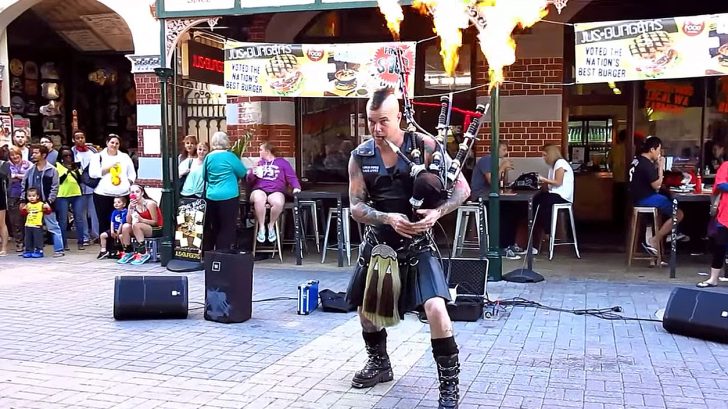 The Badpiper Puts On One Hell Of A Show!

Bagpipes have surprisingly fit in very nicely in the world of hard rock and heavy metal. It is an age-old instrument that has transitioned surprisingly well over to classic rock just as easily as any guitar would. It is rarely ever used, but when it is, it’s always amazing. The same goes for just about any AC/DC song.

AC/DC is undoubtedly one of the (if not THE) greatest hard rock bands ever. As you’re about to see in this video, their legacy is alive and well, it’s still badass!

“It started off from a little trick I had on guitar. I played it to Mal and he said ‘Oh, I’ve got a good rhythm idea that will sit well in the back.’ We built the song up from that. We fiddled about with it for a few months before everything fell into place. Lyrically, it was really just a case of finding a good title … We came up with this thunder thing, based on our favorite childhood toy ThunderStreak, and it seemed to have a good ring to it. AC/DC = Power. That’s the basic idea.” – Angus Young on “Thunderstruck”

What you’re about to watch is a video in which a gentleman who calls himself the ‘Badpiper’ whips out his insanely cool set of bagpipes and starts playing the hit song by the aforementioned AC/DC called “Thunderstruck”. At first, this seems like just another bagpipe cover of a classic rock song, but just wait until you see what he’s loaded his bagpipes with…

This screams hard rock in big, bold letters. The guy’s a real showman – there’s no way you will not be left in awe after watching this. There’s just too much badassery going on here. Just see it all for yourself!