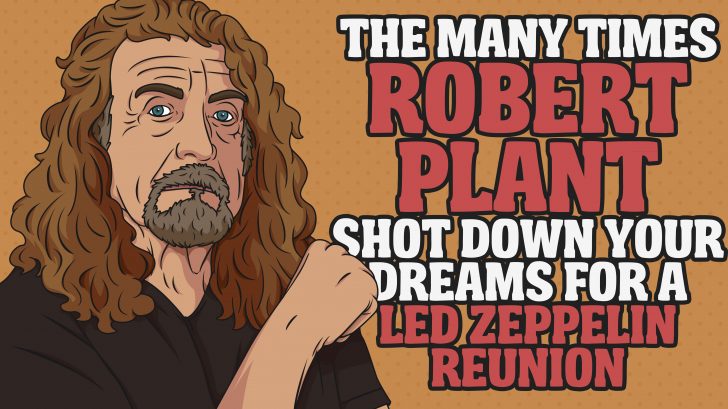 For decades now since Led Zeppelin split up, Robert plan has always been and still is being asked about getting back together with the remaining members of the iconic rock band. Every time Plant is interviewed, interviewers cannot help but ask if Plant is even considering a reunion with Led Zeppelin. And every time he’s asked, Plant gives a response in many forms but only one answer: no. And every person who asks already knows this answer but still asks nonetheless! Who can blame them? The people want Zep back! But for more than 30 years, Plant exhaustively rejects even the idea of a Led Zeppelin reunion. Let’s look back at all the times the great rock icon shot down all of our dreams to see Led Zeppelin together again:

This is the first among what would be many reunion rejections by Plant. The band had just lost the legendary drummer John Bonham, and Plant was giving his first solo interview when he was asked to state “just for the record” if the band can still be revived or if it’s already a goner for good. Plant responded by saying,

“After we lost John, we issued a statement to that effect, but everybody read it as being ambiguous. I can’t even remember the wording of it now. But no, there’s absolutely no point. No point at all. There are certain people you don’t do without in life, you don’t keep things going for the sake of it. There’s no functional purpose for keeping things going. For whose convenience? Nobody’s, really. … For all the s*** that hit the fan those many times … we all sort of rose out of it together going, ‘We don’t care – take this!’ And you don’t start carrying on with people who weren’t a part of that. Impossible.”

Plant did plan to reunite for one night with John Paul Jones and Jimmy Page for a Live for Aids set in 1985 — for a good cause. It wasn’t so much a full-scale reunion with new music and promotion and tour. By this time, Plant had already been setting himself up as a solo artist. Plant pointed out the effects of being in a band in an interview, saying

“Being in Zeppelin was like living in a goldfish bowl. Things were done on such a grand scale. The band was a perpetual-motion machine that didn’t allow me to stop and consider the values of the whole thing. My values were kind of in chaos for a while. That experience was a distortion of reality. My perspective on reality and hard work was out of line.”

In 1986, Plant played a gig with Jones and Page, recruiting drummer Tony Thompson as a sessionist for that event only. They were in the midst of figuring out the next steps in their respective careers, 8 years after they officially disbanded. The prospects were already bleak even then.

“The whole thing dematerialized,” he told Rolling Stone in an interview. “Jimmy had to change the battery on his wah-wah pedal every one and a half songs. And I said, ‘I’m going home.’ Jonesy said, ‘Why?’ ‘Because I can’t put up with this.’ ‘But you lived with it before.’ I said, ‘Look, man, I don’t need the money. I’m off.’ For it to succeed I would have had to have been far more patient than I have been for years.”

4) 1990: Detaching from his former frontman identity

Plant continued on with his solo career, releasing  Now and Zen in 1988 and Manic Nirvana in 1990. He couldn’t stray too far away from Led Zeppelin’s original signature sound as he even recruited Page to play guitar on a couple of songs on his albums. That gave people hope of a reunion once again but as Plant was already used to doing by then, he rejected the idea. He said that he no longer felt a connection with the artist he’d been in Led Zeppelin, saying

“I couldn’t go on and reinvent the spirit of the huge monster that was, because I couldn’t feel comfortable,” said Plant. “I don’t know the guy who sang in Led Zeppelin. I see some very funny pictures of him, then I see rock’s vile offspring trotting behind in Lurex pants and leather gloves with the fingers cut off.”

Plant goes on to question the value of life and the worth of it being lived in the spotlight with the past glory of his former band in the early 90s. Many offers from studios and producers were thrown their way to reunite. Not that they needed more wealth, as Plant previously stated before. Their royalties alone could sustain them for the rest of their lives. However, Plant is convinced that their creative chemistry together as a band has already diminished.

“We were great when we were great. I was part of something magnificent which broke the Guinness Book of Records, but in the end, what are you going to get out of it? Who are you doing it for? You have to ask these questions,” Plant said. “Who pays the piper, and what is valuable in this life? I don’t want to scream ‘Immigrant Song’ every night for the rest of my life, and I’m not sure I could.”

6) 2002: The rift between Robert Plant and John Paul Jones

All through the ’90s and well into the early 2000s, Plant had been patiently and professionally rejecting the world’s pleas for Led Zeppelin to reunite. Not that he’s helping the curiosity and hunger die down, as he often stroke the hopes for a reunion, flirting with the idea of the possibility every now and then. He did record two albums with Page in the ’90s but it drove Plant and Jones apart along the way. Plant admitted that,

“That was it. No cards, no hellos. I apologized and went to one meeting and got on one knee as he was walking out, to tie my shoelace as well, and said, ‘John, surely now we’re way too old for this?’ But he just sidestepped me and walked out. But I love him and want you to know, John, that if you have me back, we can go back to the one card a year.”

Plant acknowledged in 2011 the freedom he’s enjoyed over his solo career against the limitations that would have constrained him had Led Zeppelin stayed together.

“Most people have told me to do the obvious thing as far as my career goes. Which would have sent me tottering into the abyss,” said Plant. “I mean, some people get into a groove and they stay with it indefinitely. And what starts off as a great moment of explosive passion can end up as cabaret 25, 30 years later. It just depends on whether you go and find the right habitat to extend yourself.”

In 2012, when Jones, Page and Plant did press to promote Celebration Day (the package commemorating their 2007 reunion set) of course a barrage of the same band reunion curiosity flooded them. Plant was really over it, and answered in a more blunt way than he has ever answered the same question before.

“You have to be creative and imaginative and move on. And I think the great essence of Led Zeppelin is the creativity and imagination that developed with each project. And a project is a project, it’s not just going back and revisiting the past, it’s moving forward,” Plant insisted while in a joint interview with Jones and Page. “I don’t see us being a stadium act … going round and round making everyone feel great playing the hits.”

Plant also pointed out that if they did do anything together again, it would only be because all three surviving members wanted to. “If we’re capable of doing something, in our own time, that will be what will happen. So any inane questions from people who are from syndicated outlets, you should just really think about what it takes to answer a question like that in one second. We know what we’ve got, you know.”

In 2014, Plant was promoting his album lullaby … and the Ceaseless Roar solo outing, and was once again facing the same questions about a Led Zeppelin reunion that he’s being asked for 4 decades at this point. When Rolling Stone asked why a tour did not materialize after their Ertegun tribute, Plant said he was more interested in making art than making cash.

“A tour would have been an absolute menagerie of vested interests and the very essence of everything that’s s***ty about big-time stadium rock,” Plant said. “We were surrounded by a circus of people that would have had our souls on the fire. I’m not part of a jukebox!”

When asked the same year to weigh in on the chances of another Zeppelin concert, Plant bluntly said, “zero.”

It’s been going on 40 years since Led Zeppelin split but Robert Plant still cannot dodge any question about the possibility of a Zep reunion and honestly at this point, he has to be an expert at answering the most redundant question of his long career. While promoting his new LP Carry Fire, he gave an interview with the Daily Telegraph and was yet again slyly asked if he was putting together some sort of project with Jones and Page. The man just wants to move on, really.

“You can’t ever really go back. It’s tough enough repeating yourself with something that’s a year old, never mind 49 years old,” said Plant. “I’ve got to keep moving.”