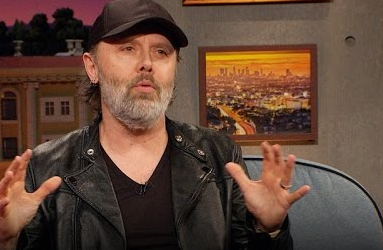 via The Late Late Show with James Corden / Youtube

Ulrich overcame all that was hurled at him, however, and went on to have a phenomenally successful career and earn the title of “god of heavy metal.” He survived the storms to come out a bigger man, even when the tough days were exceptionally terrible. Here are some of the most devastating aspects of this person’s life, who set out to make his own unique contribution to the rock world and unquestionably succeeded in doing so despite all odds.

He Failed to Succeed in Becoming a pro-Tennis Player.

Lars Ulrich, the drummer for Metallica, had aspirations of a quite different future as an athlete years before he became a founding member of one of the greatest metal bands of all time. The Danish immigrant, however, was rudely awakened after moving to the United States with his family. Ulrich stated in a Metal Hammer interview,

Ulrich abruptly changed his direction from following the same career as his father, Torben, as a result of the epiphany. But the setback just fueled his desire to become a successful artist and write songs that were influenced by bands he adored, including Iron Maiden and Motorhead.

At First, He Was a Terrible Drummer.

When Lars Ulrich realized that a professional tennis career was not in his destiny, he focused all of his time and efforts on drumming. The fact that the other musicians who would subsequently become Metallica were not at all pleased with his abilities presented a serious obstacle to this strategy at first. In 1981, James Hetfield and Ron McGovney lost their drummer, Jim Mulligan, and organized tryouts to find a replacement, as reported by Joel McIver. Ulrich was one of those who responded to the request to try out, something the two must have afterward regretted. According to McGovney,

“I thought Lars was the worst drummer I had ever heard in my life!” The bassist went on to explain, “He couldn’t keep a beat, and compared to Mulligan, he just couldn’t play. So, I told James, ‘This guy sucks, dude.'”

James Hetfield Treated Him Differently Because He Was a Foreigner.

Lars Ulrich and James Hetfield collaborated on songs prior to forming Metallica. That implies that things did not turn out as expected. Ron McGovney’s concerns about the drummer’s performance and the newly arrived Dane’s obvious cultural differences infuriated Hetfield. Playboy overheard the potential frontman saying,

“There were so many different things about him. His mannerisms, his looks, his accent, his attitude, his smell. He smelled — he smelled like Denmark, I guess. They have a different view on bathing. We use soap in America.”

Metallica’s Other Members Thought about Kicking Him Out.

Lars Ulrich joined James Hetfield, Ron McGovney, Dave Mustaine, and the other original members of Metallica in 1981. But early on, Cliff Burton and Kirk Hammett replaced McGovney and Mustaine, causing a significant lineup change. The problems behind-the-scenes seemed to have been resolved to the majority of spectators, but it turns out that the drama persisted and almost resulted in Ulrich’s departure as well.

The leader of Anthrax, Scott Ian, became acquainted with all four of them when touring with Metallica in 1986. Ian was therefore disappointed to find that Ulrich will be replaced as quickly as possible by the other band members. Burton’s unexpected passing soon after prevented that from occurring, and the tale went mostly untold until Mustaine was questioned about it by Rolling Stone years later. Later, the guitarist stated,

“That’s what Scott told me. He said that when Metallica got home, that James, Cliff and Kirk were going to fire Lars.”

When Cliff Burton sadly and unexpectedly passed suddenly in 1986, Lars Ulrich suffered deeply, much like the other Metallica band members. When the band’s bus collapsed in the middle of the night while on tour in Sweden, all four of the passengers were sound sleeping. Joel McIver writes in his book “Justice for All: The Truth about Metallica” that despite the massive van flipping onto its side, James Hetfield, Kirk Hammett, and Lars Ulrich all managed to escape the collision with just minor wounds.

Their Producer and Bandmates Were Annoyed by His Personality.

Viewers watching the 1992 documentary “A Year and a Half in the Life of Metallica” would probably note that Lars Ulrich’s method of music production wasn’t always well-liked by his comrades. Jason Newsted, the newest member at the moment, was particularly irritated since the manner in which things were done was so unlike from his experience.

The bassist complained to The Guardian about the behavior of his new bandmate.

Since Lars Ulrich’s parents, Torben and Lone, were always friendly and supportive of their only son, the little family was quite close. When his mother unexpectedly passed away in 1998, the drummer was upset. In his book, “Justice for All: The Truth about Metallica,” Joel McIver explains how Lone battled a bad case of cancer for a while until she lost the ability to do so and passed away.

The Music Business That Failed.

In 1998, Lars Ulrich and Tim Duffy, Metallica’s former tour accountant, founded a significant side project. The Brand New Immortals, DDT, and Goudie were among the bands that this new record company, the Music Company, an imprint of the big studio Elektra, signed. None of these bands, however, were able to amass a sizable audience. On the other side, Systematic, a signing from California featuring Paul Bostaph, a former Slayer drummer, was more successful. The band sold over 70,000 copies of “Somewhere in Between,” their debut album, in just two years.

He Is Struggling With Hearing Problems

Because of his years of performing as a heavy metal drummer, Lars Ulrich has experienced serious hearing issues for a very long time. He first became aware of the severity of the problem as a consequence of a severe case of tinnitus that began when he was on tour in 1988, primarily as a result of his failure to use any protection early in his career. The ringing was so loud that he thought it was the TV when he started to awaken to sounds that weren’t actually in the room.

Has Had Two Divorces

Lars Ulrich still experiences heartbreak despite being a rock star in an influential heavy metal band. Actually, the drummer went through two trying divorces. The other Metallica members were reportedly going through the same thing as Ulrich after the first divorce with Debbie Jones in the late 1980s, according to the Mirror. Ulrich then went through his second divorce with Skylar Satenstein in 2004. The drummer didn’t appear very disturbed, perhaps since it had already occurred to him..

It was particularly difficult for Ulrich to see the abrupt passing of the Danish bassist for King Diamond and Mercyful Fate in 2019. The artist expressed his gratitude to the individual who had had a significant impact on his career by writing,

“Incredibly saddened to hear the news of Timi Hansen’s untimely passing. He was not only a close friend of mine and a close friend of the band’s, but he was part of a musical force that helped shape Metallica’s sound, direction & desire to be in a hard rock band.”

He Has Often Drawn Criticism for His Drumming Throughout the Years.

Lars Ulrich has more than earned the right to be regarded as the founding drummer of an epic metal band, despite initially failing to persuade James Hetfield that he had what it took to become a rock star. Nevertheless, despite how much he is regarded and adored by Metallica, some people have continuously spoken out against his purported lack of skill. He revealed this to the fan publication So What! It was brought up by various interviewers and remarked to him,