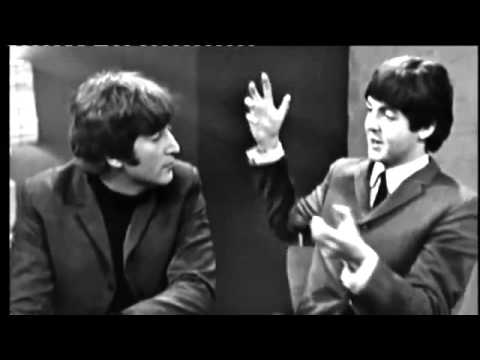 At a festival at Woolton’s St. Peter’s Church Hall in 1957, John Lennon and 15-year-old Paul McCartney got to know one another. The two bonded over their common love of rhythm and blues and got along like a house on fire. McCartney first joined John Lennon’s band, The Quarrymen, as a rhythm guitarist after the two of them discovered they clicked as friends and musicians.

When visiting his aunt Mimi Smith, McCartney was quoted as saying that he used to spend hours upon hours in Lennon’s bedroom listening to classic rock ‘n’ roll records by artists like Chuck Berry, Fats Domino, and Jerry Lee Lewis. This was stated in the 1997 book Paul McCartney: Many Years From Now by Barry Miles. They played and sang along with the records, and eventually found the confidence to write a few songs on their own.

“It’s a lovely thought to think of a friend’s bedroom then,” McCartney pondered. “A young boy’s bedroom is such a comfortable place, like my son’s bedroom is now; he’s got all his stuff that he needs: a candle, guitar, a book.”

However, he added, there was a drawback to playing in Lennon’s cramped bedroom.

“Physically, it was always a bad idea for us to sit side by side on the bed in his bedroom,” he recalled. “The necks of our guitars were always banging.”

I Call Your Name, one of the most famous early songs that Lennon wrote in his bedroom, rose to fame when it was recorded and published by The Beatles in 1964. The Beatles continued to perform live sets that were primarily made up of cover songs at the beginning of the 1960s, even after lead guitarist George Harrison joined the group. Although the Lennon-McCartney body of work was steadily growing, they weren’t yet confident enough to fully emerge from behind covers.

On February 28th, 1963, while riding in their tour bus, the duo came up with the song for what would later become their first UK number-one hit.

“The night Paul and I wrote ‘From Me To You’, we were on the Helen Shapiro tour, on the coach, travelling from York to Shrewsbury,” Lennon once recalled of the song (via Anthology). “We weren’t taking ourselves seriously – just fooling around on the guitar – when we began to get a good melody line, and we really started to work at it.”

“Before that journey was over, we’d completed the lyric, everything,” he added. “I think the first line was mine and we took it from there. What puzzled us was why we’d thought of a name like ‘From Me To You’. It had me thinking when I picked up the NME to see how we were doing in the charts. Then I realised – we’d got the inspiration from reading a copy on the coach. Paul and I had been talking about one of the letters in the From You To Us column.”

“I remember John and Paul coming up to me to ask if I would like to hear a couple of songs that they had just written,” remembered Shapiro. “They were looking for opinions because they were undecided about which should be their next single. We crowded around a piano and Paul played, while the two of them sang their latest composition. One was ‘Thank You Girl’, and the other was ‘From Me To You’, which I liked best.”

The Beatles intended to release ‘Thank You Girl’ as a follow-up to their second single, ‘Please Please Me,’ which had just been released. However, after the writing session, while stuck in traffic and with Shapiro’s support, they made the decision to change their minds.

“We’d already written ‘Thank You Girl’ as the follow-up to ‘Please Please Me’,” Lennon recalled. “This new number was to be the b-side. We were so pleased with it, we knew we just had to make it the a-side, ‘Thank You Girl’ the b.”