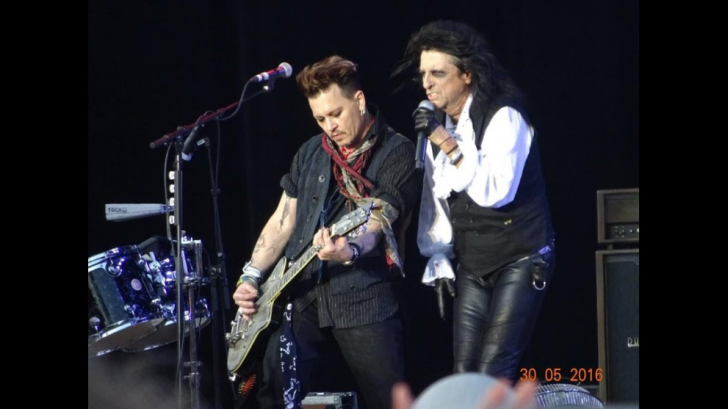 During a podcast interview with Rhino Podcast, the rock n’ roll’s villain Alice Cooper joins host Rich Mahan to talk about his favorite moments with Frank Zappa, the band’s early days in Detroit, and the formation of the Hollywood Vampires and more.

ON HIS CURRENT SELF-QUARANTINE SITUATION:

COOPER: “We’re in Arizona. I’ve got three studios here in the house. Yeah. One is when are we using today? Today we’re using the radio studio, but we have a full recording studio upstairs and a voiceover studio in there. So we’ve been, we’ve been doing a lot of stuff here.”

ON LIFE IN SELF-ISOLATION:

COOPER: “I mean, I’m not used to having time off like this. It’s weird to have five, six months off. It’s very foreign to me. No, no. Well, you’re, you’re typically an incredibly busy person you’re, you know, remained at this high level of creative output your entire career.”

MAHAN: “You’re typically an incredibly busy person. You know, remained at this high level of creative output your entire career. How do you do it?”

COOPER: “Well, it’s so weird at 72, I did not think I would be in two touring bands. You know, I figured, you know, and I always said from the very beginning, I will retire when nobody shows up. If I do a concert and nobody shows up, that’s kind of your cue to stop, you know? But they’re all showing up, so we’re good.”

ON HIS EARLY DAYS AS A MUSICIAN:

MAHAN: “Didn’t your manager, Shep, see you after you had cleared a room and said, ‘I can use this’?”

COOPER: “Yeah, well, him and Frank Zappa and, some of the GTOs. And, I think Steve McQueen was there also on acid, standing there going, ‘What?’ Cause that was 1968, you know?”

ON HIS APPEARANCE IN THE DOCUSERIES LAUREL CANYON:

MAHAN: “That new Laurel Canyon documentary that Alison Elwood just produced premiered on Sunday – the first part. And of course you’re in there. You’re not a name that’s typically associated with Laurel Canyon.”

“So everybody kind of lived right in that area right there. And Frank was producing us, you know, so I had total access down there to that place. Uh, yeah. And, you know, watching Frank work was really interesting because it was like, he was kind of like a Mel Brooks, nobody was out of bounds. Everybody got equally insulted, you know, and I always thought that that was a great thing.”

ON THE FORMATION OF THE HOLLYWOOD VAMPIRES:

“Well, I was doing Dark Shadows with Johnny [Depp] and I’d never met Johnny before, but I knew he was a guitar player. And so I met Johnny, we got along great. You know, he was very cool, one of the nicest people you’d ever meet in your life and really cared about his art. You know, when he was playing the character, he was that character.”

“Then we had dinner one night and I started telling him about the Hollywood Vampires – you know, the original guys, John Lennon and Keith Moon and Harry Nilsson and all the guys who were pretty top to all of us. And he said, ‘You know, it’d be great to put a band together to sort of tip their hat to all of our dead drunk friends,’ and right there, I said, ‘That’d be just fun to have a bar band just to go around LA and play bars.'”

You can listen to the rest of the podcast here.