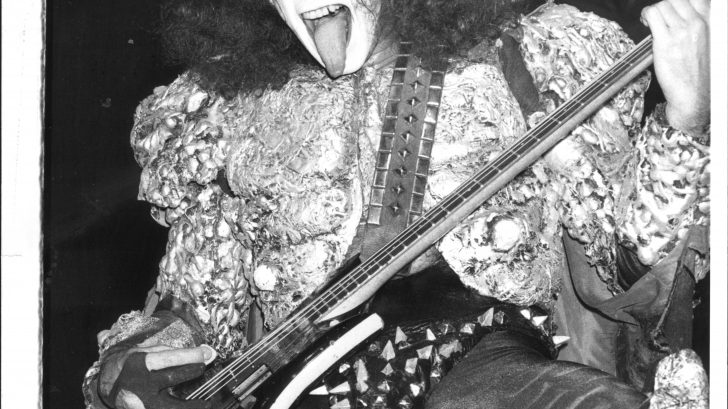 The worlds of music and comics have converged on many occasions for decades. We have been able to enjoy many biographies in the graphic novel format of bands like AC/DC, GUNS N ‘ROSES, or THE ROLLING STONES.

Stories have been told about the fifth Beatle. We have been able to see ALICE COOPER being the protagonist of a thousand adventures or geniuses like ROB ZOMBIE writing their own comics.

But if there is a band that has managed to extract oil from such a fruitful relationship, it is undoubtedly KISS. The American Hard Rock band has been appearing in the ninth art since the 70s, and some of their comics are true pieces of history, about which there are a thousand and one legends.

KISS’s first cartoon appearance was as a cameo in the Howard the Duck collection. We are not exaggerating if we say that the series written by the irreverent and badass Steve Gerber was one of the most surreal and transgressive on the market. The group barely appeared in a couple of pages of each issue and it did so as a product of the feathery protagonist’s nightmares: Howard was locked up in a madhouse, and as a result of his delusions, the quartet appeared in all its glory by maestro Gene Colan.

Coinciding with the launch of “Love Gun” in June 1977, Marvel launched a new collection in Magazine format where it would mainly adapt successful films or series. However, the first issue was dedicated to KISS. The band would enter fully into the fictional universe of the publisher and would meet characters such as Doctor Death or Doctor Strange. These specials were made by first-rate artists such as Steve Gerber himself, Sal and John Buscema, or John Romita Jr.

That same year, 1977, Marvel Comics published a full-color comic in magazine format, entitled ‘A Marvel Comics Super Special!’ In which the four members of Kiss were presented as super-heroes in the style of Spiderman, Batman, The Thing or Captain America, being the first in the Marvel series ‘Super Special Comics’ that saw other musicians such as The Beatles on its pages. Note the importance that Kiss gave to this comic, to the point that the blood that appears in the vignettes in which their alter-ego appears are not industrial ink, but the blood that was extracted from each member of the band by a registered nurse, witnessed by a notary public and poured into the red ink containers used to print the comic at Marvel’s Borden Ink plant in Depew, New York. Marvel also published a second KISS comic book magazine, number 5 of the ‘Super Special’ series in 1978, although it no longer had the same impact.

In 1996, Marvel released the comic ‘KISSnation’, which included interviews and photographs about the reunion of the band in fresh make-up at that time and the subsequent ‘Alive / Worldwide Tour’. ‘KISSnation’ also came with the comic ‘KISS Meets the X-Men’.

Another worth noting in this regard, especially for collectors: ‘The Kiss Kompendium’, a hardcover collection of Kiss comics released on December 8, 2009, by Harper Design. Collects the two issues of ‘Marvel Comics Super Special’, issues # 1 and # 5, the Marvel comic ‘KISSnation’, the comic printed especially for the 1995 book, KISStory, along with the comic series ‘Psycho Circus’ and ‘Dark Horse’.