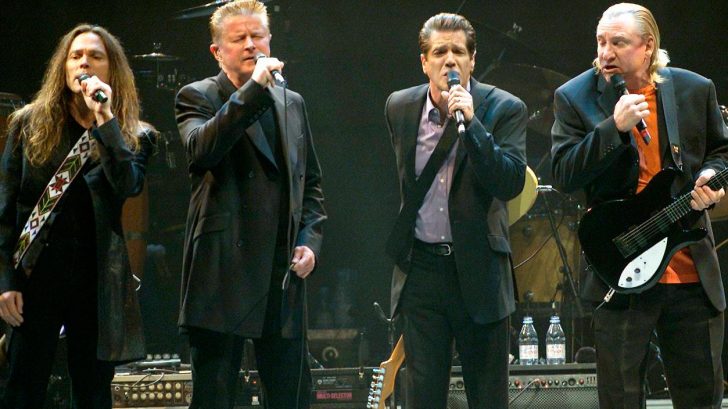 In the world of music, different professional and artistic interests are often the reasons why its members go their separate ways. Despite the time and responsibilities, there is always hope of a reunion. Things happen. Even when it seems totally impossible and almost ‘against nature’, sometimes things happen. And as happens with families and love affairs, the events of life are inscrutable and reconciliations happen in the same way as clashes.

Here’s the Truth Behind Why These Legendary Bands Reunited:

After the death of drummer John Bonham in 1980, Led Zeppelin said goodbye, leaving behind an incontestable legacy as the greatest hard rock band of the seventies. Taking into account that that was the glorious decade of the genre, it is logical to accept the British band as the greatest in history in its field.

In 1985 there was a fleeting meeting of three songs at the Live Aid festival with Phil Collins on drums, but it was not until December 2007 for the titanic return ‘in earnest’ with a single concert at the O2 in London before 20,000 lucky people. . And although with Jason Bonham -son of John- on drums they could have brought the old airship back to life, the thing stayed there. Apparently at the wish of vocalist Robert Plant, who never wanted more, versus the wishes of guitarist Jimmy Page and bassist John Paul Jones. Page has had to settle for working on the reissue of the group’s entire catalog and a 400-page photo book to celebrate its fiftieth anniversary.

Years of contained tensions were unleashed on the stage of the Long Beach Arena on July 31, 1980. Glenn Frey and Don Felder had a tremendous row in the last concert of their The Long Run tour. Between song and song they exchanged threats and cursed each other. The final touch was a guitar stamped against a concrete column. It was the end of the Eagles. At least until 14 years later.

The official announcement of the separation never came. But when Frey and Henley released their solo albums in 1982, it was clear the Eagles had dropped anchor. The band didn’t return until 1994, when they released Hell Freezes Over and went on tour. It was a tremendously lucrative reunion.

The Beatles made the whole world of music dream thanks to their extraordinary successes in the 60s, which remained in the history of rock and beyond. Still, not many remember when the band had a brief reunion in the mid-90s. Of course, only three out of four members were able to work together on that occasion due to the death of John Lennon, killed in 1980 by Mark David Chapman. In any case, The Beatles Anthology project captured the attention of millions of fans.

The Beatles’ historic first session, when they began work on “Free As A Bird”, takes place today at Paul’s Mills studio in Sussex (Mill is a converted mill on a hill, with landscaping and views of the English Channel). The past 48-track tape, work done by Jeff Lynne the month before, is filled with George’s slide guitar, Paul and George on acoustic guitars, Paul on bass and piano (which dubs John’s original piano), and the new voices of Paul, George and Ringo. The song begins with two hits on the snare drum performed by Ringo. The sessions lasted until the end of the month.

After the first recordings, Paul, George, Ringo and Jeff, who was producing the session, visited a bar where Paul’s neighbor, ex-comics cartoonist, Spike Milligan, was. These Beatles reunion sessions were going so well, according to Ringo, that instead of planning future recording week, the sessions would continue until the end of the month, where work would also begin on “Now And Then” and “Grow Old”. With Me” by John.

‘Rumours’ is one of the great albums of the 20th century. Essential. Despite the final result, the atmosphere in the recording was more than complicated because two of the couples that made up the band were separating and the tension was constant.

In 1993 Bill Clinton, whose role in what is now happening in the Ukraine carries more weight than might be expected, managed to get them together for his inaugural party. The former governor of Arkansas had used his song ‘Don’t Stop’ on the campaign trail.

The band later met several times, and at the end of the 90s they resumed activity with the same line-up that recorded ‘Rumours’. Until in 2018 Lindsey Buckingham was expelled, according to his version, because his ex-wife, Stevie Nicks, can’t stand him. The guitarist has come to compare Fleetwood Mac’s relationship with his ex to what’s going on in the Republican Party, which is still kidnapped by Trump. The former US president stars in the news to which we put the soundtrack: The prosecution presents evidence that Trump inflated the value of his properties to obtain economic benefits and among the things he inflated is his luxury apartment in New York. He said it was almost three times as big as it really is. Seeing is believing…

Deborah Harry, the first singer of a pop group that exploited her image as a sex symbol, pretty face of punk and avant-garde symbol in the New York of the seventies, returns, at the age of 53, with her group Blondie and a new album 1999, No Exit, with which they have returned to the charts.

The impudence of Deborah Harry, the extraordinary beauty of her features and the voice with which she presided over the first pop group with a girl in front, were enough reasons for her to mark an era and leave a trail that is seen more frequently every day in the world. contemporary pop. As if that were not enough, musically Blondie also marked the moment, in the mid-seventies, in a city of New York in full swing of the artistic avant-garde.

One of the most popular and successful groups that emerged in the United States in the second half of the 1960s.

Shunned in their day by music critics for their gimmicky set-up and for not actually playing the instruments on their first two LPs, the Monkees are now respected for having given modern music history an estimable collection of pop songs. , many of them essential classics from the golden decade.

After the release of the irregular “Instant Replay” (1969) and “The Monkees Present” (1969), albums that did not enjoy commercial acceptance, the one who left was Nesmith, to publish different albums with his new group The First National Band and work as a composer for different artists, including Linda Ronstadt.

The duo Davy Jones and Micky Dolenz recorded the LP “Changes” (1970), a mediocre album that became the last work of the group in its first and most fruitful stage.

Subsequently, and with the reissue of their discography by the Rhino label and the revival of the series that made them famous on the MTV music channel, the Monkees got back together and recorded LPs like “Pool It” (1986) or “Justus” (1996), totally expendable records far from their best period as a great group of singles.