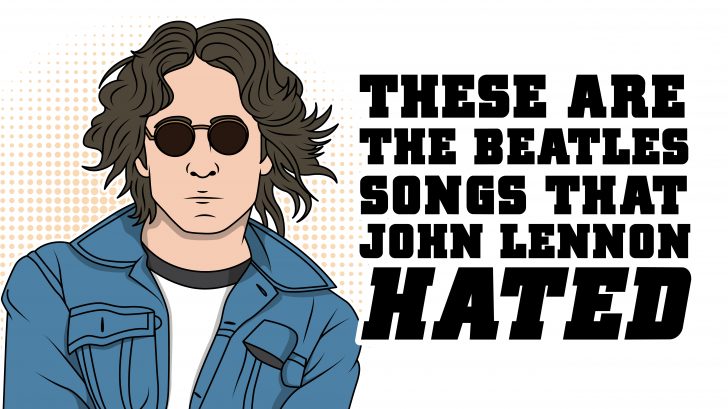 His own worst critic

John Lennon has, in the past, voiced out his musical criticisms against Paul McCartney, notably publicized in his 1971 song “How Do You Sleep”. While he did have many things to say about his songwriting counterpart’s creations, he didn’t spare himself of his own judgment. He was mostly so-so, if not harsh on his own work as well as on some of his work with his bandmates, despite all the praise, fame, and accolades they have received on their songs. The following Beatles songs shows that Lennon has many least-favorite works of his. He told Playboy in an interview in 1980,

“I feel like I could remake every f****ing one of [my songs] better”. Seriously, with the harsh words he’s said on these songs, we think John should’ve cut himself some slack.

This song was never released as a single but it was performed seven times for BBC radio between 1962-1963. The screenplay for A Taste of Honey was also said to have inspired Paul McCartney to write 1967’s “Your Mother Should Know.” What did Lennon have to say about it? He actually despised it so much that while on stage with the Beatles, he was singing “A Waste of Money” behind McCartney’s lead vocal in this track.

Recorded in February of 1965, “Yes It Is” first appeared as the B-Side track to the band’s No. 1 smash hit “Ticket to Ride”. It was also written on the same day the Beatles completed the song George Harrison wrote, “I Need You”.

“Yes It Is” featured a prominent three-part harmony, but Lennon said the song was just him “trying a rewrite of [1963’s ‘This Boy’, but it didn’t work.”

Paul McCartney wrote this song even before the Beatles were a band. His own father was turning 64 and a 15-year-old Paul wrote it on their family piano in Liverpool. It was revived in the Beatles’ 1966 sessions for Sgt. Pepper’s Lonely Hearts Club.

Lennon described this song as “granny music shit”, also pertaining to most of McCartney’s song, according to the account of engineer Geoff Emerick. When Lennon was asked who wrote “When I’m Sixty-Four”, Lennon said it was “Paul’s, completely. I would never dream of writing a song like that.”

“Good Morning Good Morning” was also never released as a single. It was initially inspired by a Kellogg’s cereal television commercial that was playing in the background. In an interview with All We Are Saying, Lennon said of the song,

“It’s a throwaway, a piece of garbage, I always thought… I always had the TV on very low in the background when I was writing and it came over, and then I wrote the song.”

This song was McCartney’s tribute to England’s “meter maids” or traffic wardens. It was recorded with very unconvential instruments used to produce particular kinds of sounds: a paper threaded through a comb, a sped-up honky-tonk piano solo played by George Martin.

Lennon said something quite selfish about the paenan to meter maids, saying,

“I’m not interested in writing about people like that,” he said in an interview back in 1980. “I like to write about me, because I know me. I don’t know anything about secretaries and postmen and meter maids.”

A popular notorious theory about how “Lucy in the Sky With Diamonds” was written and what it was about revolved around how it was a code for  “LSD”, a psychedelic drug, also having similar initials with the song title. However, Lennon insists that no drugs were used in the making of the song and that it was merely inspired by the name of his then four-year-old son Julian’s school friend Lucy O’ Donnel.  This wasn’t even a Beatles’ single initially, as it was Elton John who first released it as a cover and peaked No. 1 in the charts.

Lennon reveals in an interview,

“I heard ‘Lucy in the Sky With Diamonds’ last night. It’s abysmal, you know? The track is just terrible. I mean, it is a great track, a great song, but it isn’t a great track because it wasn’t made right. You know what I mean?”

We don’t know what you actually mean, John.

“Birthday” was written as a result of a September 1968 jam session at Abbey Road. That jam session product eventually became the opening song for the second half of the Beatles’ self-titled 1968 double album. McCartney later gave Lennon credit for 50 percent of the song’s composition in Many Years From Now.
Not that it made Lennon any less salty about it, saying,

“I think Paul wanted a song like ‘Happy Birthday Baby,’ the old ’50s hit. It was a piece of garbage.”

“Let It Be” has got to be one of the most memorable, a dare we say, most beautiful of the Beatles’ slow ballads. The track is also the title of the beloved band’s final album. It becomes a No. 1 smash hit and even had two versions released with two different guitar solos:  Harrison used a rotating Leslie on the single, and played in a more straight-forward manner on the album version. Everyone loved the song…everyone except John. He told Playboy in an interview,

“That’s Paul. What can you say? Nothing to do with the Beatles. It could’ve been “Wings”. I don’t know what he’s thinking when he writes ‘Let It Be.'”

The song was originally called “Here Comes the Sun King” but the title was shortened because it sounded similar to George Harrison’s “Here Comes the Sun”. It was the second track in Abbey Road and it featured a guitar sound that was influenced by Fleetwood Mac’s “Albatross”. Lennon combines elements of Spanish, Portuguese, and Italian into the gibberish he includes in the track. And that gibberish probably best represents what he really thinks of the song, saying,

“That’s a piece of garbage I had around”.

“Mean Mr. Mustard” was inspired by a real-life Scrooge who reportedly hid money inside his rectum. It was written during their time with the Indian meditation guru  Maharishi Mahesh Yogi. Lennon did not have much love for the unreleased track, saying,  [“Mean Mr. Mustard”] is a bit of crap that I wrote in India.”

He adds that it was a “piece of garbage. I’d read somewhere in the newspaper about this mean guy who hid five-pound notes, not up his nose but somewhere else.”