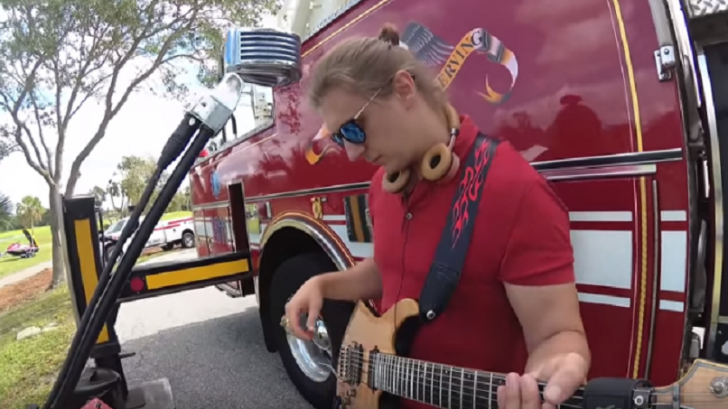 Mad Props for His Mad Skills

Welcome to the good side of technology – when it’s used to showcase impressive creativity and music skills instead of trying to coat what isn’t there (we’re looking at you auto-tune people).

According to this guy:

“When Someone (four people to be exact) requests a little Jimi Hendrix, so you try to give them a cover song with an experience, worthy of Foxy Lady. Not quite All Along The Watchtower but at least next to a fire truck with a good view of the golf course.”

And did he nail it? Well you’re gonna have to watch it before you judge. We’ve been fans of looping ever since we saw Elise Trouw’s mashup of Foo Fighters and Bobby Caldwell classics. It was jaw-dropping and mind-blowing and the same thing goes for this Jimi Hendrix cover. It’s nothing short of spectacular especially because the end result doesn’t sound like only one man played everything.

Oh and can we talk about how expensive this whole setup is? The loop station alone costs $499.99! Then again, anyone with extra cash can purchase all these gears and still not play as good as him because even if you’re not a big fan of this new tech, it’s hard to deny that this guy has some serious talent. And it’s quite heartbreaking to see that even with a small crowd, they’re not exactly that enthusiastic about his performance. If this were us, we’d probably be headbanging and rocking out.

Also, are we the only ones who think he’s giving off ’60s vibes? No, not just the way he plays. Maybe because he’s playing barefooted? It reminds us of Woodstock festival when all people cared about was music. Those were the good ole days.