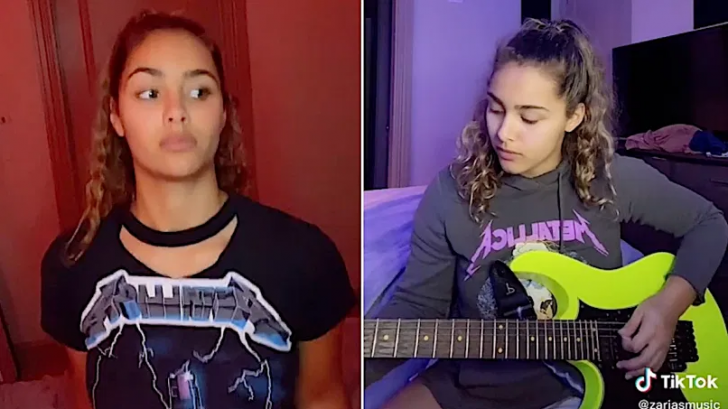 A TikTok sensation attempted to “seek and destroy” her bashers who called her out for wearing a Metallica shirt in her TikTok clips.

The R&B/hip-hop singer and dancer Zaria showcased she was a fan of the legendary band, she went on to shred some of their well-known numbers on the guitar.

“Do the Kardashians actually know Metallica and Slayer?”

So, it’s not shocking that Zaria received some lash back, with one commenter challenging her to “name three Metallica songs.”

Zaria took her answer to another level. In a clip, she blurted,

“My response to you guys is like, ‘Really, only three songs? How ’bout I play them on guitar for you!’”

She then continued to shred parts of “Master of Puppets” and “Enter Sandman”, and brought it further by continuing, “Someone’s gonna criticize me for not doing leads, so here’s that little fun thing in ‘One’.”

And yes, she played some fine finger tapping of “One”.

In subsequent clips, she took more challenges, including performing the full “One” solo and shredding through “Battery”. After receiving some media treatment, she’s now expecting that Metallica themselves notice her skills.

Keep going for the clips below:

@zariasmusicReply to @paytonnsmith I hope this video finds the #Metallica fans lol, not my best #guitar playing but that wasn’t really the point #guitarist

@zariasmusicReply to @davidgriffith970 too much reverb but u get the point. Comment suggestions and I’ll play for y’all #guitar #guitarist #metallica