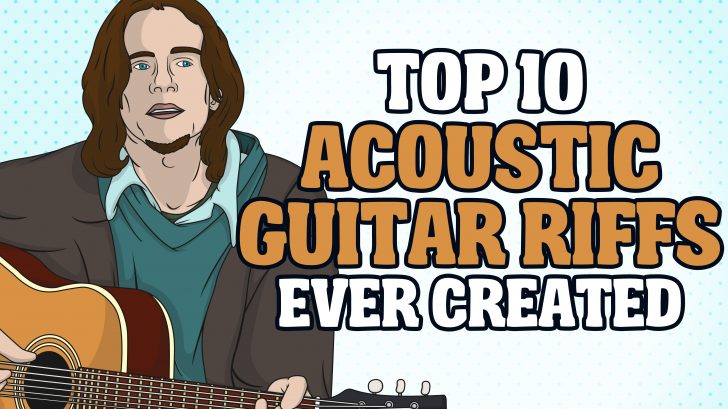 “There’s no lying with the acoustic guitar. There’s something very pure, and very humbling, about it.”

Who else could say this better than one of rock music’s guitar heroes. While he is mostly known for shredding those electric guitars like a god, and while rock songs mostly live within electric guitar sounds, the acoustic is the basic foundation of all of these amazing sounds. The acoustic is more raw, unplugged, and is stripped away of all the multi-layered effects and production, and brings out the natural talent of the player. Some of the most epic rock songs are born out of acoustic riffs and melodies.

Check out the best rock acoustic guitar riffs below:

Lovelorn, slow-paced, slow rock ballad “Patience” is one of Guns N’ Roses greatest hits. This was the song that marked the turn for the group, going more mellow, and deviating from their normally hard-rock sound. It definitely started a trend in the genre, in its use of all-acoustic instrumentation.  An amazing fact was that the song was recorded in just one single take, with guitarists Slash and Izzy Stradlin and bassist Duff McKagan playing acoustic instruments. Axl Rose, even added in his own whistling in the intro. The final two minutes stand as the band’s uniting moment, with every member singing the song title in perfect vocal harmony.

2. “Have You Ever Really Loved A Woman” by Bryan Adams

This classic ballad from Bryan Adams featured a complex Spanish flamenco guitar riff in the intro. Fast fingers are certainly required to be able to successfully pull off the riff.

The song was featured in the movie Don Juan DeMarco which stars Johnny Depp. It was following the two other movie soundtracks Bryans did. It was Spanish gutiarist Paco De Lucia who played the Flamenco guitar. The song reached even bigger success when it was nominated for an Oscar for Best Original Song. The distinct intro certainly struck a chord in many people’s hearts, especially women. Various women’s groups contacted Adams which then led to him publishing a book of photos featuring Canadian women, with proceeds going to breast cancer research.

Tom Scholz is one pioneer in guitar technology. He founded Scholz Research & Development and introduced equipment he’s developed himself to the market. His greatest contribution to music though would be his guitar riff in the intro for Boston’s “More Than A Feeling”. The riff is a lilting, arpeggiated acoustic piece that sets mood for its audience.  Another fun fact: Scholz also played ALL the guitar parts on the song.The riffs were recorded with an old Yamaha acoustic that had been sitting in the corner of Scholz’s basement studio. Good thing he picked it up, and gifted us with the treasure that is this timeless classic rock hit.

This song is probably the most famous rock song of all time. It is also the most excellent acoustic guitar riff of all time. Jimmy Page’s talent really shown on this riff. His fingerpicked arpeggios made the song Zeppelin’s anthem. Robert Plant who wrote the song was asked why the song was so popular, he answered,  “depending on what day it is, I still interpret the song a different way – and I wrote the lyrics.” He added it was “a woman getting everything she wanted without giving anything back.” With the hypnotizing acoustic guitar riff and the mystical meaning of the lyrics, it became most requested song on FM radio stations in the United States in the 1970s. It’s also part of Rolling Stone magazine’s list of “The 500 Greatest Songs of All Time”.

A list about acoustic guitar riffs would not be complete without an entry from Eric Clapton, guitar god extraordinare. It has one of the most recognizable guitar intro riff of all time, but the song roots from a tragic accident. In 1991, Clapton’s four-and-a­ half-year-old son Conor died when he fell out of his mother’s 53rd-floor apartment window, landing on the roof of the building next door. Clapton wrote “Tears in Heaven,” recorded with a pain-stricken voice, and an emotionally yet beautifully played backing guitar. Clapton recorded a concert on acoustic, for MTV’s Unplugged series. When that Unplugged performance was released as a record, it became Clapton’s best­-selling record of all time.

Pink Floyd rose to the top to become world-renown prog-rock stars after the massive success of their album The Dark Side of the Moon. In spite of their success, they still had void that was left by their founding father and original guitarist Syd Barrett who made a decision to depart from the music industry altogether to focus and painting and gardening. Barrett’s practically innovated his own guitar work and even explored experimental techniques such as dissonance, distortion, and feedback that many musicians now use. As a tribute to Barrett, Pink Floyd wrote and recorded several songs about him but the most popular one is “Wish You Were Here”, which features a classic guitar riff on acoustic. Guitarist David Gilmour successfully droned through several chords in the song, which would later on be used even in heavy rock music.

Blackbird is one of the most popular hits of the Beatles. It’s also one of the most raw and simple. During the recording, only Paul’s voice, his Martin D-28 acoustic guitar, and a tapping that keeps time were present. The birds were dubbed in later using sound effects from the collection at Abbey Road, where they recorded the song. The guitar riff was highly inspired by Bach’s Bourrée in E minor that was supposed to be played on the lute. The baroque instrumental is also often played on the classical guitar, an instrument Paul McCartney and George Harrison learned growing up.  McCartney explained,

“We had the first four bars (of the Bourrée in E minor) and that was as far as my imagination went. I think George had it down for a few more bars and then he crapped out. So I made up the next few bars, and (sings his four-note variation Bach’s theme) it became the basis of ‘Blackbird.’

The riff now has one of the most famous finger style tunes on acoustic guitar.

“Dust In The Wind” – Kansas

This song was born when Kansas guitarist Kerry Livgren was hear by his wife practicing finger exercises on his acoustic guitar. She encouraged him to write a song around these exercises and he did. The result of this encouragement was “Dust in the Wind.” The complex and rich acoustic riff had people assuming that the song may have been recorded on with a 12-string acoustic but it was actually played by multiple six-strings played by Livgren himself and co-guitarist Rich Williams.

The song has since become something of a pop culture touchstone, often used in soundtracks for popular TV Shows and movies.

This timeless James Taylor song is not only beautifully plucked on acoustic, but also plucks a heart string every time you hear it. It’s also somewhat autobiographical, as the song comes from Taylor’s emotional center: his life. That includes his struggles to overcome depression and drug addiction, dealing with fame, and dealing with the suicide of his childhood friend Suzanne.

Taylor reveals, “The thing is, I wrote that song in 1970, I just hadn’t seen that much back then, mostly fire and rain. So that’s why I keep saying it over and over again since then.”

Even if it stemmed from somewhere dark and tragic, it definitely translated into something beautiful, and one of the greatest acoustic hits of all time.

JBJ and Richie Sambora performed an acoustic performance of “Wanted Dead or Alive” for the 1989 MTV Video Music Awards, and because of them, the Unplugged series of network was born.

New Jersey sure can boast about their homegrown band as pioneers of a series. But they can also boast about the talent that the band showcased in this performance. Sambora lays down impressive acoustic finger work. He rolls out descending arpeggios and bluesy bends in his riffs. JBJ sings a fusion of blues-rock-Old Western on top of it and the final product was a massive smash hit.