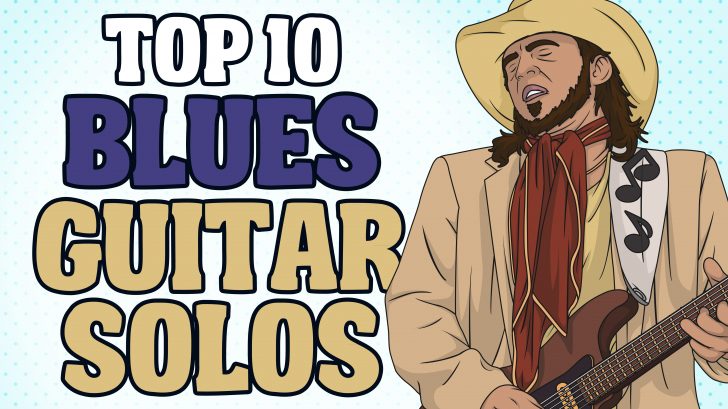 These Solos Get To You

Have you ever stopped to think what the world would be like without the blues? How would we go on living without hearing the music of legends like Stevie Ray Vaughan and B.B. King? Will any other genre fill the void? This is pretty much like never knowing what peanut butter and jelly tastes like – it’s missing half of your life.

These musical gems will make you feel things – excitement, sadness, awe. And they’re not all about being fast and flashy. Their guitar work is nothing short of mesmerizing and there’s so much heart and soul into every note. To be honest, there are more than 50 great blues guitar solos out there and all of them are epic masterpieces. So yes, it wasn’t easy trying to boot out our favorites one by one.

This makes you want to close your eyes and shut out the world. At times like this, music is the only thing that matters. And Eric Johnson shows us how blues should be done. This guy is the real deal. This is blues at its best. And yes, we can only wish we can still hear stuff like this on the radio instead of all those auto-tune crap.

“I’ve always had a dream of the electric guitar sounding elegant. I thought, Wouldn’t it be cool to get Wes Montgomery’s tone, but through a Marshall on 10? It’s kind of like an antonym: ‘I want a pure distortion.’” – Eric Johnson

That searing solo is a real gem. However, we still have a problem with this track – it’s way too short for something this good. This can go on for 40 minutes more and we wouldn’t mind. Actually, scratch that.

We could listen to this all day long.

“Blue on Black” made people listen to and appreciate the blues. And Kenny Wayne Shepherd really delivered the goods here. He managed to pull it together and that solo will just make you want to start learning how to play the guitar. It will give you goosebumps. This guy is keeping the blues alive.

He’s got massive talent, that’s for sure. And the live version is so much better than the recording. Although, we still love listening to both.

“The success at rock radio that we had early in my career, with ‘Blue on Black,’ I think we set a record. When that song was out, it definitely helped expose my music to a wider audience, and also, by gaining that exposure, then I get to turn a lot of those people on to the blues who may not have listened to the blues otherwise.” – Kenny Wayne Shepherd

It was released 10 years ago at a time when blues wasn’t exactly the thing. Thank the heavens for Shepherd. People should appreciate this genre so much more.

Are we really going to argue that Eric Clapton’s a guitar god? Nah, that’s already a given. Unless you’ve been living under a rock for decades, chances are, you already know about his mad axe-wielding skills. This epic track showcases Cream at the top of their game and Clapton slayed this jam.

The raw sound, his energy – watching this is almost like a spiritual experience. No one can replicate this level of playing.

“I always play into the unknown. I don’t practice things that are known to me unless I’m getting ready to do live work. Most of the time, it’s abstract, like picking up a pencil and paper and drawing what’s in front of me. It’s improvised, always.” – Eric Clapton

Eric Clapton made sure he won’t be outdone or upstaged by anyone. That solo is everything. So groovy and addicting! And it makes you want to listen to more blues music.

When watching this, don’t forget to breathe. It’s magical, to say the least. Joe Bonamassa definitely came through with this. Don’t worry if you found your jaw on the floor with that solo because we can totally relate and it doesn’t even pain us to admit that we’re just in awe of this guy.

You can just imagine how the audience must have felt hearing this live. It’s spectacular!

“I still get people that say I’m too young to play the blues. I’m 40 and I’m cranky! At the end of the day, I think having some life experience is helpful to play any kind of music. The more laps around the sun you have… the deeper the music gets.” – Joe Bonamassa

That was so flawless! If you’re looking for faults here, you won’t find any. Joe Bonamassa is clearly one of the best blues guitarists today and you don’t need to look far to know why.

The fact that T-Bone Walker influenced almost every big name in blues says a lot about him. And it’s a shame that he is still underrated even if his skills on the guitar remains unmatched. Whoever your favorite blues guitarist is, he’s most likely been influenced by T-Bone Walker directly or indirectly.

His solo in “T-Bone Shuffle” is not something you’d want to listen to just once. When you do, your life will never be the same.

“Well, actually my name is not T-Bone, it’s Thibeaux. And I was working with Lawson Brooks, and there was a big Jewish fellow, he was the manager of the band, and he always called me T-Bone instead of Thibeaux. So I was stuck with it, which I think is all right.” – T-Bone Walker

This and “T-Bone Boogie” made him popular. Although to be honest, he deserves way more credit than what he actually got. This solo is enough to convince anyone that he’s a titan in blues.

Ladies and gentlemen, witness how the master did it. Buddy Guy will blow your mind. And after the song’s over, you wouldn’t know what hit you. Besides, he has so many gems in his catalog that we found it challenging trying to pick his best solo.

This sizzling number will hook you to the blues, if you’re not addicted to this type of music yet. No one does it like him. He can outplay anyone and we mean, ANYONE.

“That’s what’s happening with the blues. Now, the young people don’t know nothing about it unless — I know satellite [radio] do play blues, but we need more than that.” – Buddy Guy

This will send chills down your spine. How can something this good exist? He is practically untouchable and well, he has no peers. There are blues legends then there’s Buddy Guy who’s on another level. Protect him at all costs.

Where do we even begin with Gary Moore? This solo is just one among numerous electrifying records which raised the bar for every other blues guitarist. It’s peppered with magic and it’s easy to tell how passionate he was about music. He’s loving every single moment on stage!

It’s crazy just how good he is and we can’t get enough of this piece too. It’s sizzling hot!

“I wanted to capture more of the energy of my live playing… If you record after a tour, your playing is strong, your chops are up, your energy is up, your inspiration is there, and you’ve got ideas for songs. So the best thing to do is get in and make a record as soon as possible— before that post-tour energy dies off.” – Gary Moore

He was far from your average guitarist. He had so much feel which is evident in this solo. It’s mesmerizing and hypnotic. We dare you to listen to this just once and not put it on repeat because that’s way harder than it seems.

This is what talent looks like. And boy, Stevie Ray Vaughan had a bucket full of it. He’s phenomenal and when he plays, we cannot even begin to describe his level of awesomeness. In “Texas Flood,” SRV managed to perform one of the greatest solos in history. Here’s a spoiler – it melted everyone’s face off.

That was a once-in-a-lifetime experience for his audience. They will never witness such greatness ever again.

It’s raw, powerful and unrestrained. It just can’t get any better than this. SRV had that distinctive guitar sound that’s difficult for any other guitarist to duplicate. And there was not even that much effort, it just poured out of him.

This is what getting punch in the face feels like. There are only two things about this solo – you either love it or you have hearing problems. Stay away from anyone who says they don’t like this because you don’t need that much negativity in your life. Besides, who wants to be near people who are tone deaf and with poor taste in music to boot?

Everyone wants to be as good as Elmore James. Or even just a touch of his talent.

His playing is so funky that you just want to learn all of it. Every note is spot on and maybe part of it is because he always poured his heart out. Even listening to his recordings already feels like a religious experience.

When B.B. King plays, you keep quiet. It’s not because you want to but, he just renders you speechless. It’s always so smooth and flawless. Remember the time he broke a string and changed it mid-performance? He didn’t even miss a beat! That’s what it means to be a guitar god.

And there’s no better song that showcases his massive talent in guitar playing than “The Thrill is Gone.” Oh and let’s not forget how gifted he is in the vocal department too.

“Funny thing, I used to see kids going to dance, going to places. And I was almost at that time always interested in the guitar more than even girls. When I’d see guys and girls going to movie theaters, I never did. I’d be fooling with the guitar.” – B.B. King

We can only dream that ‘fooling with the guitar’ means we could actually reach this level of greatness.