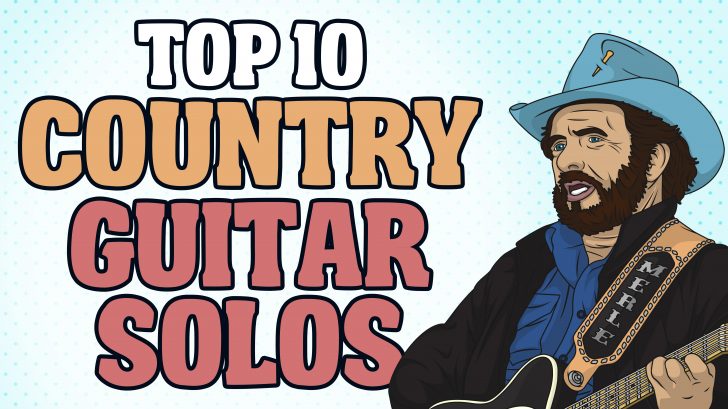 Whether you’re a country fan or not, you will find these solos mesmerizing and astounding. And they will make you want to start playing the guitar. You see, it’s not always about the speed. More often than not, it’s about the feel. And the following artists just took their music to another level.

They’re timeless and they raised the bar in guitar playing. And they inspired countless other guitarists even from other genres.

So sit back and enjoy some of the greatest solos in country music.

If this doesn’t impress you then nothing else will. There are guitarists who aren’t the least bit flashy, well Joe Maphis is the complete opposite. Then again, he delivered the goods so we’re not complaining. Besides, he wouldn’t be called “The King of the Strings” for nothing. Yep, he’s the flashiest of them all. And it will leave you breathless and in awe.

“A lot of people don’t realize, what he is best known for is being a guitar player, but it really comes from him being a fiddler, which he started there in Cumberland. That is where he developed his own guitar style.” – Jody Maphis

He practically created country shredding – something no one thought was even possible. And he flaunted his double-neck guitar even before Jimmy Page was starting to learn his.

As a session player, he was constantly in-demand and widely known. And his solo in “Flying Fingers” will explain why.

Albert Lee is phenomenal, enough said. He is one of the best that country has to offer. His virtuosity shows each time he steps up to the stage to play. He has performed alongside some of the greatest musicians of all time and to top it all off – he’s a shredder too.

We don’t mind watching him play all day long especially if he shreds that solo in “Country Boy.”

“In all the breaks in “Country Boy,” there are certain things I will go to. But even though I start out playing something I’ve played before, it always ends up being different. It’s the nature of my playing.” – Albert Lee

He’s not as popular as Eric Clapton so we can consider him underrated. But talking of skills, talent and musicality, he definitely belongs up there with the greats. Watching him play is enchanting. The man knows how to weave a spell on his audience.

Phil Baugh is a guitar extraordinaire who manages to pull out some pretty impressive sounds from his guitar. Watching him perform is almost like an out-of-this-world experience. It’s difficult to find the right words to describe how he does his solo in “Country Guitar.”

One thing’s for sure – it will make you feel things. And then you will wonder why you never stumbled upon this little gem early on.

“His unique sound stemmed from his invention of the “Phil Baugh Pedal,” comprised of six pedals that bent the strings of an electric guitar to produce sounds similar to that of a steel pedal guitar.” – AllMusic’s Sandra Brennan

His style and technique remain unmatched. This solo is basically his gift to humanity. So do yourself a favor (if you haven’t listened to it yet) and put it on loop. It’s going to feel like you just discovered a whole new world. Yep, it’s mind-blowing like that.

One of the greatest guitarists in country today is Brad Paisley. And the best part is, you can hear some of his influences in this song. It’s hands-down epic. He definitely deserves all the recognition and credit he got. The man has talent – a bucket full of it.

Some people think he’s way overrated but we beg to disagree. His music is good and he’s a fine axe-slinger too. This solo will surely convince you.

“Robben Ford is a huge influence on me, and it’s a tribute to him. I loved SRV, but when I hear him, I think, “Well, that’s as good as you can do that,” so I have never spent time trying to cop his style.” – Brad Paisley

His dedication to his music is impressive and he’s one of the few artists who go all-out in every performance, every song. His solo in “Throttleneck” is no exemption.

Marty Stuart is heaven sent. That’s pretty much a given. But when when two guitar greats share the stage and rip one of the finest country guitar solos ever, you know you’ve just found a musical treasure. It’s a blazing number that will leave you mind-blown and wanting for more.

It’s like they transported you to another dimension because obviously, no mere mortal can manage to pull it off.

“What it basically amounts to is, we plugged into the roots system of American music, and that’s a very powerful place to plug in. It’s beyond trend. Like we were talking about Tom’s work, it’s an evergreen place. If you handle it right, [it’s] instant classics, and that’s a great place to come from.” – Marty Stuart

As far as solos go, we cannot leave this out. That would be unthinkable. Besides, we’ve been watching this a couple of times now and it still mesmerizes us.

That guitar tone is unbelievable. But the fact that it came from Steve Morse,we’re no longer surprised. The man’s a beast at the guitar and his axe-wielding skills deserve to be praised over and over again. He’s undoubtedly one of the best country picker to ever walk the earth.

He’s versatile and it always seems like he only gets better and better every time. How is that even possible?

“One of the things where I do compromise is the solos. Sometimes if there’s a melodic solo part of Ritchie’s or one the people can sing along to then I do it like that. But in almost every solo where I do that, I go off.” – Steve Morse

He’s a guitar god and it’s solos like this that make you thankful for his existence. His playing is just wicked and he can easily fit in with any other legendary musician you put beside him.

Beautiful voice and great guitar work – that’s Vince Gill for you, ladies and gentlemen. Even after decades of performing, he clearly still has it. We’re happy he hasn’t retired yet because we could seriously listen to him all day long. He’s always killing it in his live performances!

He’s the total package, that’s for sure.

“I had a pretty good, diverse bunch of music to draw off, so I have a reverence for the generations before me and a healthy respect for those folks, [especially] getting to meet some of those folks who were the real pioneers and the patriarchs of this music.” – Vince Gill

It just doesn’t get any better than this. We can’t believe it was released more than 25 years ago because it still sounds so fine and smooth. This is definitely one of the best that country music has to offer. It’s just way too good!

Whoever doesn’t like the solo here, we want to talk to you and personally ask you what the problem is. Lol. This is one hell of a song that’s seriously hard not to enjoy even if you’re not a huge fan of country music. Sadly, they don’t make it like this anymore.

Can anyone transport us back in time when this was all over the radio?

“No, it never has been fun (being Merle Haggard). I’ve had a lot of peaks and valleys. The high points are great, the low points are terrible… I don’t think people want to feel bad. There’s enough depression in the world without me adding to it.” – Merle Haggard

The live version is way better than the recording and that says a lot about Merle Haggard. Besides, there’s no way you can play this without cranking it up. It has to be loud – your neighbors will thank you.

With all his amazing guitar work, Danny Gatton remains underappreciated. The man can play any genre – he’s a master of his craft. He always loses when it’s a popularity contest but looking at this solo will make you think why he never got the credit he undeniably deserved.

There is no other guitarist who can play like him. No theatrics and nothing flashy – it was all him and his talent.

“Gatton was just amazing. When you met him, it was, ‘How can anybody play like that?’ It would just astound you. Gatton was the most mellow guy in the whole world. He’d make fun of it, because it was so natural for him to play like that.” – Saxophonist Roger McDuffie

He was appropriately nicknamed “The Humbler” you’ll understand why after watching this solo. He may not have achieved commercial success but he earned the respect of his peers such as Les Paul, Eric Clapton and Willie Nelson.

He’s keeping country music pure and this is what the genre is all about. This song just takes us back to our younger days and yeah, it’s the easiest way to time travel. Oh and let’s not forget that session musician Brent Mason’s guitar work here is simply outstanding.

That solo is too good for words – nothing could accurately describe how stellar it sounds.

“But hits aside, Don’t Rock the Jukebox is solid as a new traditionalist record, meaning that it’s a country record with ever-present pedal steel for every synth or glossy fiddle. Jackson’s voice is in the groove, down there with Jones and Haggard, tougher than Travis, leaner than Strait, and almost as hillbilly as Yoakam. This is a great record that stands the test of time.” – AllMusic’s Thom Jurek

Brent Mason has a series of online guitar lessons and well, he’s definitely the guy you want to learn from. His axeslinging skills are off-the-charts.