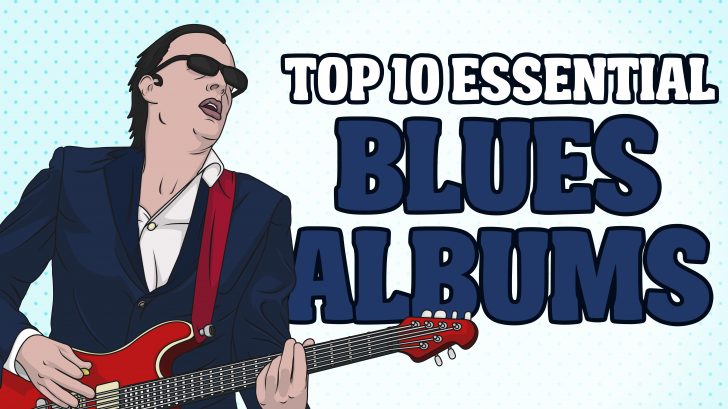 Gotta Have These Albums!

What can be said about these most definitive essential blues albums. It includes a blues God, Eric Clapton (of course); the Father, Charley Patton; the Son, Jeff Beck; the King, Robert Johnson; and the Holy Ghost, Stevie Ray Vaughan. (Despite having experienced Jimi Hendrix, still, we are wondering what galaxy he was from.) We devotedly devoured every note that we could get from these legends and without them, blues would have succumbed to total chaos.

In search of essential blues albums, I have come up with this list, and to be honest I don’t even know if I ranked it well because every album on this list are just total perfection. It’s hard to tell which one should top the list. Check them out and tell us what you think.

If we would conduct a guitar battle between Jeff Beck and Eric Clapton, Beck was/is arguably better than Clapton. “Truth” is one of the best and historical works of Jeff Beck with Rod Stewart on vocals. An album that considerably a blues-rock classic, no doubt about that. If you love blues that much, then this album should be added to your collection –  A MUST HEAR FOR ALL GOOD MUSIC LOVERS!

“Morning Dew,” “Greensleeves,” “Beck’s Bolero,” “I Ain’t Superstitious,” and “Shapes of Things” are the songs that defined of how superb the album is, rough and very dynamic blues-rock classic. – A “must have” blues album. Lots of history surrounds this album. “Truth” is the first legendary album by the group formed by Jeff Beck soon after leaving The Yardbirds.

One of the most epic and certainly of notable historical that has artistic value. This compilation of complete recordings of Charley Patton is a testimony of music before it had an audience. It represents the purest expression of an artist unbound by both musical backgrounds and to meet expectations.

Charley Patton is definitely the source point of Delta Country Blues. Delta Blues first great star! The compilation album has an unbelievable value. The 92 tracks here give a comprehensive account of how the original Delta Blues sounded like at the hands of its Master.  A re-mastered version of this has made it a very listenable set of albums for pleasure.

A great listen for anyone that loves the blues. This album is a live recording from London in 1970. Son House being in old age at that time, his voice, delivery, and rough guitar playing are just as strong as ever. Musician who backed him up on harmonica was Canned Heat’s, Alan Wilson.

Out of all the blues albums that were released by old delta bluesmen, this is one of the best.  Son House’s voice and guitar playing carry more weight than ever, and every material he has is some of his strongest, especially “Death Letter,” “Grinin’ In Your Face” and “John the Revelator.” This album is highly recommended, and you will see yourself re-listening it.

A live album recorded in July 1960 at the Newport Jazz festival in Rhode Island and later released in November of the same year. Everything about this performance is perfection. The rolling drums (Francis Clay), the bouncy piano )Otis Spann), the amazing harmonica (James Cotton) and of course Waters’ guitar and vocals are probably one of the best live performance ever witnessed.  Albums like this are the reason why we love blues music so much!

“I Got My Brand On You,” “Tiger In Your Hand,” “I Feel So Good,” and “Got My Mojo Working.” are just the songs on this album that will bring you screaming hysterics and will put you in awe! Cream of the crop blues album!

Incredibly awesome and groundbreaking! An album that had the real blues sound, and every bit of the guitar work on this album are brilliant that will make it all worthwhile listening. “Bluesbreakers With Eric Clapton” was the very album that “Slowhands” was known for as the guitar God.

On the other hand, John Mayall, a fabulous blues piano player, and harmonica player have launched some of the greatest Rock N’ Roll musicians that this world ever had. And not to mention the future Fleetwood Mac bassist John McVie. This album was the breakthrough moment for British blues. Some of the songs included in the album that gives off and shows some of their great skills are ” All your Love,” “Hideaway,” “Double Crossing Time,” and “It Ain’t Right.”  These were the most upbeat songs on here, and the rest of them are pretty good as well.

This album may be a while ago, but is definitely a splendid piece of work.

How would I define this awesome album you say? – Music in this album is solid all the way through every instrumentation is absolutely good, and even the backing music is great. So much diversity for a blues record that helps listeners to keep interest. A true classic.

Not only that it is both an enjoyable and interesting record, but also Albert King (ironically) is one of the kings of blues! “Laundromat Blues,” “Crosscut Saw,” and “Born Under A Bad Sign.” songs that would define King’s powerful guitar sting. And if you want to hear the most beautiful opening guitar lick from a guitar you should also listen to “The Very Thought of You.”

One of the world’s greatest bluesman. Every time this legend put on a show, it’s always a great experience. B.B.’s performances are always a maximized pleasure.

“Live at the Regal” was recorded on November 21, 1964, at the Chicago, Illinois, and it was the beginning of the greatest live albums in the world of blues. Songs that he played were “Memphis Slim’s Every Day I Have Blues,” “Sweet Little Angel,” and “Sweet Sixteen.” It showcases B.B.’s incredible guitar stylings, the way he could make a note sing and vibrate for ages. This live album was so historical that it made a testament to the power of the blues and of how genius B.B. King. You should definitely get your hands on a copy of this awesome album to somehow experience a classic night of live blues.

“The Complete Recordings” is a compilation album by the most important blues musician who ever lived. You will never find any bluesman who has deeply soulful in his music than Robert Johnson.

Legend says that he sold his soul to the Devil for him to gained his extraordinary skills on guitar, but I guess that’s not a reason to fret. Having the title of the King of the Delta Blues, this would not surprise you anymore. His complex, polyrhythmic style influenced every generation of guitarists that followed, and some of the greatest enduring Blues classics ever written was from this guy.

Songs that you need to hear on this compilation album are “Kind Hearted Woman,” “I Believe I’ll Dust My Broom,” “Sweet Home Chicago,” “Terraplane Blues,” “Cross Road Blues,” “If I Had Possession Over Judgment Day,” “I’m a Steady Rollin’ Man,” “Stop Breakin’ Down Blues,” and “Love in Vain.” You may realize that most people recommend songs only about 2 or 3 songs around, but this album is so good that you had to listen to most of its song and if not, all the songs.

SRV’s groundbreaking debut album that SVR’s that revived the blues in the ’80s. The reason SRV revived the blues may have been because he was a beast, extremely skilled guitarist. He’s not just your average blues artist his talent shines through in all of his songs. SRV, it is just solid all the way around.

The album is an absolute classic, to say the least. It will blow you away the first time hearing it and will continue to do so. In terms of composition and technique, this man is one of the all-time greats.

“Pride and Joy,” “Texas Flood,” “Testify,” and “Dirty Pool” are just some of the examples of songs that included on the album which are emotionally driven, passionately written, powerful emotion, and that defines the sound of the bands for years to come. All are greats, and the rest considerably one of the best.

Joe Bonamassa is one of those great artists that not many people in the mainstream talk about, still, he’s rather successful and commercially huge.

“Dustbowl” is one of his most eclectic and experimental efforts. You would certainly incline to agree after hearing the different styles that stand out on here. A sublime example of modern Blues-Rock, as heard on ‘Black Lung Heartache,’ ‘Slow Train,’ and the title track. – Joe Bonamassa’s “Dust Bowl” is Blues-Rock Like It Should Be!

If you haven’t heard it yet, you need to check it out immediately. You might be missing out! What a great album.