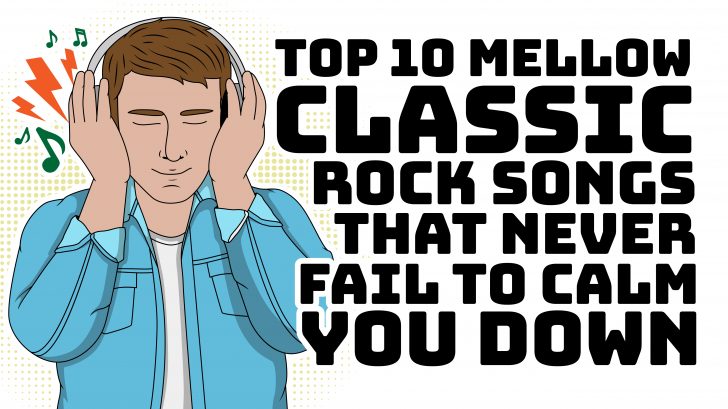 Keep Calm and Play On

We all have that go-to song that we play when we’re upset or pretty much any time emotions are high. Maybe it’s the tune or the lyrics or the melody or most likely, it’s the whole package. They make you feel like you’re floating on air and everything is okay again.

Music does that to you, you know. It’s supposed to make you feel things and for some reason, it can be effective in calming you down when it’s all too much. So sit back, crack open a cold one or grab a tub of Ben & Jerry’s and enjoy.

P.S. These songs go so well with any kind of playlist. Yep, you’re welcome.

Even if you find this a bit cheesy, today’s music still won’t hold a candle to it. It’s an absolute classic and that first line alone is enough to send you into a state of incredible calm. Besides, it should be considered a crime if you don’t sing along.

Also, it’s perhaps one of the most effective means of transporting you back to the ‘70s. Man, where did time go?

“When we put the band together we basically were talking about a rock n’ roll band with this horn section and we said, “What are we going to do with that horn section that makes it a main character in a song?” And that really is a big part of our signature.” – Chicago’s Jimmy Pankow

It’s the kind of song you play after a crazy, chaotic week when you just want to chill and calm you soul. And it’s also soothing enough to put on repeat during long drives.

It doesn’t matter if the title and lyrics don’t make sense – check out the lines “I’ve been through the desert on a horse with no name / It felt good to be out of the rain…” You know, he could have just named the poor horse William for all he cares. And why would there be rain in the desert?

So anyway, we’re not here to analyze the meaning of the song obviously but well, this is so calming even hot-tempered Walter White approves.

“Everybody had a song called I Need You in mind as the single. It was initially felt that A Horse With No Name was good but perhaps a little too quirky. At first it felt like a bit of a novelty song. It was a shock that it became so popular.” – Guitarist Dewey Bunnell

Say what you want about it, but it’s a gem. Nothing will affect you the way this song does and that’s the simple truth.

What’s better than a mellow classic rock song with Steve Perry hitting those high notes effortlessly? Most people have this as their wedding song and we totally understand why. They probably play it to soothe each other when arguments heat up, lol.

But to be fair to Journey, they have several songs that speak to your soul and this is just one of them. It’s as if Steve Perry himself was patting you in the back urging you to calm down.

“I had to keep my head down on the console when “Open Arms” was on. There is one line in the song that I always wanted to be a certain way. I have ideals about certain things. The line “wanting you near” — I just wanted that line to go up and soar. I wanted it to be heartfelt. Every time it would come by I would just have to keep my head down and try to swallow the lump in my throat. I felt so proud of the song.” – Steve Perry

Perry had every reason to be proud. Not everyone in the band was excited because it wasn’t something they normally play but lo and behold, it became an epic masterpiece.

7. Creedence Clearwater Revival – “Have You Ever Seen The Rain?”

Admit it, this makes you want to blast the speakers, close your eyes, and forget all your worries. It’s a huge plus if it’s actually raining too. You cannot be angry or upset when this song comes on. It’s as if it was written to specifically calm down people who are emotionally unstable just like us, ha.

It has everything you want and more – even with the feel-good vibes, it has so much heart and soul into it.

“This song was originally written about a very sad thing that was going on in my life. But I refuse to be sad now. Because now this song reminds me of my little girl, Kelsy, and every time I sing it, I think about Kelsy and rainbows.” – John Fogerty

This is perhaps CCR’s finest musical moment. It’s not every day all the members come together to create something as magical as this.

It’s one of the most nostalgic songs ever. It’s as if you go back to your childhood or teenage days when this comes on. And maybe, therein lies the secret you know. It calms you down because it transports you to those times when you were young and carefree.

Christopher Cross has also given us some of the most relaxing songs of all time – “Think of Laura,” “Arthur’s Theme” and of course, “Sailing.”

“I was just at home sitting in this cheap apartment, sitting at the table. I remember coming up with the verse and chorus, and the lyrics to the first verse of the chorus all came out. These tunings, like Joni used to say, they get you in this sort of trance, so all that came out at once: ‘It’s not far down to paradise…’ The chorus just sort of came out.” – Christopher Cross

If listening to this song doesn’t relax you, you have some serious issues there, buddy.

This epic track is equal parts seductive and relaxing. And it’s so full of emotion which isn’t surprising given that Eric Clapton wrote this for Patti Boyd who basically stole his heart from the moment he set eyes on her.

You have to give it to Boyd because she inspired not one but two legendary musicians to write these classic pieces for her.

“For years it tore at me. To have inspired Eric, and George before him, to write such music was so flattering. ‘Wonderful Tonight’ was the most poignant reminder of all that was good in our relationship, and when things went wrong it was torture to hear it.” – Patti Boyd

Whether you’re single or not, going on a date or all by yourself, it’s the perfect calm-me-down track to just shut off the world. The only ‘bad’ thing about this is that it’s now being overplayed in proms and weddings. Then again, that’s what this is for.

Some people think this is the worst song from the ‘70s and we don’t know what’s wrong with them. Although we would personally like to talk to them to ask if they have any issues. Lol. It’s not the greatest mellow rock song there is, but listening to it is almost like when that first shot of caffeine (or more appropriately, Pina Colada) hits your soul – it awakens you but it also eases any negative emotion inside of you.

How is that even possible?

Well it may or may not make you crave for a Piña Colada or something similar. Either way, no one gets angry with this song in the background.

Jim Croce was a genius and an excellent storyteller at that. His songs stood the test of time and are still being used today in movies and TV shows. It gives you goosebumps and if your emotions are high, you might want to consider plugging this in.

If you’re still upset after listening to this then well, you need to listen again and again.

“Jim was prolific beyond prolific. There was never a time when we weren’t doing music – 12 hours a day, minimum. But I think that Jim was really getting into writing, and he wanted to do movies.” – Ingrid Croce

You know, you can be made of stone but this song will still get to you. It has that magic, that charm that we find difficult to explain. It’s like when it plays, you have no choice but to stay silent and wonder how Jim managed to write such a brilliant piece of music.

If all else fails, let Stevie Nicks calm you down. You’d have to be made of stone to not feel enchanted by her voice. To be fair to Fleetwood Mac, you don’t exactly need any valid reason to plug this in and put the volume on max.
It’s a real classic and definitely one of the band’s finest musical moments.

“I remember the night I wrote ‘Dreams.’ I walked in and handed a cassette of the song to Lindsey. It was a rough take, just me singing solo and playing piano. Even though he was mad with me at the time, Lindsey played it and then looked up at me and smiled.” – Stevie Nicks

It’s breathtaking and deep. You don’t have to be in Stevie’s shoes to know what she’s feeling. It’s hauntingly beautiful to say the least and there may be numerous covers out there but nothing beats the original.

Oh, nothing’s working? So why don’t we go ahead and ask for help from The Fab Four? With so many mellow songs in their catalog, you’ll be back to feeling good in no time. But we chose “Yesterday” because it doesn’t just have an interesting backstory (it was initially called “Scrambled Eggs”) but it just calms your nerves quickly.

This is what we like about The Beatles – they can go from “Yesterday” to “Helter Skelter” real quick.

“Paul said he wanted a one-word title and was considering Yesterday, except that he thought it was perhaps too corny. I persuaded him that it was all right.” – George Martin

From the melody to the lyrics (“Yesterday, all my troubles seemed so far away…”), it’s one of Paul McCartney’s greatest works. It somehow makes you forget all the stress and any negativity around you. It never fails to make us feel better every single time.