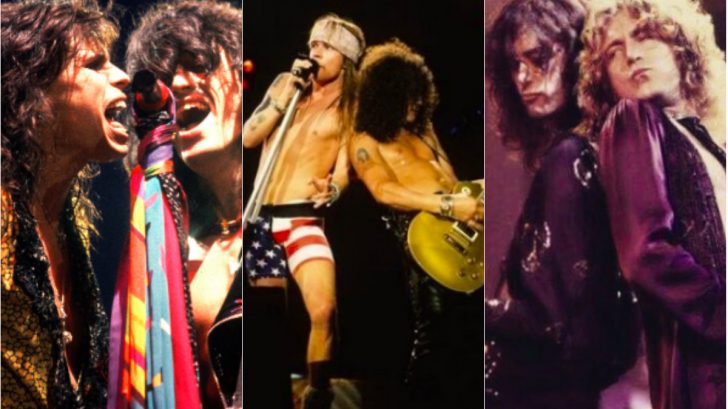 The most legendary of rock bands have one thing in common: they have those 1-2 punches band members. The frontman and the lead guitarist that really bring the band to life. They are electric to watch and they are loved by hordes of fans. These vocal-guitarist duos make the band iconic. And here are the top 10 Most most epic duos in the history of rock n’ roll:

10. Morrissey and Johnny Marr – The Smiths

These two musicians from Manchester have that special element about them. Their brand of rock n’ roll is that of the indie variety and they make it work really well. There’s never been anyone quite like Morrissey with his stage presence, the way he performs, and his songwriting talent. Johnny Marr’s performance style is also very distinct, but together they’re an entire experience. Especially their songwriting collaboration which definitely changed what is known to be alternative rock music.

9. Roger Daltrey and Pete Townshend – The Who

There’s no denying that the chemistry between Daltrey and Townshend transcends beyond talent and stage presence, these two have achieved the status of being rock gods. Roger Daltrey was the one who set the bar high of being a rock frontman who actually plays the part. His stage presence, his powerful vocals, and the way he commands the audiences were even more augmented with the thrilling talent of guitarist Pete Townshend. This iconic rock duo ushered The Who into becoming one of the biggest rockbands in the 1970’s. Their songwriting partnership also paved the way to composing full-blown concept albums that other rock bands followed suit too.

8. Freddy Mercury and Brian May – Queen

Music legend and Queen frontman Freddie Mercury was a trailblazer in pop-rock music. His voice was only his own and was iconic in itself. Together with his band Queen, Mercury revitalized the music scene back then and up to this day. Mercury’s voice is riveting and is even made more electrifying by the stylistic guitar playing of Queen’s guitarist Brian May. Though they may have had some disagreements on songwriting, it’s fair to say the unlike many rock band members of their era, Queen loved and respected each other. Mercury and May both had respect and admiration for each other’s musical ability and that definitely translated on the stage.

These two names define the Irish rock band U2. Their success and longevity is due in part to the chemistry between frontman Bono and guitarist The Edge. The guitarist, whose real name is David Evans, believes that their personalities actually compliment each other. The Edge reveals in an interview,

“The chemistry of the personalities is a big factor. Bono is chairman and founding member of OverAchievers Anonymous. He has an irrepressible drive to be great. He wants to achieve it all, which actually makes him very vulnerable. I am driven in different ways. I might have to take the 12 steps to Workaholics Anonymous. I have a curiosity that compels me to find ways to make music that are fresh and new.”

Beyond the chemistry of their personalities, their chemistry on stage is also undeniable.

Not to dismiss the outstanding talent of the late Bon Scott who was the original front man of AC/DC, his replacement Brian Johnson is talented in his own right and certainly meshed well together with guitarist Angus Young. His dynamic vocals is just perfectly complimented by the sound and style of Angus Young.  Together, they make music that transcends the rock n’ roll genre. They are the rock tag team band members aspire to be.

David Lee Roth’s vocal prowess combined with Eddie Van Halen’s pure mastery of skill on the guitar is what made Van Halen tick. Every time these two hit the stage, they were bound to wreak havoc in a musically-mind-blowing kind of way. Nothing compares to Roth’s and Van Halen’s command of the stage and the audience as they truly make watching their show a life-altering experience. Nothing compared to the showmanship of David Lee Roth which was perfectly complemented by Eddie Van Halen’s guitar god status.

No other rock star combo will ever be as crazy (and sexy-cool) as Aerosmith’s Steven Tyler and Joe Perry. They are crazy alright with their rockstar lives mostly spent snorting drugs and drinking booze, but they both have a rare charisma that definitely speaks to audiences worldwide. Steven Tyler’s iconic vocals reach heights only others could dream of (and dream on, they shall). Joe Perry’s natural groove on the guitar while doing face-melting solos is just jaw-dropping at the least. These two flamboyant rock gods definitely is a 1-2 punch for the books.

The truth is, without Slash and Axl Rose, there is no Guns N’ Roses. They are household names of rock n’ roll not just with their electrifying musical talent but with their notorious reckless behavior. Despite their reputation as the bad boys in rock, they have made their music, and their partnership, as legendary as the stories about them. Axl Rose is a great performer and a brilliant vocalist and Slash plays riffs so powerfully and effortlessly like the guitar god that he is. At the end of the day, it’s always Axl and Slash forever.

What can we say about Mick Jagger and Keith Richards other than they are true living rock legends that have endured the test of time and remains relevant 50+ years on. Jagger and Richards define what The Rolling Stones are all about – cool, talented, and mind-blowing. These two command their stage (and their career) their way and do not apologize about it. All they do is pure rock n’ roll together and the world loves them for that.

Robert Plant and Jimmy Page are the complete rock n’ roll package. They are talented, they are inspirational, they are rock gods in their own right and together, they have transformed rock n’ roll. Led Zeppelin would be nothing without them because they ARE Led Zeppelin. With Plant’s captivating powerful vocals combined with Page’s phenomenal guitar skills, they have accomplished success and have left a legacy that has left the world wanting for more (even though they have denied fans of an actual reunion for decades and decades).

Either way, Plant and Page are the rock n’ roll duo that packs the most out of a punch.