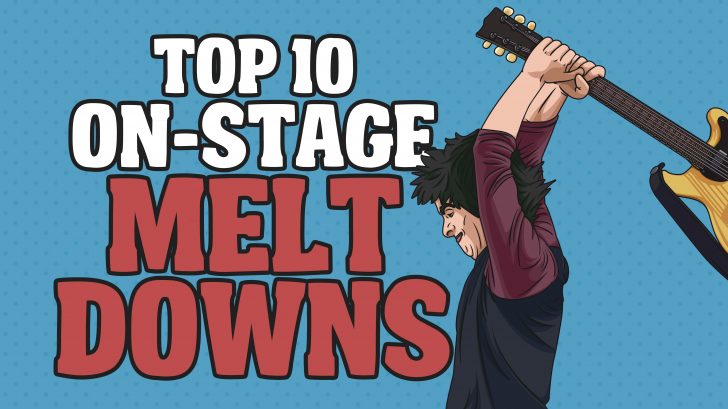 “Professionalism” in the rock world is not really very clearly defined especially with rockstars with addiction problems, big egos, and unstable emotional states. Many times, these rockstars’ unpredictable moods and emotions take over and then their “professionalism” is out the window, resulting to rage-filled meltdowns on stage. Sometimes, these rockstar meltdowns are warranted, with some fans crossing the line and pissing off the performer, so it is possible that the fault is also the overzealous fans’. Either way, onstage meltdowns make for good entertainment. Check out the best (or worst, behaviour-wise) below:

During a Foo Fighters iTunes Festival gig at the Roundhouse in Camden, the usually cool-headed, nicest-dude-in-rock-music Dave Grohl lost his cool for the best reason: to break up a fight happening in the mosh pit. While singing the song Walk, the Grohl noticed a man acting violently in the among the crowd.  Grohl then stopped the band from playing to stop the fighting and tell off the fan causing the ruckus, saying,

“Who’s that there? Let me see him. Who’s fighting? Let me see him. Hey you in the striped shirt, look at me, look at me… Get the f-ck outta my show right now!” When the man was removed from the area, Grohl then added, “You don’t come to my show to fight, you come to my show to f-cking dance, you a**hole”, much to the audience’s praise! Dave Grohl had a meltdown to stop a showdown, and that’s the kindest meltdown you will ever see on stage.

At the peak of Nirvana’s fame, it’s now well-known that front man Kurt Cobain was having trouble coping with fame and with substance abuse. It was all apparent and put on display just how messed up Cobain was during Nirvana’s performance in São Paulo in January 1993. Just over thirty minutes into the performance, Cobain suddenly gives up on playing and unexpectedly goes on strike, storming off the stage, ignoring his clueless bandmates, Novoselic and Grohl, and proceeding to crush a watermelon into his guitar strings. During a cover performance of the Queen classic hit “We Will Rock You”, Cobain sang “we will f*** you” in place of the original words.

If you want to rile up Courtney Love, just bring a framed picture of his late husband Nirvana frontman Kurt Cobain at her own gig. Love basically went off the rails in the public eye, and dealing with the conspiracy that she was the one who killed the beloved grunge rock icon since Cobain’s untimely suicide didn’t really help her case. One of her greatest meltdowns actually happened on stage while she was on a tour with her band Hole in Brazil. At the show, one fan was holding up a picture of Kurt Cobain in the audience, an act that triggered a tirade from Love. She spots the fan and calls her a “fat goth”, and stopped the show midway through the set, declaring the show was over, to which the crowd reacted violently.

She goes on to rant,  “I’m not Kurt. I have to live with his sh-t, his ghost, his kid every day. Throwing that up is stupid and rude and I’ll beat the f-ck out of you if you do it again”, then proceeds to walk out the stage.

Aside from making some of the greatest hits in alternative rock, Oasis has been also known for the endless feud between band members brothers Liam and Noel Gallagher. Sibling rivalry is a natural thing, especially when you’re in a band, tensions and cat fights are bound to happen. The Gallagher brothers, however, have taken sibling rivalry to another level, even making them recognizably controversial figures in the music industry. The longstanding beef between the brothers is entertaining for sure. The brothers also don’t shy away from giving each other a hard time mid-performance even while on stage. In this performance of “Whatever”, the brothers stopped mid-song because of a disagreement about the arrangement of the song. As Liam started singing, Noel shook his head at Liam on the other side of the stage letting him know he wasn’t pleased with his brother’s take on their performance. This angered Liam and proceeded to tell his brother to sing the song himself. Noel even described his brother as “rude, arrogant, intimidating and lazy. He’s the angriest man you’ll ever meet. He’s like a man with a fork in a world of soup.” This feud ultimately led to the demise of Oasis.

During a show in Nashville, John Mayer went on a lengthy tearful apology rant on stage, acknowledging his mistakes for the controversial racial comments he made in an interview he gave Playboy magazine. In the interview, he used a black racial slur, going on about the reason why he cannot have a relationship with black women is because while his d-ck is a “white supremacist”. As expected, the backlash from those statements have been very bad. Mayer, decided to take matters into his own hands and undo his wrongdoings by breaking things down in a seven and a half minute apology mid-concert, repeatedly apologizing for his controversial comments but mansplaining it along the way.

Somehow, his apology only seemed to make matters worse.

Green Day frontman Billie Joe Armstrong has had many meltdowns in his long career. It seems like he has a short fuse. Punk is his work and as evidenced by his on-stage tantrum at the 2012 iHeart Radio festival, punk is also his attitude and behavior. Billie Joe stopped singing mid-set when he saw on the monitors that Green Day only had one minute left to play. This led to Armstrong using up his last minute to go on a profane tirade about the time limit, bragging about how he’s been “around since 1988” and that he is not Justin Bieber. He then smashed his guitar and stormed off the stage. The lead singer checked into rehab the same week.

It’s also not the first time Armstrong had an on-stage anger-fueled rant. In 2006, Armstrong ended his band’s performance by shouting into the audience:

“Hey, why don’t you come here you little mohawked motherf—ker? You wanna fight? I’ll fight you right now. C’mon, get up here on the stage.”

8. Billy Corgan Threatens To Punch Fan Who Jumped On Stage

During a 2016 show in Memphis, Tenessee, an overeager fan jumped on stage while Billy Corgan was playing a cover of “Angie” by the Rolling Stones.

Billy Corgan, of course, wasn’t too pleased by the unexpected interruption. He told the fan, “Get the f-ck off my stage before I punch you in the f-cking face.” When the fan left the stage, Corgan did the ‘rock on’ hand gesture before resuming the show

Paul Stanley has a troll, a guy who just screws with him from the audience by pointing a laser pointer at the band while they are playing on stage. During a 1999 KISS gig, this laser-pointer guy pissed off Stanley for the first time when he stupidly pointed his light at the rock star which merited him a nickname from Stanley, calling the fan a schmuck several times and as a result, delayed the beginning of “Detroit Rock City.” The annoying fan has been called the ‘Laser Pointer Schmuck’ ever since. Stanley was very irritated he just threatened out on the mic,  “Put it in your pocket or I’ll put it in your ass”.

THE rock star who is notorious for bad behavior has got to be Guns N’ Roses’ very own Axl Rose. His reputation has been built around his knack to spark controversy, especially on stage, or off-stage perhaps, when he once literally jumped off stage to attack a fan and sparked a real rioted. It was a show in St. Louis and a fan in the mosh pit was taking pictures during the concert when it was already announced that cameras weren’t allowed. Rose was somehow very infuriated by the fan who was breaking the rules (maybe he was taking notes from Axl himself), and proceeded to tackle the fan as he leaped off the stage into the crowd to take matters in his own hands.

The tantrum eventually incited a riot now known as The Riverport Riot or the “Rocket Queen Riot” leading to fans destroying Guns N’ Roses’ equipment. Dozens were injured and Rose was arrested and charged with having incited said riot.