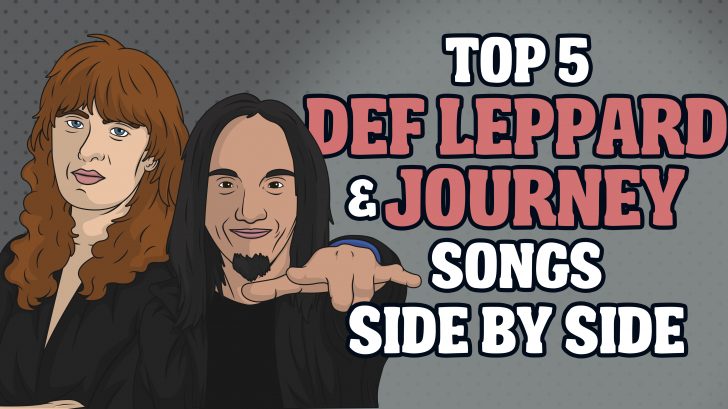 One Does Not Simply Have A Great Weekend Without Some Journey And Def Leppard!

Both legends will be doing a massive 50-city tour that will undertake on May 21 in Halford, Connecticut’s XL Center,  and will wind up ending on October 6 at the Forum in Los Angeles. – Old School Touring Style! Two of the greatest of all time joining forces together is definitely going to be foookkkiiinng epic! You got to hand it to them, both bands are still relevant. So for all the haters, all I can say is “Fooooock Off” and let those who still dig these bands enjoy it.

It’s not 1983 but still, this can get you very excited. All that being seeing, we look back on the Top 5 Def Leppard and Journey Songs Side to Side. Comment down below if you agree with this list.

The song that finally put Journey on their way to rock stardom. This kicks butt! “Wheel in the Sky” was already written by Robert Fleischman when Steve Perry joined the band.

“What Roy gave us was the opportunity to try different textures and ideas,” Perry recalls, “but the foundational aspect of the songs and the arrangements were done. Roy really gave us a direction, and from there the band found itself.”

This song should be turned up in full volume every time you tend to play it! A great journey (literally) song from a great ass-kicking band. This is perfect for driving or wherever you may roam. There’s an absolute definite road aspect to this tune. This song became easily everyone’s favorite.

“Gunter Glieben Glauten Globen.” – It doesn’t mean anything. But admit it, this is the most epic thing you’ve ever heard from a song’s intro! This song’s meaning is that Def Leppard are gonna keep “rocking for ages.” The song that will get you into them, the absolute masterpiece! Probably the biggest hit in the album.

“We’d have never written ‘Rock Of Ages’ if we hadn’t have heard ‘I Love Rock And Roll’ by Joan Jett. But we didn’t steal her entire sound. We took that one song and thought, ‘This is very anthemic. We could get away with writing songs of this standard and style.’ And that’s what we did. It doesn’t particularly sound that much like her, the chorus a bit. The actual structure of the song is nothing alike.” -Joe Elliott

A true rock anthem, rock n’ roll and getting stoned! Though the lyrics get repetitive, they are quite catchy, and everything else makes up for it, not to mention the drums. And as usual, some great guitar playing and vocals from Joe is the Cream of the crop.

A song that was actually inspired by Thin Lizzy, with whom Journey had toured a couple of years before recording the Departure album. The sound, the lyrics, everything about this song is great. And whoever says that Journey is bad shall taste the wrath of Perry onto themselves. You don’t just mess around with Journey, and especially with Steve Perry. He once single-handedly killed 4 ninjas while belting a song at the same time.

“In the studio, Rolie tried a mellotron on the number and the instrument proved defective. Co-producer Geoff Workman managed to correct the sound somewhat and, once doubled with Rolie’s regular organ, the combination created a unique sound which, coupled with the stacked background vocals, gave the song a kind of celestial ring.”

Super nasty song from a great band and having Arnel Pineda taking Steve Perry’s spot isn’t the same anymore, but you can’t deny the fact that he does a great job. Hands down, he did the job any way he wanted it!

A track on DL’s second album High ‘n’ Dry, and was awesomely written by their guitarist Steve Clark and Pete Willis along with the lead singer Joe Eliott. A rock ballad with heartfelt sadness theme. And the way it blends into the next song, “Switch 625,”  on the album, “High N Dry,” totally kicks ass!

“We were doing it over and over again and it was the same old, same old, so we thought it would be great if we started it acoustic and then went into Steve Clark’s solo. It was halfway and he’d pick up his twin neck and off he goes. Around that time Tesla was on tour with us and every time we did that acoustic thing it was a break in the set, and before you knew it, every other band was doing an acoustic set within their set: The Scorpions, Bon Jovi, all the stuff from the ’80s, and Tesla who was on tour with us.” -Phil Collen

Strong melody, uncanny harmonies, and just pure awesomeness! The way Def Leppard sounded in this particular song is wonderful. Hard rock and blues, a mix of both. The dramatic pause followed by the singer yelling “No! No! Noohuwoah!!!” before the guitar solo. -Completely sold!

Easily one of Journey’s phenomenal song, and if you can’t relate to what the song is all about, maybe someday you will. We might all agree that the Frontiers album overall was bad, but Separate Ways (Worlds Apart) did stand out as an epic track!

“There’s got to be a more soulful way of looking at this,” -Perry

“I think he mumbled his way through half the lyrics, but the audience just came unglued.” -Cain

Pure emotion and the sound is great! You can totally feel what the band members are going through with their lives. If this song doesn’t move you, I don’t know what will. Passion is hard to come by, but passion mixed with true love is one of the most powerful and destructive things on this planet of ours. This song says it all.

Hysteria is the title track of Def Leppard’s biggest album from 1987. Everything about it so amazingly incredible. From the beat, the singers’ powerful vocals, to the well-written lyrics. I mean, come on, how many artists could actually come up and write something like this?

“We were in Dublin and Rick Savage started playing this tune, so I immediately started singing, ‘Out of touch, out of reach.’ That was literally the first thing that came out of my mouth. He said that was cool and he goes, [singing] ‘I got to know tonight,’ this whole other section. We glued it together and we got very excited and we actually went around and played it for our friends who were clothes designers in Dublin. We sat down and were playing acoustic guitar, singing over the demo, and we thought that was going to be the chorus. And [producer] Mutt Lange said, ‘Okay, that’s a great verse, a great bridge. Now we need the chorus.’ Uh, okay. [Laughs] So we sat down and we kind of just goofed around. Steve [Clark] had this idea and Joe came and sang this thing and before you knew it, the song was pretty much done.” – Rick Savage

First time hearing it, you’ll just instantly fall in love with it. Though it doesn’t get that much of attention being overshadowed by some of the other singles off of the album. But still, this is a CLASSIC DL with lyrical genius-ness! There’s no other way to describe it. – Whoo!

The most romantic song that the Journey has ever written.  It explained the problems of trying to maintain a life with a relationship while they were touring. You may find the lyrics cliche though “They say that the road ain’t no place to start a family” and “Circus life under the big top world.”

“God gave me that song, I started it on the bus heading to Saratoga Springs. I woke up the next day with a napkin on the side of my nightstand and I looked at the lyrics, ‘Highway run into the midnight sun.’ Then I got this supernatural download: This is the rest of the song. I wrote rest of it down, almost frantically. I’d never had a song come to me so quickly that it was anointed, supernatural. Literally, in 30 minutes I had written that song. I had the napkin in my pocket and I put it on the piano. I had a big grand piano there by the orchestra. I played through it and I thought, ‘Man, this is good. The Lord gave me permission to finish it. Normally I would go to Steve Perry or somebody and say, ‘Help me finish this song.’ No. God gave me the mind to finish it, and the rest is history. That would be a love song to God, absolutely.” -Cain

But this Journey track indicates a prime example of how true love should be, and it pretty much tells its own story. It brings us back as a bunch of high schoolers.  An absolute classic power ballad in the best Journey way!

There’s no doubt that this is one of Lepp’s most famous songs of all time. It features a lot of instruments. The guitar works in this track kind of set the mood of the song. Joe’s vocals are pretty cool also. Rick’s drumming is amazing! Think about it with only one arm he was able to do that kind of drum fill!

“I used to work on the treadmill making knives and forks; it don’t cross over into a lyric. There’s nothing in Sheffield (England) to write songs about – you can’t write, ‘This is Steel City!’ and mean it. It’s come across like bloody heavy metal Hovis ad! It’s a great place with great people, but in my upbringing there was a lack of community spirit. I’m an only child; I found my own entertainment. The whole idea of being in a band is to escape boredom, so you create escapism.”

We have loved this song since the first we heard it way back in the late ’80s. One of the reasons why we can’t forget that time. Enjoying a song that we loved from way back then.

Every single human being on this planet definitely knows this song! One of the most exposed and overplayed tracks over the past two decades or so. Journey’s best-selling catalog track of the digital music era!

“At the band’s Oakland warehouse, this song bubbled out of a rehearsal. Schon developed the bass riff, the chugging guitar line and the sweeping chords on the chorus. Steve Smith built the song around a pattern featuring a lot of tom-toms, anchoring the number to a rich drum figure. Perry and Cain drew from their experiences with the Sunset Strip street scene for the lyrics, ‘streetlight people.'”

And, because it’s so well-known, it’s very easy to put this in the top spot. “Don’t Stop Believin'” is just one of the examples of how musical genius Journey are. This song is on a totally different level of awesomeness.  We all have loved this song for years. And every time we hear it, it helps us to get back on our feet. It has a great message that we can all relate to, – You Can Never Stop Believing.

The classic intro guitar riff and the bridge leading to the decent chorus will just immediately catch your attention. “Photograph” was their first biggest hit off the album “Pyromania” in 1983. Later in the song, there’s a great classic guitar solo, though it may be short, it’ll give you an eargasm without a doubt.

“The original band guitarist was fired after trying to work the right solo for the song. He spent weeks working on it, and it sounded horrible. His replacement had the solo down in a half an hour.” -Steve

Some of the best lyrics are on this song that makes it a total classic. And Joe’s singing is superb! This fine piece of work was stuck in our heads for days the first time we heard it, so meaningful. – We all have included this one on the soundtrack of our lives.