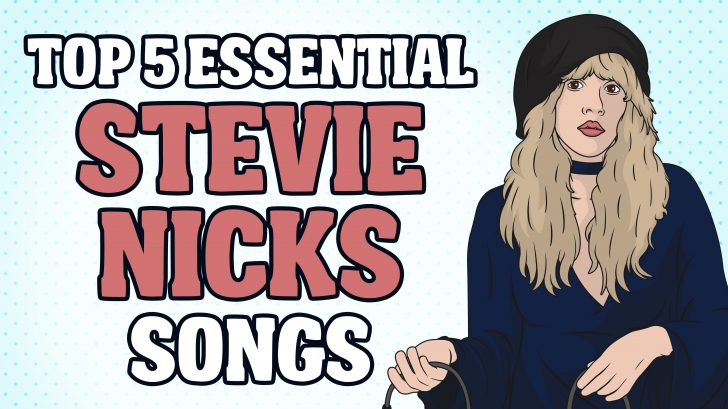 Stevie Nicks is a Rock N’ Roll goddess who has influenced a generation of female artists with her music, and the will to survive in the music scene. She is well-known for her mystical image and not only a successful solo artist but also as one of the key member of Fleetwood Mac.

The title “Queen of Rock and Roll” has been bestowed upon her.

For the past decades, we have all seen the ups and downs of Stevie Nicks, but she still managed to overcome every struggle, she was able to emerge and thrive all throughout. And now more than ever, Stevie Nicks is more respected and beloved by many.

Honoring her, we’ve ranked the Top 5 Essential Stevie Nicks Songs – both solo and with Fleetwood Mac. Check them out, and if you don’t agree with the list, comment down below and let us know.

If you’re looking for a good track from Stevie Nicks list of songs “Dreams” is the right choice. You can also find it quite amazing that not only this song is excellent, but everything on the album.

“I remember the night I wrote ‘Dreams.’ I walked in and handed a cassette of the song to Lindsey. It was a rough take, just me singing solo and playing piano. Even though he was mad with me at the time, Lindsey played it and then looked up at me and smiled. What was going on between us was sad. We were couples who couldn’t make it through. But, as musicians, we still respected each other – and we got some brilliant songs out of it.” – Stevie Nicks

“Dreams” is definitely one of the greatest songs that Stevie Nicks has ever written. You know that it is a masterpiece when it’s timeless and just about perfect.  It also has the absolute drumming and bass work. The way the rhythm section interacts with the keyboard will get on your nerves.

At the time when Lindsey Buckingham and Stevie Nicks were still going on with their relationship, they managed to write this song. Recording as Buckingham-Nicks, but when they were about to release the track on their second album, they joined Fleetwood Mac and recorded it with them.

According to myth, Rhiannon is the name of a Welsh goddess, a goddess of fertility and the mood, shuns a god and marries a mortal man. That god then frames her for the murder of her own son and was forced to stand at the entrance to a city and tell everyone entering that she killed her child. Though Nicks  never knew the story behind the goddess Rhiannon, not until after she wrote the song.

“It wasn’t until 1978 that I found out about (Welsh medieval prose tales) Mabinogion and that Branwen and Rhiannon are in there too, and that Rhiannon wasn’t a witch at all; she was a mythological queen. But my story was definitely written about a celestial being, I didn’t know who Rhiannon was, exactly, but I knew she was not of this world.”

Of all the music ever written by  Stevie Nicks, Rhiannon is by far the most qualifying reason why Stevie was called the “Queen of Rock N’ Roll.” Also, a lot of parents have named their daughters after the song title. You will be amazed at how many Rhiannon there are named after the song.

A beautiful song that portrays a beautiful, independent woman. Stevie, an enchanting personality, she wrote this piece what it is.

When Stevie Nick sets to pursue a solo career, Bella Donna was her impressive start. It left no doubt that she could pull something quite well without the help of her colleagues in Fleetwood Mac.

The song “Bella Donna” is one of the main attractors for this album, having a roots sound and great instrumentation. Nicks used her wide connections in music to make sure that this song will become a masterpiece.

“’Bella Donna’ is a term of endearment I use and the title is about making a lot of decisions in my life, making a change based on the turmoil in my soul. You get to a certain age where you want to slow down, be quieter. The title song was basically a warning to myself and a question to others. I’m thirty-three years old, and my life has been very up and down in the last six years”

A song about a father-daughter relationship. Stevie Nicks wrote it in just about five minutes on the guitar while she was spending some time in Aspen, Colorado. Surrounded by mountains, she was awed.

“My dad did have something to do with it, but he absolutely thinks that he was the whole complete reason it was ever written. I guess it was about September 1974, I was home at my dad and Mom’s house in Phoenix, and my father said, ‘You know, you really put a lot of time into this [her singing career], maybe you should give this six more months, and if you want to go back to school, we’ll pay for it. Basically you can do whatever you want and we’ll pay for it – I have wonderful parents, and I went, ‘cool, I can do that.’ Lindsey and I went up to Aspen, and we went to somebody’s incredible house, and they had a piano, and I had my guitar with me, and I went into their living room, looking out over the incredible Aspen skyway, and I wrote ‘Landslide.’ Three months later, Mick Fleetwood called. On New Year’s Eve, 1974, called and asked us to join Fleetwood Mac. So it was three months, I still had three more months to go to beat my six month goal that my dad gave me.”

One of her most enduring works with Fleetwood Mac. It garnered consistent airplay across a range of formats.

When the band regrouped for The Dance tour in 1997, Stevie Nicks and Lindsey Buckingham were both left alone on stage to perform the song, often getting teary-eyed toward the end. The emotional performances were repeated on subsequent tours. Fans were are amazed to see the ex-lovers sharing a poignant moment.  Nicks insisted that those were real emotions on display.

“You can go onstage and have a bit of a love affair, and when you go back to your separate dressing rooms, it’s over. But while you’re on the stage, it’s real.”

This song is a very memorable masterpiece which was written by the rock goddess.

A song written by Stevie Nicks about the death of John Lennon. The line about the “Words from a poet and a voice from a choir” refer to Lennon.

“I was in Australia when John Lennon was shot. Everybody was devastated. I didn’t know John Lennon, but I knew Jimmy Iovine, who worked with John quite a bit in the ’70s, and heard all the loving stories that Jimmy told about him. When I came back to Phoenix I started to write this song. Right when I got to Phoenix, my uncle Bill got cancer, got very sick very fast, and died in a couple of weeks. My cousin John Nicks and I were in the room when he died. There was just John and I there. That was part of the song when I went running down the hallways looking for somebody – I thought where’s my mom? Where’s his wife and the rest of the family? At that point I went back to the piano and finished the song.”

She came up with the title of the song when she asked Jane, Tom Petty’s wife when the couple met. Jane said,  “At the age of seventeen, but she had a very strong southern accent and Stevie thought she said “the edge of seventeen.” It made a perfect title for the song.

One of the greatest rock song of the ’80s, a third single from the album “Bella Donna.” A song that defines Stevie and the magic she puts on her music. The guitar on this song is great, the little cymbal tapping that goes on throughout the song is awesome, and Stevie’s overall singing is simply amazing.