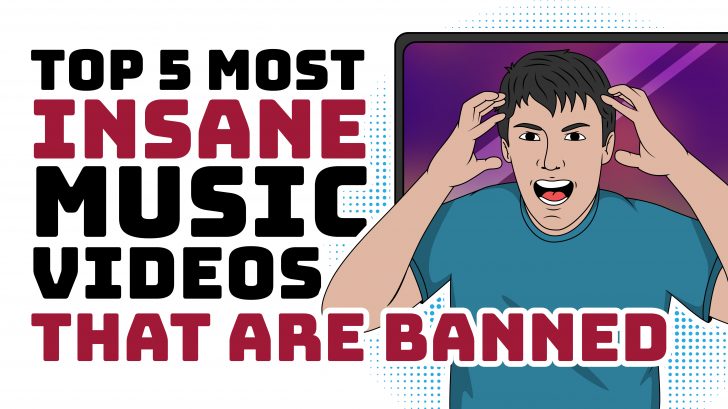 Once upon a time, MTV showed more music videos than reality shows. And while we scoffed at some of their reasons for banning MVs, like those they didn’t show because of product placements, we totally agree with their decision for the following.

You see, MTV is accessible to everyone including kids and these kinds of videos depict violence and sex and those aren’t something you’d want your 8-year old to accidentally see. MTV has had its fair share of being on the receiving end of pretty harsh criticism for decades but these artists KNEW they were going to get banned probably from the moment they brainstormed ideas on what their video should be about.

So why did they still do it? Because back then, there was no shame in being banned or censored by MTV. On the contrary, they wore it like a badge of honor. And without the internet or social media, it was also a way to get people talking. Obviously, humans are curious by nature so once they heard MTV wasn’t going to show someone’s music video, they’re going to want to know why. And the end game? It could potentially increase sales. Bad publicity is still publicity, folks.

Now here you have it – the most insane, disturbing, disgusting, tasteless, and should-have-never-seen-the-light-of-day videos that deserved to be banned.

It starts off with two buddies filming themselves fooling around and having a grand time in a cheap motel. No big deal, really. And out of nowhere, Grohl begins fondling himself, a close-up shot of Black’s almost naked butt (okay, you can see his butt crack) and then him taking a dump, and then both of them cross-dressing with well, you just have to watch it for yourself.

MTV banned it obviously and while it seems more tolerable than the other music videos on this list, we still won’t mind if we never see this ever again.

That title is a dead giveaway that you know, this song will not be about love lost or anything cheesy. We love the song because it’s Lemmy Kilmister at his absolute best – yep, complete with all the angst and swagger. It’s hard and heavy – but the music video is another story.

MTV banned it because of its “excessive and senseless violence.” And we have to agree. But you know what, all things considered, the video may be a bit ridiculous but it’s still pretty brilliant.

“People don’t know how to be outrageous any more… If Motörhead moved in next door to you, your lawn would die.” – Lemmy Kilmister

Only Motörhead could come up with a song like this and get away with it. If anyone else did that music video, we’d be scoffing but it’s Lemmy. The guy could do a chicken dance and it will still be bad ass.

Is it creepy? Yep. Is it disturbing? Totally. If you have the chance, would you like to take back the last four minutes of your life and un-see this? 100% yes. The music is unquestionably the work of a genius. They were clearly ahead of their time and it might as well have been released yesterday.

But the video, on the other hand, is something else. If you’re easily offended, then this is definitely not for you.

“Once I got on stable ground and started to understand how my brain worked without all that, musically at least, I can do more because I can remember what I did. I can think deeper about things.” – Trent Reznor

It was only showed on MTV after it was heavily edited. That isn’t even surprising given that the video had everything that you’re not supposed to see on TV – S&M, animal cruelty, nudity and almost everything in between.

Marilyn Manson has gone past the point of being shocking. The only time we’ll be surprised is if he ever does anything that doesn’t disgust us or make us cringe. Therefore, this music video is everything you will ever expect from him and maybe a whole lot more.

Self-mutilation, sex, drugs, nudity, and bondage – it’s really a no-brainer why it was banned. Although it wasn’t released in the US, it was shown in Japan and Germany but some of the scenes were blurred.

“The video just takes you through pieces of my life that stood out. The loneliness, the self-hatred, self-destructive, I-can’t-anyone-I-know-on-the-phone-type of feeling. So there’s a series of people I don’t know — the comfort of strangers. But it just becomes excessive self-destruction, inhaling pain slowly, until it manifests in a waterfall of nosebleeds, self-mutilation and three-way sex scenes with men, and stuff like that.” – Marilyn Manson on (S)aint MV

But perhaps the most traumatizing scene was him in the bath tub. If we could un-see that, we’d be very happy. If only we could sanitize our eyes, we would’ve already done so.

If you’re not a fan of disturbing things like what you see in American Horror Story, you can look away now. It’s not as graphic as Marilyn Manson’s, but this music video from Tool is the stuff of nightmares. It’s so dark and creepy, it’ll make you want to watch Spongebob Squarepants just to at least temporarily remove the images from your head.

It was banned by MTV because of ‘disturbing content.’ It’s horrifying when you finally figure out what it means. And even though it didn’t receive airplay, it still received nomination for Best Special Effects during the 1995 MTV Music Video Awards.