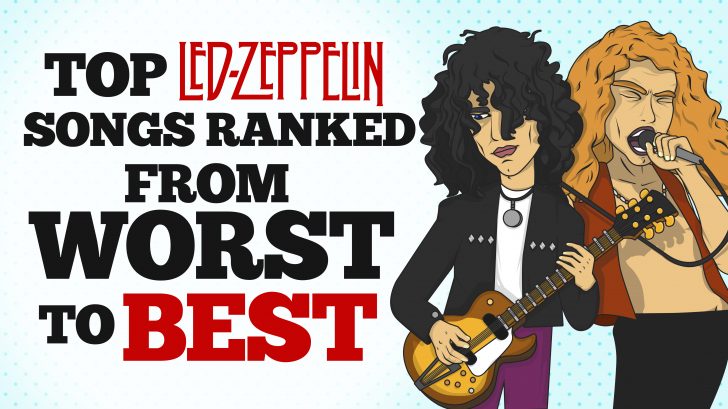 Led Zeppelin were an English rock band formed in London in 1968. The group consisted of guitar legend Jimmy Page, the seductive vocalist Robert Plant, bassist and keyboardist John Paul Jones, and the late great drummer John Bonham. The most influential and most iconic rock band who have step foot on this planet and  their music STILL CONTINUES to inspire us up to this day. If it weren’t for this band, one of these popular musicians and great rock bands today PROBABLY would NOT have existed. Let’s face it, as a classic rock fan, Led Zeppelin has been one of the main reasons why we have chosen this path. Let’s look back and see the Top Led Zeppelin Songs Ranked: Worst to Best.

Good times for rock and roll back then, bad times for it now… That’s just sad…

Featured as the opening track on their 1969 debut album Led Zeppelin. The song that will give you good times and bad times at the same time, you will surely enjoy rocking on this one but it will piss you off that the music has to end, thanks God for the replay button! Huuh!

Everything about this song will hit your every nerves. Define great drumming, you have John Bonham there, define a great guitar solo, there you have it, Jimmy Page doing his own incredible thing.

Man, imagine listening to this way back in the 70’s, after listening to a little bit of Celine Dion (wait….. am I in the wrong era???) and this song comes on! This will definitely knock your socks off!

The Zeppelin has never given us any mercy, every piece of their songs will hit you hard…. ROCKING!

A song that appeared on their 1973 album Houses of the Holy. The way they produced a sound like this is something we should all be grateful of, it’s pretty heavy! They have really shown no quarter on the way they feed people with their music!

But what’s intriguing about this song is its lyrics, correct me if I’m wrong, that this song talks about the rise of Christianity and the end of Paganism but some may refer to its meaning the same way as the Immigrant Song.

Never mind all of that, the good thing is we have a music of this kind to enjoy.

8. “The Song Remains The Same”

We all just wish that they still make this type of music today.

It is the opening track from their 1973 album, Houses of the Holy. The Song Remains The Same is the indication that music is universal, Robert Plant also said it himself. We can all experience life with one consciousness but in a subjective way through music, and this is what this song gives us… The experience!

The song is definitely one of their most underrated song. This song has absolutely unbelievable heavy tune to it, Jimmy’s guitar solo is superb. I envy those people who have lived those years and have enjoyed real music, where rock and roll was fun.

You’ll lose your eargasm virginity with this one!

First released as the second track from the band’s fourth album in 1971. The song features a guest appearance by the Rolling Stones pianist Ian Stewart.

This song will give you a stiff neck, as you will really rock on hard to it! You might even lose your driver’s license when you drive as it is played on the radio. A total definition of “Rock and Roll”? Well, the title speaks for itself, and the sound is a total genius in simplicity.

Give back the love for Led Zeppelin as they have given us a Whole Lotta Love!

It is the opening track on the band’s second album, Led Zeppelin II. With its 3 notes riff, this song has become historical and easily one of the most recognizable song of Zeppelins.

This is pure “unadulterated’ heavy music, and I don’t know why it was hated back then in the 70’s. Or maybe because the song is referring about checking out a hot hot girl and you know it, you have no shot at her, but if given the chance, she’ll definitely love you as you give your “Whole Lotta Love”.

Let’s just hope that 70’s music is going to there for us for a very long time…..

The opening track on their fourth album (1971). Black Dog, is one of their most iconic song. The song’s title is a reference to a nameless black labrador retriever that wandered around the Headley Grange studios during their recording.

This song is a force of nature, even way cooler than ice! If you’re a parent, and you have influenced your children with this type of music. That’s an achievement! Parenting success!

And it’s so freaking sad that they don’t make any kind of music like this in this generation. It’s a shame that in order to keep rocking we have to look back to hear real good rock and roll music.

Are you Dazed and Confused?

A song included on their debut album Led Zeppelin (1969). Dazed and Confused was one of their best and raw music despite that it was never really written by the band. The song was written by Jake Holmes and recorded for his debut solo album “The Above Ground Sound” and was released in June 1967.

When the Yardbirds disbanded in 1968, Jimmy Page took the liberty to musically and lyrically rearrange the song into a heavy one.

Anyone who has listened to this song, it has certainly given you a great impact.

The Hammer of the Gods! Worthy are the Zeppelins…

A song included on their third studio album, Led Zeppelin III, and was released as a single. This is one of those reasons why the Led Zeppelin is the most legendary band in all of the universe, even “ASGARDIANS” love this song. The Immigrant Song is about Norsemen fighting their way through any storm and sailing with their long boats (or ships) on a vast oceans, conquering the world!

This song can do ass-kicking any time of the day to any of the new songs today! Like the Norsemen “Vikings”, Led Zeppelin has conquered the world with incredible talent and love for music.

The only limit that this song has is that it is somewhat way too short, but hey, just replay it. Okay?

Included on their sixth album, “Physical Graffiti” (1975). The intro of this song is definitely on fire, with John Bonham playing the drums, you start head banging along with the beat. You know it in yourself that this Zeppelin piece is epic!

Some folks might even like this one over “Stairway to Heaven”, but we don’t want to have that argument, don’t we? Because any song by Led Zeppelin is definitely AMAZING! Although, this one, you have to love how musically arranged this song is, plus the seductive voice of Robert Plant. You’ll definitely murder that replay button!

Kashmir is one of the reason why Led Zeppelin became the most respectable band in history (next to The Beatles). A powerful piece of music! Indeed, this is what call a REAL music that we don’t often get in today’s music.

Tell me if this is not the most iconic and greatest rock song of all time!

A song composed by guitar hero Jimmy Page and vocalist Robert Plant for their fourth untitled studio album that we often called Led Zeppelin IV. Everything about this song will certainly make you fall in love with it and every moment of it is just as perfect as a masterpiece!!!

The studio version of this is great, but the live one…? Much greater! You won’t waste any time listening to this song even the fact that this song is one of the most played on the radio or any music streamer.

What make this song incredibly great is the slow start and as it speeds up up by the minute, you’ll notice yourself “banging your head” as John Bonham starts playing the drums! The guitar solo, the very best of it! The greatest and MOST HARD ROCKING SOLO in history! And with last line of the song by Robert Plan, it’s an indication that you have to hit the replay button.

Lucky are those who have seen Led Zeppelin live on a concert.