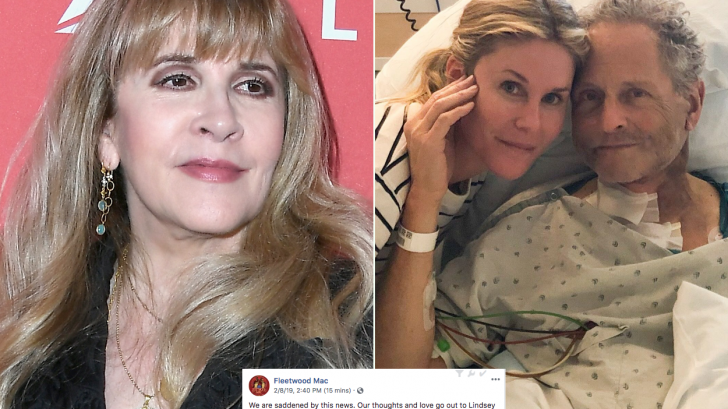 This afternoon it was reported that former Fleetwood Mac guitarist Lindsey Buckingham underwent emergency open heart surgery last week, resulting in an outpouring of love and support from friends and fans from around the world.

We can't thank you enough for love and support during this time XO❤️ pic.twitter.com/wgJxDHDlo9

Now, his former Fleetwood Mac bandmates have reached out in response to news of Lindsey’s health scare, issuing a brief but heartfelt statement of hope, healing, and well wishes.  The statement reads, “We are saddened by this news. Our thoughts and love go out to Lindsey and his entire family. We are hopeful for his speedy recovery.”

We are saddened by this news. Our thoughts and love go out to Lindsey and his entire family. We are hopeful for his speedy recovery.

This marks the band’s first public remarks on social media about Buckingham since his exit from Fleetwood Mac early last year. No matter how you feel about them or their decision to move forward without Lindsey, it says a lot about them that they’re able to send love and well wishes during his time of need.

As we reported earlier, Kristen Buckingham, who has been married to Lindsey since 2000 and with whom he shares children William, LeeLee, and Stella, took to Facebook less than an hour ago to break the news to her husband’s fans and friends around the world. Without revealing the cause for Lindsey requiring emergency open heart surgery, Kristen shared that the surgery took place “late last week” and that he is now home beginning what is sure to be a lengthy recovery process.

While Lindsey and his heart are on the mend and doing well, his vocal cords didn’t fare so well; it appears that they were damaged during the surgery and it’s unknown right now whether the damage is permanent, though Lindsey, his doctors, and the Buckingham family are hopeful that it is not.

“I am sad to say that late last week Lindsey underwent emergency open heart surgery. He is now recuperating at home and each day he is stronger than the last. While he and his heart are doing well, the surgery resulted in vocal cord damage. While it is is unclear if this damage is permanent, we are hopeful it is not.

This past year has been a very stressful and difficult year for our family to say the least. But despite all this, our gratitude for life trumps all obstacles we have faced at this moment. We feel so fortunate he’s alive. As does he. He looks forward to recovery and putting this behind him. Needless to say, all touring and shows currently scheduled have been put on pause for the moment as he gathers the strength to heal completely.

Our family thought it important to share what’s happening with Lindsey with the hope that inspires someone else to seek preventative care. Lindsey’s family has a history of heart issues, having lost both his father at 56 and his brother at 46 to heart related illness. If anyone is experiencing even the mildest of symptoms we encourage you to seek the care of a physician.

We are so thankful for the kind and generous love given by the people surrounding Lindsey, me and our kids throughout this emotional time. We can’t thank you enough for all you did for our family. We will never forget you. XO.”

She then shared a photo of Lindsey recovering in the hospital, looking exhausted but damned glad to be here.

I am sad to say that late last week Lindsey underwent emergency open heart surgery. He is now recuperating at home and…

It’s a miracle that Lindsey is alive, given his family’s tragic history with heart issues.

His father, Morris Buckingham, died at the age of 56 due to heart related problems; his brother, Olympic medalist Gregory Buckingham, died at 46 due to a heart attack. Understandably, Lindsey and Kristen urge anyone “experiencing even the mildest of symptoms” to seek the care of a physician as soon as possible.

For now, all tours and shows scheduled have been canceled to allow Lindsey time to recover at home in the arms of his family and heal completely from his ordeal. Our hearts go out to both him and his family during this difficult time, and we’re so, so glad that Lindsey is on the road to recovery.