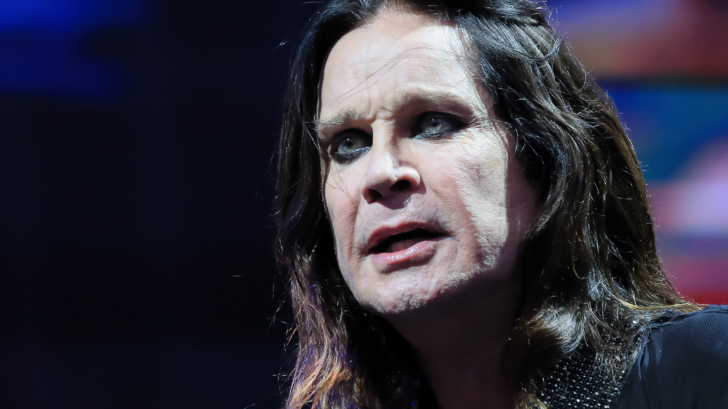 After a pretty scary week, Ozzy Osbourne is on the mend.

The 70-year-old rock legend has spent the last week hospitalized after complications from the flu scared his doctors into admitting him, and in the past few days alone it was reported that Ozzy was actually moved to the ICU due to “grave concerns”.

A ‘source’ close to Ozzy revealed that he “was reportedly sent to the critical facility in a private hospital after his bronchitis worsened, amid fears he could develop pneumonia,” which is dangerous in the young, but for someone over 70 can and does very quickly turn fatal.

Sharon Osbourne, Ozzy’s wife and manager of more than 35 years, returned to her daytime talk show The Talk today where she updated fans on Ozzy’s condition.

“He’s doing good. He’s breathing on his own,” she said. “He’s overcome by the response he’s had.”

Speaking of updates, that mysterious ‘source’ close to Ozzy gave an update of their own to The Sun:

“Poor old Ozzy hasn’t had the best of times. He’s been really struggling with flu which turned into bronchitis. Doctors feared he could contract pneumonia which, in a person over 70, can be fatal. This sparked a lot of panic among those closest to him, but doctors reassured everyone he was in the best possible hands. Ozzy’s a fighter, and is getting better day by day. The worst is over, he’s smiling again, and he can’t wait to get up on stage.”

In Case You Missed It…

Last week, we reported that Ozzy Osbourne was admitted to the hospital due to complications from the flu.

In a statement issued to Twitter, wife and manager Sharon Osbourne confirmed Ozzy’s current hospital stint, citing “some complications from the flu” as the basis for his stay. The statement reads, “As some of you may have heard, Ozzy was admitted to hospital following some complications from the flu. His doctors feel this is the best way to get him on a quicker road to recovery. Thanks to everyone for their concern and love.”

As some of you may have heard, Ozzy was admitted to hospital following some complications from the flu. His doctors feel this is the best way to get him on a quicker road to recovery. Thanks to everyone for their concern and love.

The news came one week after it was announced that Osbourne, 70, was forced to postpone the entire UK and European leg of his No More Tours 2 tour due to a “severe upper-respiratory infection”.

Initially, the plan was to postpone only the tour’s first four dates to allow him time to recover from the flu, but a second visit with his doctors last week left them fearful that his upper-respiratory infection could turn into pneumonia – not a far fetched possibility given how intense his shows are, paired with the cold weather currently hitting Europe.

A statement was issued on Ozzy’s behalf:

Ozzy has been forced to postpone the entire UK and European leg of his “NO MORE TOURS 2” tour on doctors’ orders.This…

Ozzy offered his own disappointment and frustration, saying:

“I’m completely devastated for having to postpone the European leg of my tour. It just seems that since October everything I touch has turned to shit. First the staph infection in my thumb and now coming down with the flu and bronchitis. I want to apologize to all of my fans who have been so loyal over the years, my band, my crew and to Judas Priest for letting you all down. However, I promise the tour with Judas Priest will be completed. It’s being rescheduled right now to start in September.  Again, I apologize to everyone. God Bless. Love you all, Ozzy.”

From the looks of it, the flu’s been giving Ozzy hell. Two weeks ago, he shared a photo of himself with a burst blood vessel in his eye – the result of coughing too hard.

Coughed so hard I burst a blood vessel in my eye pic.twitter.com/EPuDnN8Mpa

Ouch! Here’s hoping that Ozzy gets to feeling better soon – the flu is no joke, and when you’re Ozzy’s age it can be even more dangerous. This isn’t the first time in recent months that Ozzy’s been sidelined by illness; late last year a staph infection forced the cancellation of several North American dates on the tour as Ozzy underwent surgery to remove the infection from his hand.

Sat Oct 6 show at @ShorelineAmphitheatre in Mountain View, CA has being postponed due to illness. The Rock and Roll Hall of Fame inductee and Grammy®-winning singer and songwriter is being treated for an infection, which required surgery on his hand this morning (Saturday, October 6). OSBOURNE will spend a couple of days at Cedars-Sinai in Los Angeles where he’ll remain under doctor’s care as they monitor the infection. The show is part of OZZY’s North American “NO MORE TOURS 2,” produced by @LiveNation, and is expected to resume on Tues, October 9 at @MattressFirmAmp in Chula Vista before this leg of the tour wraps with shows at the @HollywoodBowl (October 11) in Los Angeles and Las Vegas (October 13) at the @MGMGrand Garden Arena. @StoneSour will perform on these three shows. The Oct 6 show has been rescheduled for Tuesday, Oct 16 (support act for the new date is TBA). Ticketholders for the October 6 show should hold on to their tickets, as they will be honored at the rescheduled date on October 16. Refunds are also available at point of purchase.

Dates for No More Tours 2 are set to resume on March 9th in Australia,  with the corresponding Judas Priest dates tentatively scheduled for September.