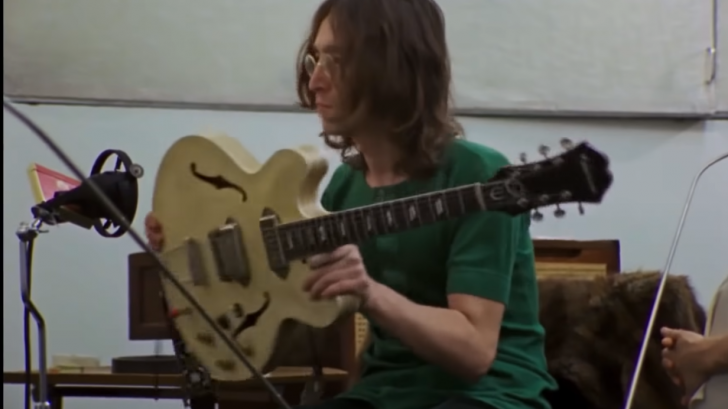 40 years after his cunning murder at the hands of Mark David Chapman, we recount John Lennon, focusing on a subject that is rarely touched on in the different texts and tributes that are made to him year after year: his work as a guitarist.

Was John Lennon a great guitarist? Many say no. Of course, he was never at the level of Jimi Hendrix, Eric Clapton, or Jeff Beck. The guitar solos department at the Beatles belonged to George Harrison, as neither he nor Paul McCartney was that efficient in that regard.

During the first stage of Beatlemania, Lennon’s work on the guitar was on the rhythm, and although it may seem that he did nothing, there are quite complex moments in the execution of his guitar that are not “just” anything.

For example, in one of their first hits, “All My Loving” we can hear the fast triplets with which Lennon beats the rhythm throughout the song without stopping.

Or in “‘ Til There Was You ”we find a rather complicated rhythm that flirts with Bolero and Jazz.

The first formal solo that John Lennon recorded with the Beatles, was in the song “You Can’t Do That” on February 25, 1964. It is not the most dazzling solo in the world, but with it, the definition that many years would be clear would be, Lennon would do his technique: “I’m a primitive guitarist.”

Around the same time, he would record another solo on their cover of “Long Tall Sally”, although in the final mix it was a bit imperceptible, not his 12-string guitar solo on “Every Little Thing”.

From 1968 until the end of his career, Lennon devoted himself to experimenting with his guitar and creating great riffs embodied in various Beatles songs and on some of his solo albums.

Starting with the White Album, which would be practically a sampler of how the Beatles would later sound separately, Lennon has a kind of “creative rebirth” after the years lost in the LSD haze, emerging again as a dominant force in the compositions and shows signs of having a fascination for the new “hard” sounds that were already beginning to develop around him with bands like Led Zeppelin and Jimi Hendrix.

This is evident in songs like the sensational “Yer Blues”, in which according to him he was trying to imitate Muddy Waters, with dark, suicidal lyrics, and a great solo from his Epiphone Casino (which from then on would become on his battle weapon) with an oscillating horn (the same one that Eric Clapton would later use for the solo on “While My Guitar Gently Weeps”).

Another track of the same caliber is “Revolution”, although it did not remain on the album, but was released as side B of the single “Hey Jude”. It is the Beatles song that contains the most distortion of all, which was achieved by plugging John’s guitar directly into the Abbey Road console and turning the volume all the way up to drive the knobs. A loud riff and a heartbreaking scream were intended to be a satire on heavy bands like Led Zeppelin, who were then described as “revolutionaries.”

His acid and scathing lyrics about what Lennon thought of the revolutionary movements of the time were also the first of a political nature in the history of the band. Other tracks of fierce Lennonian riffs were “Happiness Is a Warm Gun” and their contribution of heavy and distorted bass on the very long (albeit edited end) “Helter Skelter”. Of course, there was also room for ballads in which John flaunts an impeccable strum “Julia” and “Dear Prudence”.