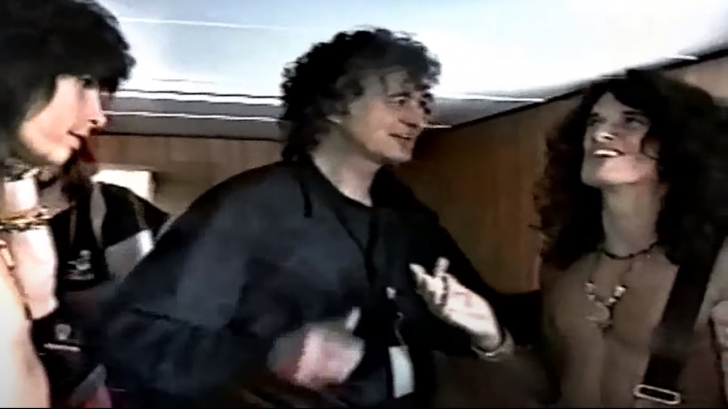 In 1995, the Rock and Roll Hall of Fame opened its doors to Led Zeppelin, twenty-five years after – as the rules dictate – the debut of the English band. That night the master of ceremonies was appointed by Steven Tyler, singer of Aerosmith. Tyler gave a funny and anecdotal speech. The New York vocalist recalled how his first band was the opening act for the Yardbirds, the band from whose ashes Led Zeppelin emerged, but he also recounted an embarrassing moment.

Steven Tyler recalled at the beginning of his speech the two times Jimmy Page made him cry. An anecdote that caused laughter from the rest of the guests at the evening. “In 1969, I saw Led Zeppelin in Boston, they ran out of songs after playing their first full album and had to cover it because people wouldn’t let them go,” Tyler began by recounting.

Below In 1990 A Backstage Peek At Donnington With Aerosmith And Jimmy Page – One Of Those Rock And Roll Moments.

In 1990, Aerosmith are performing at Monsters of Rock, Castle Donington. The Toxic Twins met with Jimmy Page to address bringing him on stage for “Train Kept a Rollin'”.

A youthful and fit Joe Perry tells Jimmy Page which solo he will perform, how great is that??

The other part of this clip – Aerosmith taking Jimmy Page on stage to rock out!

Warning: This will give you chills!