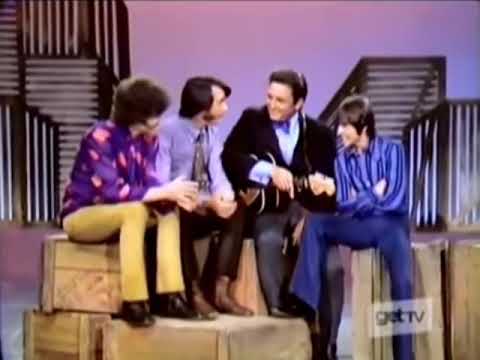 The show had two seasons airing on ABC from 1969 to 1971, highlighting some of music’s most well-known artists at the time as guests.

One notable appearance on the show, which was aired on July 19, were the Monkees. Cash performed with the group to sing during their segment.

During their appearance on the episode, the Monkees had transitioned as a trio. Exhausted, Peter Tork had left the band before appearing at the show.

Micky Dolenz, Davy Jones, and Michael Nesmith had released the Instant Replay studio album after Tork left earlier that year and were planning for their first tour without him.

Cash introduced the Monkees by singing the first lines from their 1966 classic, “Last Train to Clarksville,” soon after the Monkees took over performing the song in less than a minute before changing to “Nine Times Blue.” After that song, Cash joins them on stage to perform “Everybody Loves a Nut.”