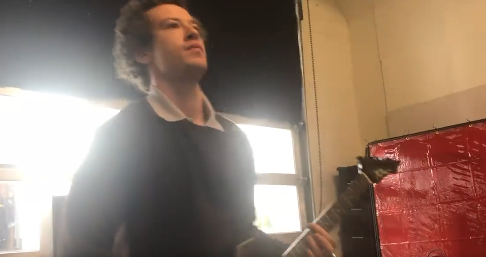 Stranger Things returned to the Netflix streaming service with its season 4 after three years and renewed the phenomenon with a new part of the story that greatly captivated fans. In the nine episodes released there were great moments that were iconic, but there is no doubt that Eddie Munson playing ‘Master of Puppets’ is one of the main ones. Now a video of the actor, Joseph Quinn, practicing on the recording set has been released and has gone viral!

Volume 1 shows us Eleven in the midst of regaining her powers and learning of her bond with Vecna ​​at the time of the first opening of the portal to the Upside Down. While the young woman tries to escape, in volume 2 we see part of the gang of friends in Hawkins trying to stop the threat by their own means. One of the phases of the strategy depends on Dustin and Eddie, who starts playing Metallica’s song to distract the Demobats.

The scene was praised and is listed as one of the best of Stranger Things season 4, especially because of what happened later, where these evil bats from the Upside Down end up killing Eddie. From the get-go, the filmmakers made it clear that Joseph Quinn is the real guitar player, but there were some who were wary of this. To clear up any doubts, a video of the actor practicing Master of Puppets was released. Safety pin!

The video was posted by the Twitter account of the series’ writers last Sunday morning under the motto: “practice makes perfect”, with a truly impressive result. From the moment of its released, it obtained more than 215 thousand likes and about 50 thousand retweets, in addition to thousands of comments praising Quinn’s performance, as well as reminding his character that he earned the affection of the fandom in a few chapters.