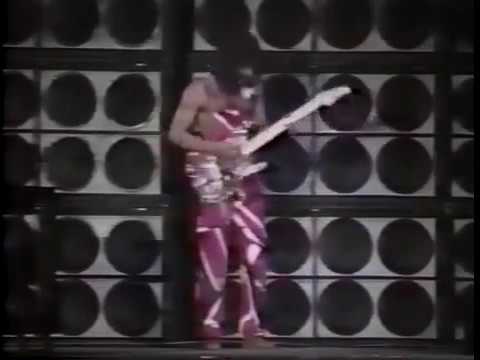 Van Halen, without a doubt, apart from the group being good, what made them famous, despite Dave Lee Roth, is the guitar. Edward took the tapping technique to ultra-fast extremes not seen to date. Nor is it that tapping had been seen much until then … but he did not invent it despite what he insists, that even Brian May does it on previous Queen albums (although more slowly). Anyway, it is that he even turned around at concerts so that people did not “copy” him.

Track after track, Eddie Van Halen had fully satisfied anyone who enjoys rich, distorted, and thick guitars (that brown sound), despite the years and the fact that the technique that made him so famous is far exceeded by the guitarists of today. But, going back a few decades, it is not hard to see why all guitarists wanted to be Eddie Van Halen.

These methods were in full play at Van Halen’s performance at the US Festival on May 29, 1983, at Glen Helen Regional Park in San Bernardino, California. The show indicated the end of the band’s 1983 Hide Your Sheep Tour.

In remembering Eddie Van Halen, keep going below and watch him shreds his way in front of 180,000 people at the 1983 US Festival.