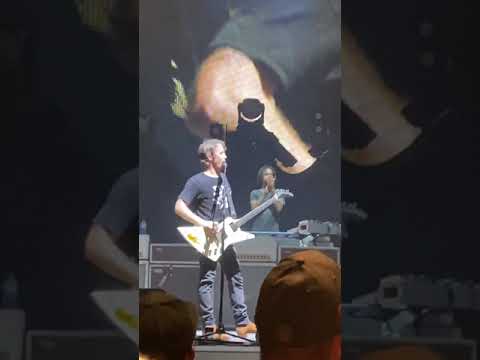 This past week there were two major losses in the music industry. Joey Jordison, former drummer of Slipknot and Dusty Hill, member of ZZ Top. Artists around the world remembered the musicians, however, Foo Fighters took advantage of one of their presentations to pay tribute to the bassist.

ZZ Top issued a statement on its social networks in which they announced that the bassist, just 72 years old, had died at his home in Texas while he was sleeping. After this sad news, it was Billy Gibbons who said that the band would continue with their tour without the presence of his friend.

While the band was performing at the Andrew J. Brady ICON Music Center in Cincinnati, the Foo Fighters offered a brief tribute. The drummer, Taylor Hawkins, even wore a tank top that had the legend ‘Dusty RIP’ on it. To top it off, they also sang some ZZ Top songs like “Beer Drinkers and Hellraisers” and “La Grange”.

On July 28, the famous bassist passed away at his home while he was sleeping. So far the causes are unknown but some fans say it could have been after he underwent surgery on his hip that had retired him from the stage in recent months.