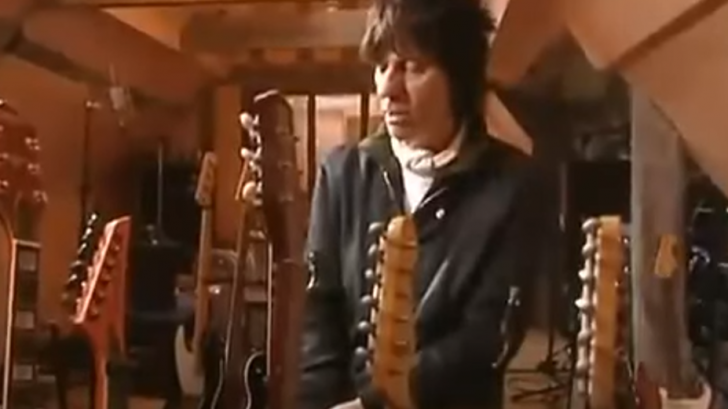 In the video down below, Beck takes us to what appears to be the dusty attic of his home to display some of his most valued guitars while going through his collection. Everything from a “bastardized Telecaster” to a 1954 Sunburst Stratocaster, known as the “big daddy of the Strat series.”

The great six-string player, who tragically passed away today, had devoted enough time to it to last for several lives, and the array of instruments he had gathered along the way was equally astounding.

Beck had a variety of guitars, not just Fenders, despite the fact that in the latter stages of his career, he preferred playing Stratocasters. Although Beck refers to the instrument as an L5, in reality, he is holding a Gibson ES-175, a similarly styled semi-hollow body electric guitar, which he used to mimic Scotty Moore, Elvis Presley’s top picker.

The collection’s centerpiece may very well be Beck’s black Gretsch Duo Jet. That specific guitar had been popular in Britain in the early 1960s because of its association with Cliff Gallup, the lead guitarist for Gene Vincent, and the Blue Caps, the pioneers of rockabilly. David Gilmour and George Harrison have both used the Duo Jet, while Beck used it to record a complete album of Vincent’s songs for the 1993 album Crazy Legs. Even for the record cover, he supported it.

The last guitar Beck plays has a unique significance. Beck adds that the guitar is unique for two reasons, despite the fact that he calls the Maccaferri model he chooses “plastic.” The first is that Jimmy Page, the guitarist for Led Zeppelin, gave it to him as a present. The second is that jazz legend Django Reinhardt used the same brand of guitar during his career.

Beck acknowledges that the Maccaferri is the model that he chooses most frequently when he wants to play anything while watching television or “just noodling about,” as he puts it, out of all his valuable and pricey instruments. It only goes to show that, despite certain degrees of celebrity and renown, the finest presents are frequently those that are high-quality and come from close friends.