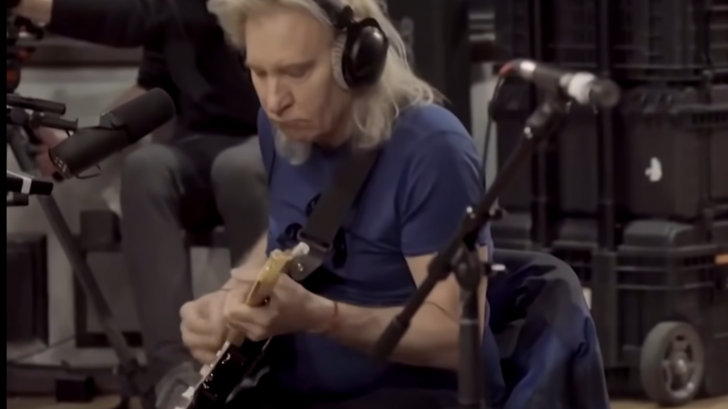 The song is a nostalgic journey into the guitarist’s on-stage and touring experiences. It was recorded with the Beatle legend: Ringo Starr (Joe Walsh brother-in-law and drummer for The Beatles).

Last month, Joe Walsh performed with some heavy hitters in the rock genre for his “VetsAid 2021: The Basement Show”.

The collaboration between the two happened just last year’s December. It’s a jam session of Walsh’s Funk #49 along with other famous musicians such as Benmont Tench, Waddy Wachtel, Lee Sklar and Russ Kunkel.

“We filmed me making some new music with the best of the best of the session guys in Los Angeles,” Walsh complimented Waddy Wachtel, who often performs with him in his solo band, Heartbreaker Benmont Tench, Russ Kunkel and Lee Sklar.

“I had a couple of guests come by,” he says. “Edge (of U2) came by and my brother-in-law Ringo. It was kind of open house for a while, and I’m just going to give everybody a little glimpse of my new music.”

Joe Walsh is known primarily for being a guitarist for the Eagles. But before being part of the legendary American band, which he joined in 1976, he had time to take his first steps, both with Barnstorm and, above all, with the James Gang.