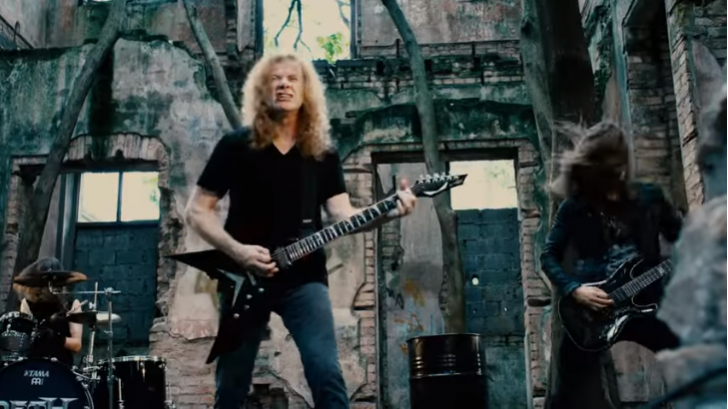 You can check out the music video down below.

Megadeth’s skull-faced mascot Vic Rattlehead is armed with a katana sword, battling supernatural forces, and searching through a cemetery in search of a captive boy in the new video.

Easter-eggs can also be seen in the new video, like the classic Megadeth albums Rust In Peace and Peace Sells… But Who’s Buying?. And the “Tornado of Souls” in the gate of the cemetery. – So freaking awesome!

“When we were on tour in Sao Paulo in 2016, we filmed the Conquer Or Die video. We were so impressed with Brazilian award-winning director Leo Liberti, that we had him do the Lying In State video as well. We had several friends and fans of the band, as well as the production crew, play roles in the video. Huge thanks goes to guitarist Kiko Loureiro for introducing us to Leo. I especially like how bad ass Vic was with the sword. Who knew?” – Dave Mustaine

You will love everything on this new music video, the suits, the effects, and on top of that, the great freaking song! Megadeth is a band that got better with age! Kudos to DAVE MUSTAINE! A true legend, he never stops working for the sake of HEAVY METAL. He is The Metal!