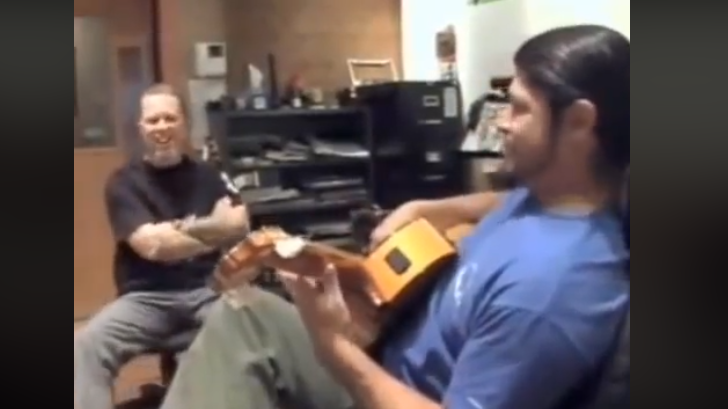 This Is Too Good To Pass Up

Robert Trujillo can kick ass which, if you think about it, kind of runs in the family. Remember his 12-year old son who’s touring with Korn? Yep, they’re both baddies like that. Robert is obviously no slouch when it comes to guitar playing – he can play with the best of them and most likely outperform them all at that.

As it turns out, he’s more than just a stellar bassist – he can take on the role of a guitarist too which means Kirk Hammett can pack his bags and go home. LOL. We’re just kidding – it’s all in the name of fun. So no haters please, the boys were just having a good time. Although hey, this is still pretty cool and mindblowing.

Besides, you can feel his passion for music and it’s easy to tell how much energy he brings to the band.

Then again, being with Metallica isn’t easy especially when you have to learn so much for so little time which is what happened to Robert when he joined them. But he somehow managed.

“It’s like you’re caught inside a massive set of waves. You get thrown, you’re down under, and you come back up again and get thrown around some more. Now I feel I’ve come out and seen the light of Metallica. I feel more comfortable with the catalog. But I also feel more comfortable with the guys. We’ve grown together, connecting on tours past, knowing how each personality clicks. You gotta know how to balance each person, because they’re so different.” – Robert Trujillo

Watch and enjoy the clip!