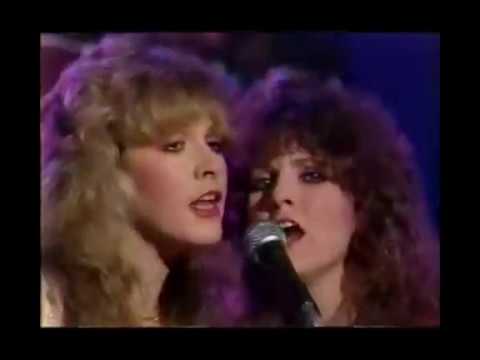 Stevie Nicks is the only woman to be inducted into the Rock ‘n’ Roll Hall of Fame twice: in 1998, with Fleetwood Mac, and in 2019, for her solo career. It’s practically impossible to find an ear that doesn’t recognize the chords and lyrics of “Landslide” or “Dreams” – even more so who doesn’t recognize the characteristic voice of these two songs. The musician’s trajectory is a symbol of revolution, memory, and female power.

Her second solo album, “The Wild Heart”, arrives in 1983 and reaches the mark of double platinum, taking the position of number five on the Billboard 200. During the tour of her solo debut album and the release of the second, Nicks also shows his loyalty to collaborations in music. On tour, she meets Sharon Celani and Lori Perry, who would become her official backup vocals to this day. In the recordings of the second album, she begins her life partnership with the songwriter and musician Sandy Stewart, responsible, for example, for the authorship of the hit “Nightbird”.

The song “Nightbird” laments the passing of Robin Snyder Anderson, a friend of Stevie’s from childhood. “This song does go beyond ‘Edge of Seventeen.’ It talks about my friend Robin, the challenges faced by female rock ‘n’ roll singers, death, and a spirit calling. She performs the song with her sister-in-law, Lori Perry-Nicks during her Solid Gold appearance in 1983.

An iconic tv performance, Stevie’s rare live performance of “Nightbird” with Lori Nicks on Solid Gold is unmatched. Stevie was in top form, radiating with radiance and delivering a powerful, subtle vocal performance.