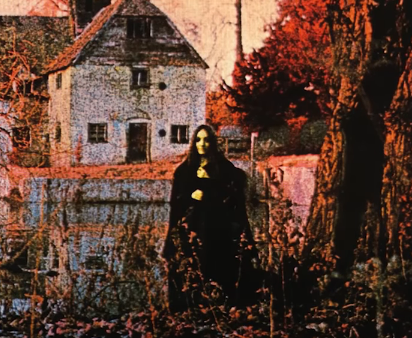 When Black Sabbath’s self-titled first album was released in 1970, the entire world was taken by surprise. Black Sabbath were too busy honing the most oppressive sound ever made at that time, while most people were still attempting to come to grips with the idea that The Beatles were eventually set to break up or were enthralled by what their successors Led Zeppelin were doing.

With songs like “Black Sabbath,” “The Wizard,” and their rendition of Crow’s “Evil Woman,” Sabbath established themselves as the most innovative and captivating group of the time. On Black Sabbath, they established many of the crucial pillars of what would be referred to as heavy metal, revolutionizing the globe in the process. They were genuine and strong without the excessive grandeur of Zeppelin and Deep Purple. But the decade was going to be theirs; this was just the beginning.

While Black Sabbath’s music is excellent, one of the album’s standout features is its cover image, which effectively encapsulated the album’s mood of gloom. The artwork contributed to the rumor that the band were Satanists or somehow connected to the occult, which worked to their advantage and increased their fame. It depicted a strange, green-looking woman amid an eerie woods.

Fans pondered the mystery of this masked character for years before Rolling Stone ultimately disclosed it in a retrospective in 2020, the year the album marked 50 orbits of the sun. The publication explained the setting, a 15th-century water mill at Mapledurham in Oxfordshire, and revealed that the woman on the cover is a model named Louisa Livingstone.

Livingstone’s five-foot height is mentioned in the article, and the late cover photographer Keith Macmillan, who passed away in 2012, is reported as saying that he picked her because it makes the surroundings appear more expansive and threatening.

“She wasn’t wearing any clothes under that cloak because we were doing things that were slightly more risqué, but we decided none of that worked,” according to Macmillan in the Rolling Stone article. “Any kind of sexuality took away from the more foreboding mood. But she was a terrific model. She had amazing courage and understanding of what I was trying to do.”

“I remember it was freezing cold,” at the time of the photoshoot, Livingstone, who was still in her adolescent years, added. “I had to get up at about 4 o’clock in the morning. Keith was rushing around with dry ice, throwing it into the water. It didn’t seem to be working very well, so he ended up using a smoke machine. It was just, ‘Stand there and do that.’ I’m sure he said it was for Black Sabbath, but I don’t know if that meant anything much to me at the time.”