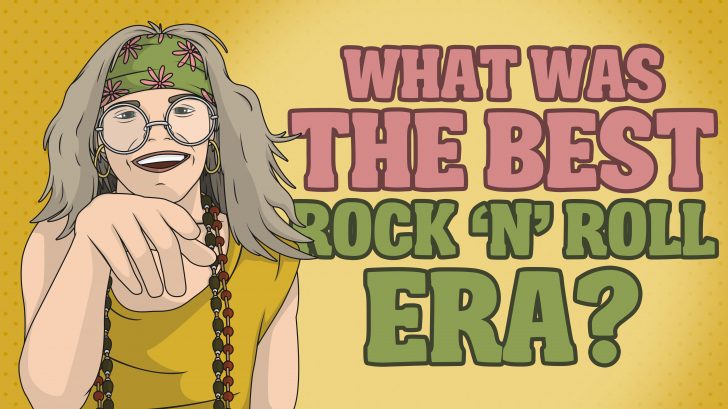 If we are asking what was the best rock n roll era, then WITHOUT A DOUBT, it would be the 60’s! This is definitely the best rock n’ roll because it has provided the greatest rock music! This was the most INFLUENTIAL era for all the rock artists who came after.

There was that Woodstock Festival in 1969, the organizers of the festival had planned on 200,000 people attending but instead of those numbers, 400,000 people came! Some of these people got in for free because the organizers of the said festival didn’t have the power and resources to keep these people from coming in. So why am I telling you this? Because that was soooooo freaking Rock N’ Roll!

The lineup for the three-day festival was Jimi Hendrix, Santana, The Who, The Grateful Dead, Janis Joplin, Joan Baez, Crosby, Stills, and Nash, Creedence Clearwater Revival, Jefferson Airplane, and Sly and the Family Stone. All of these acts were the GREATEST in their own right and the most influential musicians we have ever known!

Not only that, the 1960’s had so many other great musicians too. The Beatles, The Rolling Stones, Led Zeppelin, The Doors, and Frank Zappa, The Moody Blues, Chicago, Joni Mitchells, and Black Sabbath (the band who created the Heavy Metal). These were not just the greatest. These were the LEGENDARY MUSICIANS! THE HEROES OF THOSE TIMES.

AND Jimi Hendrix, who could ever forget this man! The most iconic rock performer, one of the most epic performances in rock history would be seen on this guy!

The 60’s was definitely the most important part of Rock N’ Roll. This was the era in which CLASSIC ROCK came to thrive. The level of music in the 1960’s was out of reach!

But whatever, Rock will always be PERENNIAL, it will keep BLOOMING, and will keep COMING BACK. So, for those about to rock. WE SALUTE YOU!