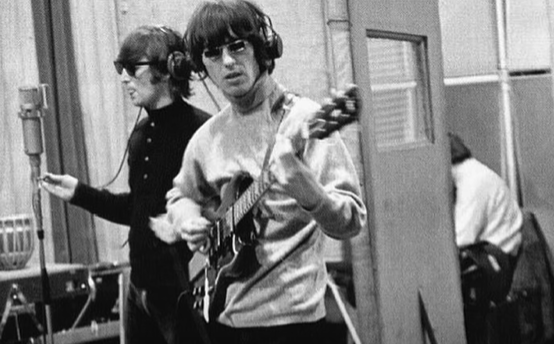 Written by Lennon and McCartney, the song belongs to the Revolver sessions but was released prior to the album, in June 1966, as the B-side of the single “Paperback writer.” Featuring a masterful rendition by Ringo, witty McCartney bass, and strange reverse vocals, this is The Beatles’ first psychedelic piece, heralding a revolution on the way.

‘Rain’ is a burst of psychedelic rock with all the elements that made this style so impressive: distorted guitars, ethereal vocals, and sound effects.

Recorded on April 14, 1966, in Abbey Road studio 3, as detailed in the book All About the Beatles (2013, Blume), by Jean-Michel Guesdon and Philippe Margotin, in the absence of an accompaniment they decided to play it fast and then slow it down until finding a heavy and thick sound, in the vein of “She said, she said”.

Like most Beatles recordings of the time, the single “Paperback Writer / Rain” was mixed in mono, especially intended for vinyl. This is the format in which the quartet’s music sounds best, over CD and the super-compressed Mp3.

Furthermore, that single sounds exceptionally good. The secret lies in a new device used in the mastering process, that is, in the final phase of the recording work in which the sounds are balanced to leave them at an optimal volume for their reproduction.