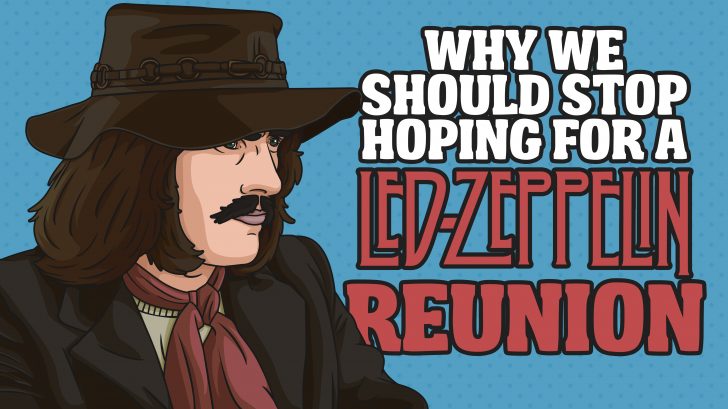 In 1980, the heartbeat of Led Zeppelin suddenly stopped when their beloved and celebrated drummer John Bonham suddenly died. It has been 40 years since one of the most legendary rock bands ever broke up. Front man Robert Plant started his solo career in 1982 and carried the burden answering the question of the band’s possible reunion ever since. Fans have been hopeful for four decades. The band had a total of eight studio albums in the 12 years they were together. And people want a ninth. People STILL want to see Zeppelin together again even after Plant repeatedly says through the years that it’s a no-go. So maybe it’s time for people to throw their hopes away and finally accept that there might never ever be Led Zeppelin reunion. Here are the reasons why:

Not Without John Bonham

When John Bonham passed away from a massive drinking binge, the rest of the band, Jimmy Page, John Paul Jones, and Robert Plant officially ended the band, stating,

“We wish it to be known that the loss of our dear friend and the deep sense of undivided harmony felt by ourselves and our manager, have led us to decide that we could not continue as we were.”

When Plant was giving his first solo interview, he was asked to state “just for the record” if the band can still be revived or if it’s already a goner for good. Plant responded by saying,

“After we lost John, we issued a statement to that effect, but everybody read it as being ambiguous. I can’t even remember the wording of it now. But no, there’s absolutely no point. No point at all. There are certain people you don’t do without in life, you don’t keep things going for the sake of it. There’s no functional purpose for keeping things going. For whose convenience? Nobody’s, really. … For all the s*** that hit the fan those many times … we all sort of rose out of it together going, ‘We don’t care – take this!’ And you don’t start carrying on with people who weren’t a part of that. Impossible.”

Jason Bonham Isn’t Really His Father (According to the band)

John Bonham did not leave this world without a legacy of his talent: his son. Jason Bonham played for when they briefly got together on stage again at London’s O2 Arena in December 2007 in honor of Atlantic Records founder Ahmet Ertegun. However, the band was not keen on keeping him around enough for Led Zeppelin to ultimately reunite.

In 2012, Jason told a Florida radio station that Plant informed him, “John was the drummer in Led Zeppelin, and John was part of me and Jimmy and John Paul. We shared something very, very special.”  Jimmy Page also reiterated  that same statement, saying, “Led Zeppelin was an affair of the heart,” he told Rolling Stone. “Each of the members was important to the sum total of what we were.”

John Paul Jones went into very odd music ventures on his own after the band split. He created a new folk trio called Snoweye and they played in the Norwegian music festival called Varangerfestivalen. Those who have heard Jones’ Norwegian folk songs describe them as “a beautiful musical landscape. Ethereal, yet soulful. Elusive, yet instinctive.”

Not only is he into Norwegian folk music, he’s also into opera and he’s been working on his own take on August Strindberg’s The Ghost Sonata. Jones’ music publisher says that his opera will be performed sometime in the 2019/2020 opera season. Jones himself says of his ‘masterpiece’,

“The depth of the characters and the emotional undercurrents give great scope for music and I intend to use the full range of the symphony orchestra to convey both the atmosphere, suspense and passion of the piece employing mainly lyrical and tonal, yet progressive materials.”

Either way, he really is apparently too busy with his passion projects to even have time to think about a Led Zeppelin reunion.

Jimmy Page has been teasing people about his sophomore album ever since he released his only solo album Outrider in 1988. 30 years on, the world is still waiting on a follow-up. Aside from his solo album, his other post-Zep projects include a collaboration with Whitesnake frontman David Coverdale, and another one with Robert Plant called Walking into Clarksdale released in 1998. He did drop some hints about his next solo project in 2015 when he talked to Rolling Stone, saying,

“I’m not going to tell anybody anything. I don’t want to give people ideas. … I prefer to just get people by the jugular — when I’m ready.”

We’re ready when you are, Jimmy!

Robert Plant Puts The Past Behind

Robert Plant has been bombarded with “is Led Zeppelin going to reunite?” questions every single time he is interviewed. However, the truth that people find hard to swallow is that Robert Plant is so over [Led Zeppelin]. To him, it’s done, it’s part of his life that is not really worth revisiting. All he wants to do is to move on.

“You have to be creative and imaginative and move on. And I think the great essence of Led Zeppelin is the creativity and imagination that developed with each project. And a project is a project, it’s not just going back and revisiting the past, it’s moving forward,” Plant said a joint interview with Jones and Page. “I don’t see us being a stadium act … going round and round making everyone feel great playing the hits.”

“If we’re capable of doing something, in our own time, that will be what will happen. So any inane questions from people who are from syndicated outlets, you should just really think about what it takes to answer a question like that in one second. We know what we’ve got, you know.”

“You can’t ever really go back. It’s tough enough repeating yourself with something that’s a year old, never mind 49 years old,” said Plant. “I’ve got to keep moving.”

Robert Plant has moved on and he wants everybody else to do the same.

Age is Catching Up

It’s the harsh reality: Led Zeppelin is old. Robert Plant, Jimmy Page, and John Paul Jones are well into their 70s. It’s been more than a decade since they last played on stage together. Though they do still play and perform, they do so separately in their own solo shows. They are Septuagenarians and the human endurance at that age is not as good as it was 50 years ago for them. Bones are more fragile, accidents might happen. Maybe it’s better for them to slowly seep into retirement in peace, without the stress and pressure of a reunion.