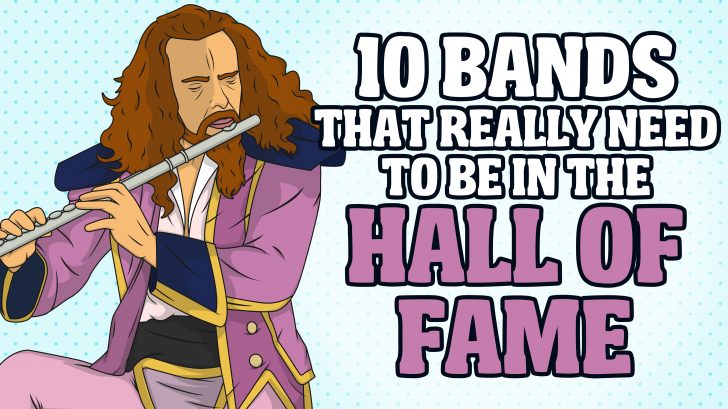 It is genuinely surprised that so many Rock and Roll Gods haven’t inducted yet. What’s wrong with the Rock n’ Roll Hall of Fame? Seems like they are ignoring a lot of greats, instead, they are going for not-so-well deserving bands and artists. Everything about Rock n’ Roll Hall of Fame is a joke. Everyone who is mentioned in this list is worthy and well deserving of the honor. The fact that they aren’t yet in the rock hall is a goddamn joke! It will definitely pissed you off! AND WHY THE HELL TUPAC GOT IN? Not that I’m against him. This is ROCK AND ROLL FOR GOD’S SAKE!!!! What the hell is wrong with them!?

They are one of Progressive Rock forefathers formed in London in 1968. It’s a troubling fact that this band has not yet been inducted. So many progressive rock bands have been left out, especially King Crimson. They should have been inducted years ago, they surely deserve to be in. We hope that Rock and Roll Hall of Fame could just “get it over with”. Nothing’s more deserving than King Crimson. They should fix their freaking system and lot of bullshit and start inducting these rock bands before any non-rock genres…

Better Late Than Never. Looks like things are turning up pretty well for The Moody Blues. Finally, the band is going to be inducted alongside with Nina Simone, Bon Jovi, The Cars and Dire Straits in Rock and Roll Hall of Fame. RRHOF made a good decision with this one because The Mood Blues really need to be included in the Hall of Fame.  Like the Beatles, their music changed through the years. Considering that they made incredible records like “Days of Future Passed”, it is an unbelievable fact (although, the long wait is over) that they were not in the RRHOF years ago.

In terms of their musical achievements, Def Leppard certainly created some of the biggest hits back in the ‘80s. “Pour Some Sugar on Me”, “Hysteria”, “Love Bites” and “Rock of Ages” remain intact in our hearts. They have been pretty much eligible for more than a decade now and yet they haven’t reached the finalist. So it remains a question if Def Leppard will ever get inducted into the Hall. The group is worthy of the honor and no one can encroach the things that Def Leppard accomplished in their careers. It looks like they will not be inducted very soon or it may never happen, but they do deserve to be in.

Selling over 80 million albums and influenced a whole decade of music. They belong in the Rock Hall, it is pretty ludicrous to even debate it. Mötley Crüe is more deserving than the majority of bands and “RAPPERS” that are already in there. Looks like it will never happen, because the people who nominate are definitely a joke, they are the main reason why the will never get in. It will always be another band who is not rock n’ roll. Mötley Crüe has demonstrable influence and significance within the history of rock n’ roll, they rightfully deserve to be in…

A lot of bands including this one should have been inducted a very long time ago. It seems really hard not to care. Just because this band never really achieved a wide commercial acceptance like Nirvana and Pearl Jam doesn’t mean they are not worthy of the honor… Soundgarden is definitely an acquired taste. Especially with Chris Cornell incredible singing who has influenced a lot of singers in the industry. There is no doubting that their credentials are pretty damn hard to miss.

Despite being eligible since 2003, it is the first time they have made it on the list. They are now among the nominees for the Rock n’ Roll Hall of Fame class of 2018. It is a substantial thing that they have found notice of Dire Straits. They belong in the Rock Hall. Not everyone deserves even more than Dire Straits, any of those artists and bands who have been inducted for the past years were cringeworthy, especially the non-rock acts. Dire Strait has left some memorable positive contribution to music.  THEY ARE ONE OF THE BANDS WHO REALLY SHOULD BE IN THE HALL OF FAME.

Seems like the relationship between RRHoF and prog rock has not come to an extent. Just like King Crimson, they have been snubbed over and over again. They should be there with so many others. Hard thing to believe that not even a whisper about Tull in Rock Hall. It makes no real sense anymore, it’s another year again and no Jethro Tull nomination. They are the most innovative and such high moral values band in the history of Rock n Roll. Put Jethro Tull in the Rock Hall you inbred!

Formed in June 1975, they have sold over 16 million albums worldwide. They are the one who created speed metal and thrash metal, without the Motorhead, the big 4 bands would have never existed. We all need to see Motorhead to be inducted into Rock n Roll Hall of Fame. Not some cringe ass rapper or something. Lemmy is Rock n’ Roll! Way rock n’ Roll than any rock artists! Again, if Motorhead never existed then there would be NO METALLICA, NO MEGADETH, NO ANTHRAX and NO SLAYER. No one can disagree with this. Rock n’ Roll Hall of Fame is for Motorhead.

Rock n’ Roll Hall of Fame is illegitimate without the induction of Judas Priest! One of the most important bands in the metal community. Everything they did in the 70’s was “more” than anything. It’s a bold statement, but it would be for nothing if they did not earned to called “Metal Gods”. It’s pretty absurd that they aren’t in yet. No matter how really think about it, they were the very first metal band! A PURE HEAVY METAL. Everything was change for metal music because of this band. SO INDUCT THEM ALREADY! Hillbillies!

Okay, first things first. Why haven’t they induct Iron Maiden, yet? Just like any other of bands listed here. They deserve to be there! You wouldn’t know because you are a scam! They should be in by now! Their influence for Heavy Metal was supermassive! They never sold out, they have sold millions of albums and just as many t-shirts! I bet even the effing critics wore a t-shirt of Iron Maiden! They are the best metal band of all time! I guess being that huge would probably mean that they will never be inducted!