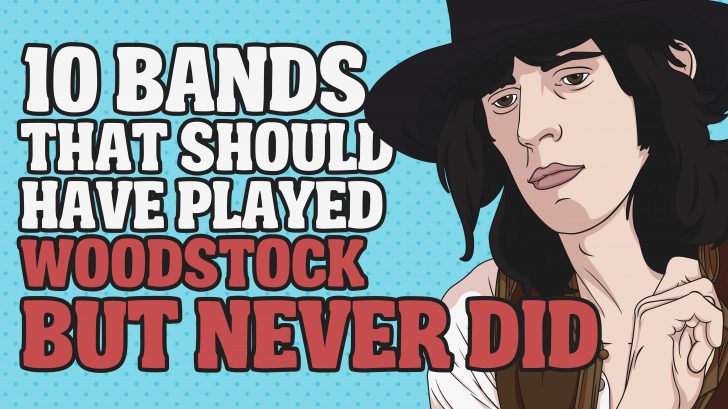 Taking a pass on Woodstock

Woodstock ’69 was one of the most historic music festivals of all time. At the time, however, not many big names in rock n’ roll ever thought of it as such. There were plenty of reasons why a handful of artists passed on the opportunity to perform at Woodstock. Some were not into the hippie culture, some do not prefer performing outdoors, some simply declined the invitation to perform, and some just had scheduling conflicts. Whatever odd excuse they had, here are some of the artists that Woodstock missed out on, or should we say,  missed out on Woodstock.

The Beatles were in discussion with their promoters about performing at Woodstock in 1969. It’s worthy of note, however, that in 1969, The Beatles was on the verge of disbanding.Two stories went around about why the Fab Four did not push through with Woodstock. One story claims that Lennon had conditions on playing with the Beatles, saying that he would not play with the band unless there was also a spot at the festival for Yoko Ono’s Plastic Ono Band. Promoters and organizers turned down his request.  Another story claims that big time Woodstock promoter Arte Kornfield did meet with Lennon and were already planning The Beatles’ appearance at the festival. However, plans did not push through as Lennon got stuck in Canada because of the difficulties of going back stateside during Nixon’s regime.

Led Zeppelin was invited to perform at Woodstock but their manager Peter Grant turned it down thinking that it would just another regular music festival and the band was about to launch their summer tour. Grant stated,

“We were asked to do Woodstock and Atlantic were very keen, and so was our U.S. promoter, Frank Barsalona. I said no because at Woodstock we’d have just been another band on the bill.”

During the Woodstock weekend, Led Zeppelin played the Asbury Park Convention Hall in New Jersey which is just south of Woodstock. Time was taken out of their highly successful tour though to attend Elvis Presley’s show at the International Hotel in Las Vegas.

The Doors were already in talks of performing at Woodstock but they canceled at the last minute. Speculation was spreading claiming that reason why The Doors canceled was because Jim Morrison did not like performing outdoors. However, guitarist Robby Krieger clarified that they turned down the invitation because they thought it would be a “second class repeat of Monterey Pop Festival”. They later regretted that decision. The Doors Drummer John Densmore did make an appearance during the festival, watching Joe Cocker’s set at the side of the stage.

Bob Dylan’s house was located very nearby the Woodstock Festival venue. He was already in the middle of negotiations to perform but said negotiations were later revealed to have never been serious. When his son was injured by a cabin door, the family flew to England during the Woodstock weekend. It as also reported that Dylan had been unimpressed about the number of hippies piling up outside his house. Two weeks later, Dylan went on to perform at the Isle of Wright Festival in Newport, England.

The British rock band passed on the invitation to perform at Woodstock after singer Ian Anderson was quoted saying that the reason was because he “didn’t want to spend [his] weekend in a field of unwashed hippies”. Later on, Anderson clarified the decision, telling SongFacts.com that

“The reason I didn’t want to play Woodstock is because I asked our manager, Terry Ellis, ‘Well, who else is going to be there?’ And he listed a large number of groups who were reputedly going to play, and that it was going to be a hippie festival, and I said, ‘Will there be lots of naked ladies? And will there be taking drugs and drinking lots of beer, and fooling around in the mud?’ Because rain was forecast. And he said, ‘Oh, yeah.’ So I said, ‘Right. I don’t want to go.’ Because I don’t like hippies, and I’m usually rather put off by naked ladies unless the time is right. Well, indeed, unless the money’s right.”

5. Frank Zappa and the Mothers of Invention

Rain and mud – that was the reason why Frank Zappa skipped performing at Woodstock. The forecast of rain and therefore a messy muddy venue turned him off as he didn’t want to play in that kind of environment. He was quoted during the Class of the 20th Century U.S. television special saying,  “A lot of mud at Woodstock…We were invited to play there, we turned it down.’

The Woodstock Festival dates were in conflict with Mick Jagger’s movie shooting schedule in Australia. Yes, lest it be forgotten, musicians were already making not-so-great movies even back in the 60s, and legendary rock star Mick Jagger is no exception to it. Jagger was playing an outlaw, starring in a film about the life of an Australian-born folk hero Ned Kelly. Jagger was filming the movie and couldn’t commit to Woodstock. Well, the movie tanked so bad that neither Mick nor the director even attended the movie premiere. He should’ve just done Woodstock.

Like majority of the bands who passed on Woodstock, The Byrds turned down their invitation to play, assuming that Woodstock would be no different from any of the other music festivals that summer. And like most bands who turned it down, they regretted their decision.  Financial reasons were also cited for declining the invitation. Bassist John York recalls,

“We were flying to a gig and Roger [McGuinn] came up to us and said that a guy was putting on a festival in upstate New York. But at that point they weren’t paying all of the bands. He asked us if we wanted to do it and we said, ‘No’. We had no idea what it was going to be. We were burned out and tired of the festival scene. […] So all of us said, ‘No, we want a rest’ and missed the best festival of all.”

In the late 1960s, the legendary group was still known as the Chicago Transit Authority and was initially already signed on to play at Woodstock. However, promoter Bill Graham had power over the band’s schedules and appearances legally bound by contract. So, Graham was able to move Chicago’s shows to Fillmore West and cancelled on Woodstock. Graham did the switch to ensure that Santana, which he also managed at the time, would take the band’s slot at the Woodstock Festival. Bassist Peter Cetera admits, “We were sort of peeved at him for pulling that one.”

Joni Mitchell wrote a song called “Woodstock” from which she derived from her disappointment for actually missing Woodstock. Two days after Woodstock Festival officially ended, Dick Cavett featured Jefferson Airplane, Joni Mitchell, and Crosby and Stills (without Nash) on his ABC prime time show. Jefferson Airplane and Crosby and Stills still managed to play at Woodstock. Joni Mitchell did not. The reason being her over-cautious manager wanted to make sure she wouldn’t miss Dick Cavett’s show so she was just made to miss Woodstock instead. Joni was also reportedly discouraged from performing at Woodstock after a nasty crowd at the Atlantic City Pop Festival made her cry.