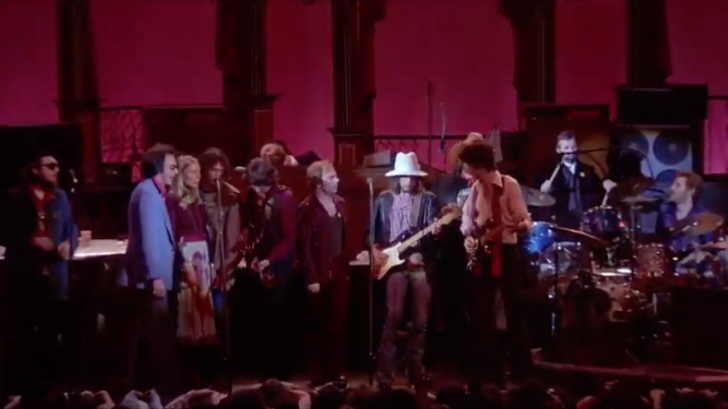 Cinema and music have always created a golden marriage of undying love- complimenting each other as they rise and fall and rise again. The art of documentary filmmaking has always been a romantic engagement of reality and art- capturing the splendor in the pain and elation of life. To base a documentary solely off of music is an act of magic. Here are the best…

The Band’s last performance was more of a celebration of life. The most prolific rock icons of the time- and of all time, were in attendance as performers. Joni Mitchell, Neil Young, Bob Dylan, Eric Clapton, Ringo Starr, Muddy Waters, The Staple Singers, and numerous others. Martin Scorcese directed what has been labeled as “the greatest rock-concert movie ever made.”

In 2008 Patti Smith’s life documentary won director, Steven Sebring the “The Excellence in Cinematography Award” at the Sundance Film Festival. The film is a raw visual of the music icon’s life as a mother, songwriter, musician, and activist. Dream of Life captures the usually private Patti Smith in her personal element.

The official trailer for D.A. Pennebaker includes the unforgettable scenes of Bob Dylan shuffling through laundry shirt cardboards with the lyrics of “Subterranean Homesick Blues” carefully drawn out on them. Pennebaker followed 23 year old Bob Dylan through the United Kingdom to film the hectic yet ironically private life of the genius songwriting musician. The documentary has been listed as #1 on countless best documentary lists, not just rockumentaries.

The Motörhead frontman is filmed by Greg Olliver and Wes Orshoski basically just being himself. Really, what is more magnetic and enthralling than being Lemmy Kilmister? The rockumentary includes interviews with all of Lemmy’s friends including Ozzy Osbourne, Lars Ulrich, Marky Ramone… and all the other badasses you assumed to be in Lemmy’s social circle.

One of the first rock film documentaries that comes to mind for most music fans is Gimme Shelter. Film visionaries Charlotte Zwerin, along with David and Albert Maysles were the masters that directed and produced the doc. The infamous collision between the Rolling Stone’s security, the Hell’s Angels, and 300,000 concert-goers was filmed in this picture. The film objectively memorializes the meeting between violence and music- the first of its kind.

Directed by Peter Clifton and Joe Massot, the legendary Led Zeppelin doc is a menagerie of concert footage, personal recordings of the band member’s lives, and animated visualizations of each bandmate’s imaginations. The film was released during the initial height of the band’s fame. It covers the Madison Square garden concerts of 1973 and had allowed fans to scope out Led Zeppelin’s personal lives for the first time.

What kind of band is Rush? This Sam Dunn and Scott McFayden documentary answers exactly that. Rush has considered themselves the “world’s most popular cult band” and the film covers that exact feeling from footage dating back to 1975 up through 2010. It covers concert footage and countless interviews with famous musicians of the rock world. Turns non-Rush fans into Rush fanatics.

“The Kids Are Alright, with 3,000 broken guitars” states Ringo Starr- the narrator of the promo for Jeff Stein’s iconic music documentary about The Who. The film covers the band’s historical footage from 1964 to 1978. This was Stein’s first film. He had started documenting the band when he was 17 and finally convinced The Who’s management to produce the accumulated footage into a film- with major success.

The Denis Sanders film is based off Elvis Presley’s Las Vegas Summer Festival at the International Hotel in 1970. There are other intimate sequences in the film including Presley recording in studio, rehearsals, and some interviews. This was one of the first glimpse’s fans had of a non-glitzed out Presley. A true rockumentary, this covered a candid Elvis Presley- personifying the rock star that was to come in the 70s.

The world’s first counter-culture event of its magnitude was filmed by Michael Wadleigh, with Martin Scorcese among its editor’s. The film is not only a music lover’s must see, it is literally a national treasure. In 1996, the documentary was selected for preservation in the U.S. National Film Registry by the Library of Congress for its accomplishment as a “culturally, historically, and aesthetically” significant film. If that means nothing to you… it has some of the most important rock footage ever recorded of Santana, Jimi Hendrix, Bob Dylan, Janis Joplin, Mountain, The Who, The Band and just about any major rock performers of the time- or of all time.