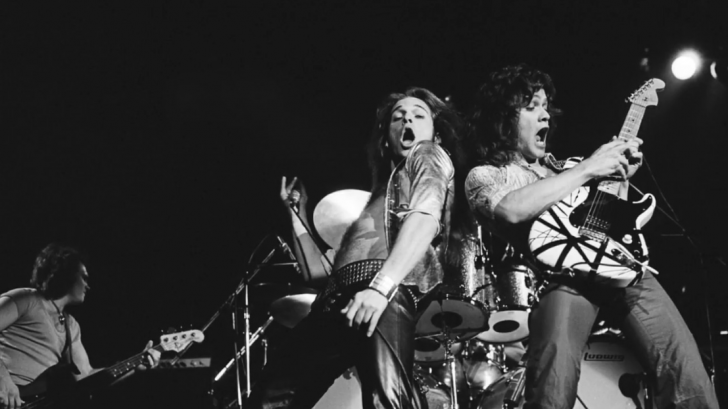 Van Halen is known for their energetic live shows and for the work of their acclaimed lead guitarist, Eddie Van Halen, who passed away on October 6, 2020. The band was inducted into the Rock and Roll Hall of Fame in 2007. We look back at the 10 Career Defining Concerts Of Van Halen from 1978, their first world tour. Most of these stories came from the Greg Renoff’s excellent book Van Halen Rising chronicles.

The group began their first national tour opening for Journey in Chicago, IL. “It was scary walking up there for the first time,” Eddie Van Halen explains in Van Halen Rising, but “after the first song people loved us” – and by the end, “everybody loved us.” The pattern repeated itself at future shows – so much so that a few weeks later, Journey allegedly began employing the time-honored tradition of sabotaging their opening act’s PA. “There was nothing I could do,” Van Halen roadie Tom Broderick remembers. “We were just really screwed and that was it.”

After finding out that the Journey show in Madison, Wisconsin didn’t have any more room, Van Halen booked a small gig at the nearby Shuffle Inn. The show was sold-out due to their incredible performance, but the group didn’t stop the party their spending the next two days thrashing a local hotel, but Steve Perry gave them advice that it’s just a waste of time, and that every time they destroy something, it’ll just wind up on their bill.

The band’s first NYC gig was a setback because “some vocal fans heckling and booing Journey’s support act,”  according to Van Halen Rising.

May 18, 1978: They Were Considered Trouble For Black Sabbath

Before being kicked off the group, Ozzy witnessed the young group as hungry fellows that would kick their asses in the following years. He recalled, “We were just too stunned to speak. We sat there, going, ‘that was incredible.’ Then, “there was a knock at the door and the best-looking man in the world (David Lee Roth) walked in and said hello.”

After having a long flight from Japan, the group had a bad experienced before putting on a show at the Texxas Music Festival: Almost all of their gear had been gone to Chicago instead. Incredibly, “we played in front of 82,000 on rented equipment and still blazed!,” raved Eddie. Roth considers this a very important show: “That was what really made us down in Texas. It was one of our very best shows, and the crowd went nuts.”

After taking a break from doing a world tour, the group headlined at the Long Beach Arena where they managed to sell 9,000 seat venue doing it all themselves.

Mick Jagger was never a fan and decided to surprise them during their soundcheck before doing a show together at New Orleans Superdome. In a rude way, Jagger banned Eddie’s custom made “bombshell” prop by saying: “Well, we won’t be needing it onstage …”

When they faced AC/DC at the Day on the Green, Eddie revealed he got nervous because AC/DC were huge! “We have to follow these motherf–ers?” Luckily, Van Halen showed them what they got. “I remember feeling that we held our own,” Eddie remembers. “I was really happy. … I didn’t think anybody could follow them.”

Eddie Van Halen earned his respect when they opened for guitar hero Ted Nugent. Acceding to Henry Rollins, who was one in the crowd, they began chanting warming up the main act, yelling “F– Van Halen!”

A performance of scarce half an hour at the Anaheim Stadium’s Summerfest, on September 23, 1978. Van Halen opened for Boston and Black Sabbath after the release of their first album and, where they did a stunt flying descending to the sky via parachutes, according to Van Halen Rising. But of course, this was just an act, the group was in their van “drinking, smoking, and pissing in a coffee can,” before switching with their stuntmen.

This was the same night where they did their stunt, the group met their future, Sammy Haggar who was on the bill as well, performing with Montrose. Sammy recalled, in a 2015 interview, “[Eddie was] shaking my hand, ‘Oh, Sammy, man. I’m a big fan, you know, Montrose, we used to play ‘Make It Last’ and ‘Rock Candy’’ and all of this stuff.” 7 years later, he would replace Roth giving them four straight top charting studio albums.