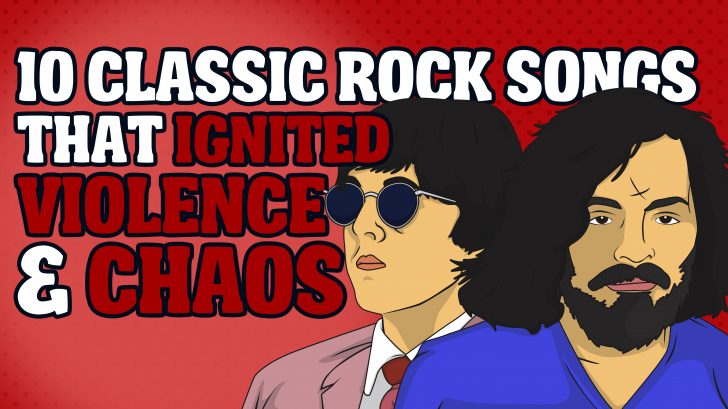 Sex, drugs, alcohol, and love are one the most terms being used to write songs. But some artists are more inspired creating chaotic music. Some are just plain awesome music but somehow had influenced people towards an aggressive behavior. Some of these songs triggered violent effects that influence people to do crimes. These classic rock songs that ignited violence and chaos may have increased the aggressive thoughts and feelings of hostility toward these violent people. These psychopaths attempted to blame music for their violence. These 10 classic rock songs that ignited violence and chaos will definitely creep you out as they rock your world out. They may also tickle your inner dark sides as you listen to them.

This was written by a singer named “Billy Roberts” in the early 60’s. He was part of the Greenwich Village Folk scene. The song was constructed between the conversations of two men. A fellow named “Joe” explaining that he caught his woman cheating on him, he was planning to kill her. After that conversation, the two people talked again and Joe was explained that he did indeed kill her woman.

Billy Roberts never released this song but he copyrighted it in 1962. Jimi Hendrix was inspired to do a record of this song after listening to it from Tim Rose, who did a cover of it and played it in a slow arrangement. Who else could have pulled it so well but Hendrix, the angry guitar of Hendrix had more violence than the song.

Steven Patrick Morrissey was inspired to write this song after reading “Beyond Belief: A Chronicle of Murder and its Detection”. The book was inspired by Moors Murder Case. Ian Brady and Myra Hindley abducted and murdered five children in and around Manchester, England. Several bodies were found buried in Saddleworth Moor, resulting the case to be known as the “Moors Murders”. The song does not actually ignite violence nor chaos but was inspired by violence and chaos.

During the time of the tragedy, Steven Patrick Morrissey was also from that area and he was at the same age as some of the victims. The relatives of the murder victims find this song as unacceptable, turning The Smiths album banned from several UK areas. Though Morrissey insisted that he did not mean to offend the relatives, and later he becomes friends with one of the victim mother, Lesley Ann Downey. The song title came from a phrase in the Gospel of Matthew, chapter 19, verse 14. “Suffer little children, and forbid them not, to come unto me: for of such is the kingdom of heaven.”

This song played a role in a murder trial and turned out as an evidence in the murder case of Justin Barber in 2002. Justin Barber was accused of killing his wife and was trialed for it. A testimony given by a forensic analyst claimed that Barber had downloaded the song an hour before the murder occurred. The song was played for the jury during the court trial and the lyrics were displayed in the courtroom, hence Justin Barber was sentenced to life in prison for first-degree murder.

The song lyrical meaning was based on a 1995 school shooting in the state of Washington. The name of the shooter was Ron Brown.

On another story, Ronald Pituch claimed that he was inspired by this song for killing his mother and an eleven-year-old boy who was just incidentally passing by riding a bicycle. Ronald Pituch murder his mother, Josephine, by striking him in the head with a barbell inside their home. After the incident, Ronald Pituch, while driving he spotted the eleven-year-old boy riding his bicycle in the neighborhood and surprisingly pulled him off his bicycle before stabbing.

On the trial, he told the judge that the song was written about his life. Though they didn’t take it seriously and he was sentenced a 50-year jail sentence.

A song was written by Paul McCartney, one of the rock number that the Beatles had offered to us. He called the song as “The most raucous rock ‘n’ roll, the dirtiest thing they’d ever done.” The song included in their album titled “The White Album”.

The title “Helter Skelter” alongside with word “Pig” was found written in blood at a crime scene during the December 1968, it was misspelled as “Healter Skelter”. Charles Mason was the one responsible for this incident, he claimed that the song was a warning for an approaching race war and he believes that the song was telling him and his followers to prepare for the things that they thought will come. He referred to this so-called war as “Helter Skelter” that caused to ignite family killing spree.

Because of this reasons, the LA District Attorney Vincent Bugliosi led the prosecution of Charles Mason and his followers.

A song in their album “Highway To Hell” that had a very different tone than the most AC/DC songs.

Richard Ramirez, a serial killer, rapist, and burglar used this song and the rest of the album as his influence for his countless crimes. He was one of the most notorious serial killers who has ever lived in the United States. He was dubbed by the media as “Night Stalker” just like the song of AC/DC “Night Prowler”. He killed at least fourteen people from April 1984 to August 1985. One of Ramirez AC/DC hats was discovered and used as an evidence. Unfortunately, the band was linked to the killer, and their song Night Prowler was rumored to be the very reason why he killed as much as many as he can before being captured. Though the fact that Richard Ramirez was actually a Satanist.

This was actually inspired by violence, Bono says that the song was inspired by “Norman Mailer’s The Executioner’s Song and Truman Capote’s In Cold Blood,” a famous book about murder.

“This was my attempt at writing a story in the mind of a killer, it is all very well to address America and the violence that is an aggressive foreign policy but to really understand that you have to get under the skin of your own darkness, the violence we all contain within us. Violence is something I know quite a bit about. I have a side of me which, in a corner, can be very violent. It’s the least attractive thing to anyone and I wanted to own up to that.” –BONO

This is why a stalker named Robert John Bardo murdered the 21-year-old American actress Rebecca Schaeffer in 1989, that the song was the very reason why he murdered the actress. The line on the song “The pistol weighed heavy,”  compelled him to commit the crime. During his trial, the song was played and Bardo was singing along to it. He was convicted and given a life sentence for first-degree murder.

An Australian man named Richard Dickinson, who was not found guilty because of insanity who happened to love Bob Dylan. He killed his mother for complaining that he was playing Dylan’s Desire album at 4 a.m.

He trampled his mother to death while listening to Bob Dylan’s `One More Cup Of Coffee’. He was then given the chance to get out of prison for one night to see Bob Dylan at his Hobart concert, he was accompanied by a prison warder and a male nurse. It was believed that letting him see the concert was a treatment for his schizophrenia.

After killing his mother Glady’s, he sprinkled coffee over her and told the police that the music had given him the strength to kill her because he thought that the music was referring to his mother as the evil character.

By Ozzy’s definition, the song was about drinking problem and the dangers it gives to a person: “Suicide is slow with liquor…”

Given the definition, it never stops a 19-year old named John McCollum for committing suicide. He shot himself in his bedroom while listening to Osbourne’s Speak of the Devil album on his headphones. His parents told that “Suicide Solution” was the encouragement for their son to commit suicide. They sued Ozzy Osbourne for it on grounds of negligence. But later then the case was dismissed in 1986. McCollum’s parents then filed an appeal that began to broaden the case and put more attention to it. “Suicide is the only way out” from “Suicide Solution” was presented as an evidence that compelled their son to commit suicide.

But the court still dismissed the case in 1988 with a ruling that the lyrics never encourage suicide, and music is protected by the first amendment.

A song first recorded by the British rock band “Spooky Tooth” for their album “Spooky Two”.

The same case with Ozzy Osbourne song Suicide Solution, this also became a controversy when an eighteen-year-old Raymond Belknap and his friend James Vance killed themselves with a shotgun after listening to this song while smoking pot and drinking alcoholic beer. Although Vance survived for another three years, after he died, his families filed a suit against Judas Priest and their record company just like the similar lawsuit against Ozzy Osbourne but were dismissed on the grounds that music was protected under the first amendment. Though the plaintiffs still managed to take the case into a different approach, saying, that the lyrics message compelled the teenagers to commit suicide.

After a 17-day trial, the case was dismissed with the judge ruling that messages on song lyrics were not put there on purpose.