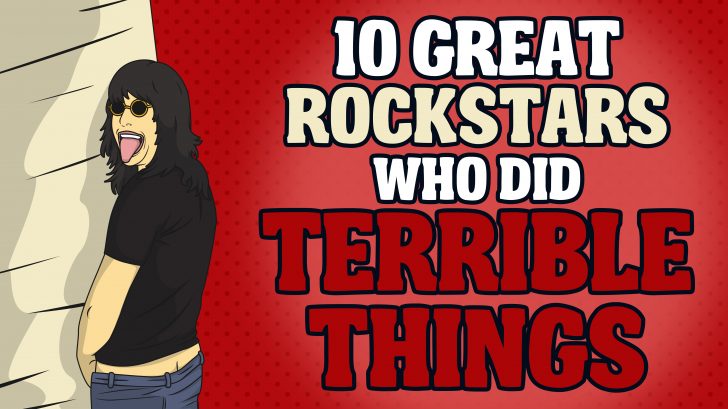 The Other Side of Fame

We’ve all done some pretty stupid things thinking we could get away with them or maybe we didn’t have time to think of our spur-of-the-moment actions. Either way, we sorely wish we could erase them from our memory. The same thing probably happened to these rockstars. But the sad part is, even without the internet and social media, their crazy antics were well documented – for some, there are mug shots as proof.

They deserve their fame obviously but apparently, talent doesn’t not translate to attitude. Just because they make good music doesn’t necessarily mean they are great people in real life too. But hey, you probably already know that. So anyway, the bad behavior ranges from tolerable to totally unacceptable.

This one is more embarrassing than terrible for both parties. On August 27, 1989, Guns ‘n Roses rhythm guitarist Izzy Stradlin was on a plane bound for Los Angeles. The bathroom was occupied and Izzy didn’t have enough patience to wait a little longer.

So what did he do? He unzipped his pants and peed on the galley in full view of the other passengers and flight attendant.

“I was drunk in the middle of this bunch of senior citizen types. I was smoking, and the stewardess came over. I told her to fuck herself. I was drinking so much I had to take a piss. The people in the bathroom … man, it seemed like I waited an hour. So I pissed in the trash can instead.” – Izzy Stradlin

He didn’t stop there, however, because he smoked cigarettes in a non-smoking area AND he verbally abused some of the stewardesses. He was welcomed by 10 policemen who arrested him. As it turned out, what he did to the flight crews was considered a federal offense.

We all know the Gallagher brothers aren’t the most lovable siblings in rock. But outside the family drama, Liam Gallagher – well, we don’t even know where to begin. It’s like ‘trouble’ is his middle name.

In 1998, he was arrested for assaulting a fan. According to the police, Liam punched, head-butted and broke the nose of a 19-year old tourist whose only fault was asking Liam for a photo.

“Even though people know what I’m about and all that, I’m starting from the bottom again. Don’t tell anyone, but I secretly love it, because I do have fond memories of them days.” – Liam Gallagher

He was also involved in a nightclub brawl and when the authorities arrived, Liam attacked a police officer and kicked him in the ribs. Aside from being arrested, he also lost several teeth in the process. So now maybe you can understand why Noel wished for him to have “the shittiest time of his life.”

What is it about rockstars and their urination mishaps? The Prince of Darkness is known for many things that’ll make your stomach churn – biting the ear off a live bat or snorting a line of ants. But perhaps one of the most well-known stories of his craziness is when he peed on the statue near The Alamo.

The Alamo’s official website says, “Heroes died here fighting for freedom.” So you know, it’s not the place to relieve yourself – it doesn’t matter if you’re dead drunk or high on drugs. But Ozzy Osbourne, dressed in Sharon’s dress by the way, urinated on the 60-foot high monument.

Ozzy was arrested for public urination and intoxication. He was also banned from performing in San Antonio for a decade. In 1992, he donated $10,000 for the Daughters of the Republic of Texas which helps preserve and protect The Alamo grounds.

Where do we even begin with Moon the Loon? He’s a great prankster but apparently, there’s no such thing as too much for the guy. Remember the time he loaded smoke bombs in his drum kit and set them off after their performance which damaged Pete Townshend’s hearing?

He also went out drinking wearing the Nazi officer uniform he used for a photoshoot and even took a trip to a Jewish neighborhood riding an open-top Mercedes.

“The first person I see is the sheriff and he’s got ‘is ‘and on ‘is gun. Sod this! And I ran, I started to leg it out the door, and I slipped on a piece of marzipan and fell flat on me face and knocked out me tooth.” – Keith Moon

He also destroyed more hotel rooms that we could count. And it was hard to escape him – even innocent people on the street became the subject of his practical jokes because he installed a speaker system to his car and made fake announcements.

He was a poet, rock legend and all-around bad boy. Whether it’s stealing a helmet and umbrella from the open window of a police car or shouting obscenities to the crowd at a concert or interfering with the crew and attendants mid-flight, it seemed like he didn’t have an ‘off’ button or he just didn’t know when to stop.

He also tried to start a riot – he’s had a few run-ins with the law and has been arrested several times.

“It’s … how can you stand the anchorage of a chair and be bombarded with all this intense rhythm and not want to express it physically in movement? I like people to be free, not chained.” – Jim Morrison

But perhaps the worst of it all was when he allegedly exposed himself in front of an audience in Miami. Of course it’s a given that he was drunk at the time. Some even said he simulated oral sex on guitarist Robbie Krieger.

When he’s not being a rockstar, Sebastian Bach is also a part-time trouble-maker. Back in 2010, he was involved in a pub brawl in Peterborough, Ontario when he heckled the club’s musician along with his friends and even threw ice cubes at the poor guy. When his group was asked to leave, Sebastian tried taking his glass of wine with him but after the staff told him he couldn’t take it, he smashed it at the front door.

And he allegedly bit the pub owner’s hand too.

“It’s like a lawn. Just fucking leave it. Let it go. Do you ever see bums with short hair? No, they’ve all got kick-ass long fucking hair, lying in the street. Fucking let it be a bum.” – Sebastian Bach talking about his glorious hair

He gets wild on stage too. One time, he threw a bottle into the crowd hitting and thereby breaking the nose of a female fan.

Axl Rose is like time bomb, he can explode anytime. He’s a great frontman and a talented vocalist, we’re all well aware of that, but he’s also highly unpredictable especially on stage. At least, he was back in the day – he’s cool and nice nowadays.

And the sad part is, aside from Slash and the rest of his bandmates, everyone around him gets a taste of his sudden flare of anger even fans. He once got pissed off because someone from the audience was wearing a SLASH t-shirt and he also stopped a show after seeing a fan with a camera so jumped into the crowd and attacked him. After getting back to the stage, he announced “Thanks for the lame-ass security – I’m going home.” Then he literally dropped the mic and went home.

“I know it’s a love-hate thing. There are people that are big fans and people that really hate me.” – Axl Rose

He’s got a reputation of being a hothead and he’s had several beefs with other rockstars including Nirvana’s Kurt Cobain and his wife Courtney Love.

Back in 2010, a week after announcing his sobriety and saying that there were “other things in life than just drugs and alcohol,” Mötley Crüe singer Vince Neil was arrested on DUI charges. But that’s not the reason why he made it to this list.

Two things – first, he was drunk driving too back in 1984 and he ended up crashing the vehicle and therefore killing one of the passengers – Hanoi Rocks’ Razzle. He was charged with DUI and vehicular manslaughter.

“As far as Vince Neil, I have nothing to say. It was an accident. What happened happened, and it can’t be changed. Everybody suffered from the whole thing.” – Hanoi Rocks singer Michael Monroe

Second, in 2016, Vince Neil made it to the headlines once more after a video of him in the middle of a heated argument with actor Nicolas Cage surfaced. This was after Vince allegedly attacked a woman in a restaurant (security footage showed him pulling her to the ground by her hair) who merely asked for Cage’s autograph.

When Marilyn Manson said “I am the God of Fuck!”, we knew he was going to be trouble. He always does things which are supposed to be shocking, bizarre and scandalous. Aside from being an ordained Satanist, he was also arrested after performing on stage wearing an underwear with a hole and urinating on the crowd.

One time, he invited a deaf groupie to their studio, told her to strip and then peed on her.

“My point on Earth is chaos. I’m the third act of every movie you’ve ever seen. I’m the part where it rains and the part where the person you don’t want to die dies.” – Marilyn Manson

And perhaps the worst of all his antics was when he wore a thong and pantyhose then proceeded to gyrate and rub his junk on a security guard’s head. He was charged with battery and sexual assault. Think of how traumatizing that was to the guard.

Jimmy Page is a guitar god and his axeslinging skills remain unmatched. But being part of one of the greatest rock bands of all time still doesn’t excuse some terrible behavior. No, he didn’t act diva-ish or yelled at fans but he did date a 14-year old girl Lori Maddox while he was in Led Zeppelin. That was actually a pretty nice way of saying it because he practically kidnapped her.

She was a groupie and Page fancied her so he asked a roadie to bring her to his L.A. Hyatt House suite.

“[He was] wearing this hat over his eyes and holding a cane. He looked just like a gangster. It was magnificent.” – Lori Maddox

Their affair lasted for years and Page somehow got away with his relationship with an underage girl. But of course, he kept her behind closed doors because obviously, it was illegal and he could face jail time. He dumped her eventually because you know, that’s what rockstars always do.