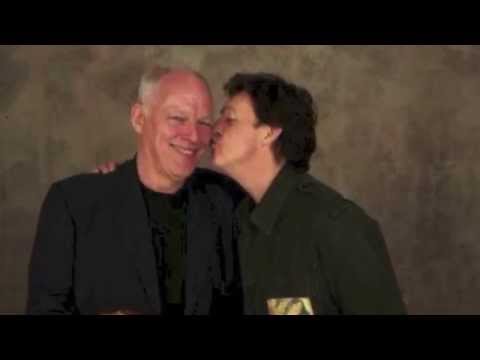 David Gilmour is best known for his Pink Floyd career but his wonderful guitar has been featured on countless songs by many other artists, from studio records to live performances. Below are the 10 Greatest David Gilmour Collaborations Of All-Time:

The rest of the songs until completing the 18 that make up this compilation, are part of the songbook for “Barrett” (1970), an album that Rick Wright and Gilmour produced for their former partner out of friendship, out of guilt for having thrown him out of the group or simply To remember the old days The first of the tracks is ‘Baby Lemonade’, a paradigmatic example of the sound of this album, much more elaborate than that of “The madcap laughs”, which is easier to hear but loses spontaneity compared to its predecessor. “Baby Lemonade” mixes Barrett’s blues roots with his psychedelic bet for the first Floyd singles. ‘Dominoes’ delves into the structures that mix pop with lysergic sounds and even hints at jazz. ‘Gigolo aunt’ and ‘Efervescent elephant’ are two of the best songs of Barrett’s brief solo career, especially the second, with its nursery rhymes.

After jamming with the band called Unicorn during a friend’s wedding, Pink Floyd asked them to produce an album for them in their new studio. In there, they worked with David Gilmour.

Of all Gilmour’s collaborations, one of the most outstanding is the one that unites him with Roy Harper, an excellent English singer-songwriter. Roy Harper asked Gilmour to record The Game with him, the song that opened his album, HQ.

For his own solo album in 1985, Pete Townshend featured Gilmour’s excellent guitar for the entire album, mainly his 1984 red Fender Stratocaster ’57 reissue.

In 1985, Gilmour appeared on Ferry’s album, “Boys and Girls”. He also collaborated with the former Roxy Music singer on the single “Is Your Love Strong Enough” (featured on the soundtrack to Ridley Scott’s “Legend”) and at the “Live Aid” concert in London.

Fortunately, the friendship between the two figures has remained intact over the years and they have collaborated on several occasions. For example, Gilmour did backing vocals for her on “Pull Out the Pin” and played guitar on “Love and Anger” and “Rocket’s Tail.”

Two masters of the minimalist guitar united for a common cause, with the added benefit of blues vocals from the incomparable B.B. King. What more could you want?

Paul maintained contact with Pink Floyd in the seventies. In fact, they crossed paths on Abbey Road several times when they recorded their respective albums. David Gilmour began a friendship with McCartney that fortunately moved to the musical plane on several occasions. The first one happened with Wings for the Rockestra Theme project, the song of a super band that won the Grammy Award for it. In the eighties, Gilmour contributed the unforgettable solo of No More Lonely Nights, the last record for the album Give My Regards To Broad Street. Another contribution from the Floydian guitar is in I Love This House, the track that we learned from the Oobu Joobu shipment. Gilmour was another of the guest musicians for Flowers In The Dirt and there you can see his collaboration in We Got Married in the most Pink Floyd passage of Macca’s solo career. The McCartney / Gilmour partnership continued in 1999 when Paul summoned him for Run Devil Run, his second Rock N Roll covers album. There we saw how rocker Gilmour could be. We enjoyed it on the album and at the concert they gave at The Cavern in Liverpool to welcome the new millennium.

Exactly 15 years ago, two of the most influential musicians of the 20th century shared the stage in London: David Bowie sang with David Gilmour at the Royal Albert Hall.

On May 29, 2006, the White Duke was one of the special guests for the former Pink Floyd show, and performed two songs by the band: “Arnold Layne”, the theme of his early years, and the classic from The Wall ” Comfortably Numb “. The collaboration was recorded on the Live Disc and DVD Remember That Night.