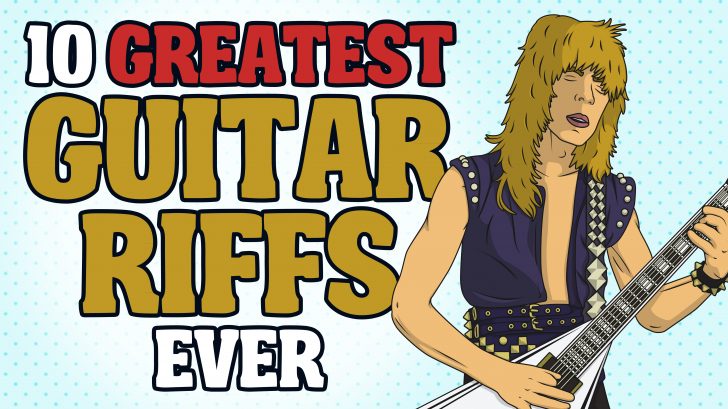 Every guitarist wants to come up with that one great guitar riff that’ll change their life forever. Was that too cheesy? Okay, let’s try again. Once in a while, rock gods look down upon us and recognize our need for greatness to make life more exciting. Yeah, that’s worse.

Anyway, what we’re trying to say is we cannot overstate the importance of an unforgettable and mind-blowing riff. Even legendary musicians most likely just come up with only one during their entire career. And more often than not, that’s all you need – that ‘one great riff’ to take your song to another level and basically secure you a spot in the rock ‘n roll pantheon.

Does it have to be difficult and complicated? Not necessarily. Some are simple enough for beginners to learn. So go and grab your guitar and see how many of these you can play:

Slash gets a lot of hate for allegedly for being overrated and not having enough talent to compete with other legendary guitarists. Okay all you Debbie downers, we see your point. And while we’re well aware that Slash isn’t exactly the greatest axeslinger out there, it’s hard to discount the “wow” factor in his riff for “Sweet Child O’ Mine.”

That one’s not just easily recognizable but when you actually try to play it, you’ll realize it’s harder than it looks.

“You know that guitar lick Slash does at the beginning? It was kinda like a joke because we thought, ‘What is this song? It’s gonna be nothing, it’ll be filler on the record.’ And except that vocal-wise, it’s very sweet and sincere, Slash was just fuckin’ around when he first wrote that lick.” – Duff McKagan

Bless you Slash for coming up with this “circus” melody. Almost three decades later, guitarists are still attempting to perfect it – all the while looking cool and chill ala Slash.

This packs a lot of punch. You know why? Because RANDY RHOADS. His axeslinging skills are legendary for a reason and this riff is one of the solid proofs that he blew everyone out of the water easily. He’s revolutionary and innovative. And it showed in “Diary of a Madman.”

It’s impressive and astonishing. Ozzy Osbourne was spot on when he said that Randy Rhoads “was a master of his art.”

“When we were working on that one, Randy came to me, ‘I’m not happy with the guitars,’ so I said to work on it until you’re happy. He’s in there for a couple of days and one day comes out with this big, shit-eating grin and goes, ‘I think I’ve got it.’ And when he played it, the hair on the back of my fucking neck stood up.” – Ozzy Osbourne

Randy was clearly a perfectionist and a musical genius. His riff for “Diary of a Madman” was one of his finest pieces. He is greatly missed.

Sometimes we wonder if David Gilmour was put on this earth to make every other guitarist feel mediocre. No matter how long his solo is, it’s never enough. We can argue about his use of special effects and all that but really now, it all boils down to the man, his talent and his fingers.

The riff in “Comfortably Numb” is nothing short of spectacular.

“I banged out five or six solos. From there I just followed my usual procedure, which is to listen back to each solo and make a chart, noting which bits are good. Then, by following the chart, I create one great composite solo by whipping one fader up, then another fader, jumping from phrase to phrase until everything flows together. That’s the way we did it on ‘Comfortably Numb.’” – David Gilmour

Who would have thought that this epic masterpiece was the product of the tension between David and Roger Waters? With two guitar solos, it’s easy to get overwhelmed by David’s greatness. His skill on the guitar remains unrivaled.

This riff is just out of this world. And if anything, this convinced us that Eric Clapton was from another dimension entirely. But it’s not just him. It was Duane Allman who came up with it. It’s difficult to recreate but with enough patience and practice, you might just be able to pull it off – we don’t guarantee it will be the same because come on, it’s Eric Clapton and Duane Allman people. They’re gods even among legends.

Don’t worry though, even the Guitar God himself admits it’s not the easiest song to play.

“’Layla’ is a difficult one, because it’s a difficult song to perform live. You have to have a good complement of musicians to get all of the ingredients going. Sometimes, my own music can be like that. When it’s served its purpose to being good music, I don’t associate myself with it any more. It’s like someone else. It’s easy to do those songs then.” – Eric Clapton

The producer Tom Dowd claims the musical masterpiece is “definitely equal parts Eric and Duane.” And when you have two massively talented axeslingers, the result is just astonishing.

Jimmy Page’s epic work in “Whole Lotta Love” was voted the best guitar riff of all time by BBC Radio 2 listeners. Besides, you only need around three seconds into the song before you recognize it. And you know what, the only thing we don’t like about the track is how short it is. We don’t mind listening to Jimmy Page shred for twenty minutes more.

“I wanted a riff that really moved, that people would really get, and would bring a smile to their faces, but when I played it with the band, it really went into overdrive. There was this intent to have this riff and the movement of it, so it was menacing as well as quite sort of caressing.” – Jimmy Page

Even if you’re not a huge fan of Led Zeppelin, there’s no way you can not like this. It’s been sampled numerous times and even with an extensive catalog full of musical gems, this remains a classic. It’s unarguably one of Page’s greatest works.

We’d be lying if we say we didn’t at least attempt to learn how to play this particular riff. Besides, we’re going to bet this is the first song that comes to mind whenever we think “greatest riff.” We have Richie Blackmore to thank for giving us this classic.

If anything, this proves the riffs don’t have to be complex to be great. Its appeal lies in its simplicity. Joe Satriani referred to it as “elegantly simple.”

“The riff is done in fourths and fifths – a medieval modal scale. It makes it appear more dark and foreboding. Not like today’s pop music thirds.” – Richie Blackmore

Even if you’re starting out with guitar playing, you can learn this one – even kids can too. You don’t have to be a virtuoso like Richie to nail it. It’s the work of a genius and that is evident in the riffs’ sheer brilliance.

He’s a musical genius, hands-down. More than a great performer, he’s also a prolific songwriter. He deserves an entire list of his finest musical moments and this is clearly one of them. At his peak, he was unstoppable. The lyrics may be controversial (some are calling it a murder ballad) but what takes away our attention from the words are the riffs.

“If I was ever going to teach a master class to young guitarists, the first thing I would play them is the first minute of Neil Young’s original “Down by the River” solo. It’s one note, but it’s so melodic, and it just snarls with attitude and anger. It’s like he desperately wants to connect.” – Trey Anastasio

Good job, Neil. No matter what the actual meaning is behind the song, the fact remains that the guitar parts here are something else. Neil sure knows how to blow us away with his compositions.

We don’t normally include two works from one band in our listicles but man, this is Randy Rhoads we’re talking about – yep, the guy who we think single-handedly changed rock music. We’re more than willing to make an exception.

His work with Ozzy Osbourne is nothing short of outstanding. It’s a universal fact that no one can play half as good as him. And as for “Crazy Train,” it’s easily one of the most distinctive and recognizable riffs in heavy metal.

“One of the reasons it’s so brilliant is it utilizes every single note in the minor scale. I think this is a good lesson in seeing the power of scales and how they can help you memorize riffs.” – YouTuber Sean Daniel

Guitarists probably wish they wrote it. But would you believe, it all began with Randy Rhoads messing around? He was gone too soon but he left us with this legacy – an epic masterpiece at that.

No “greatest riff” list would be complete without something from the guitar god who set the bar incredibly high for every other axeslinger. Like Randy Rhoads, he was gone too soon but he left a rich catalog for us to enjoy decades after recording them.

“Voodoo Child (Slight Return)” was voted as the ‘best guitar riff of all time’ in a poll by Music Radar. But even without that, there’s still no denying that this song showcased the virtuoso’s mad axeslinging skills.

“[S]omeone was filming when we started doing [Voodoo Child]. We did that about three times because they wanted to film us in the studio, to make us—’Make it look like you’re recording, boys’—one of them scenes, you know, so, ‘OK, let’s play this in E, a-one, a-two, a-three’, and then we went into ‘Voodoo Child’.” – Jimi Hendrix

Hendrix was a wah-wah pedal master thus, it was no surprise that the song is widely known for its distinctive wah-wah opening. The riff was simple but explosive. Joe Satriani referred to the iconic track as “the holy grail of guitar expression and technique.”

“Johnny B. Goode” essentially gave birth to several other classic rock hits. And it features one of the most recognizable riffs in rock ‘n roll. More than Chuck Berry’s guitar work in this song, it’s also known for being featured in the film Back to the Future.

Several other musicians covered the track but we can all agree that those versions pale in comparison to the original. Chuck Berry knew how to weave a spell over his audience.

“”Johnny B. Goode” is the supreme example of Berry’s poetry in motion. The rhythm section rolls with freight-train momentum, while Berry’s stabbing, single-note lick in the chorus sounds, as he put it, “like a-ringin’ a bell” – a perfect description of how rock & roll guitar can make you feel on top of the world.” – The Rolling Stone Magazine

His music lives on thanks to this monster hit.