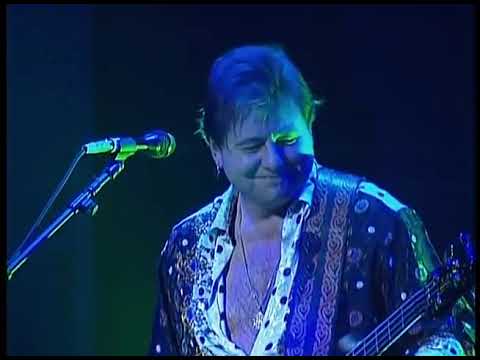 The term supergroup appeared in the mid-sixties when renowned artists got together to make recordings in the same studio. Generally, supergroups are not created as the main alternative, since they are generally parallel projects that do not have a long duration and do not publish more than two or three albums, although there are great exceptions. The idea is exciting for the public, to see the main musicians meet other artists of the same caliber, a gathering of stars where they have the luxury of getting away from the musical style that made them recognized or simply to experiment with others. Below are the 10 Greatest Hits From 10 Supergroups Of Rock n’ Roll:

The last great attempt by a supergroup that sadly did not work out as we expected. Dave Grohl has already returned with Foo Fighters and the same has happened with Johs Homme from Queens of the Stone Age. John Paul Jones can’t repeat history like Led Zeppelin, that’s impossible. Despite everything and their null participation in the world of music, they are a great attempt at a rock “supergroup”. The idea in the end is not to see if the music worked, but rather to bring together legends of the genre in the same band. New Fang was their hit song from their album “Them Crooked Vultures” released in 2009.

For many, the best guitarist of our time is Tom Morello and if we add to that the great voice of Chris Cornell we have two good condiments to form a great group. The first album is for many a masterpiece. Like A Stone was the hit song from their self-titled album.

It all started in 2002, when Slash, Duff Mckagan and Matt Sorum, all former members of Guns N ‘Roses, played together for a charity event in favor of Randy Castillo, and realizing that they could start a great career again, they begin to find other artists to complete a new band. After incorporating guitarist Dave Kushner, the band was looking for a top-notch vocalist, Scott Weiland of Stone Temple Pilots volunteered, but the quartet did not want to generate controversy as Scott was in full swing with his band. Shortly after, STP separates due to personal conflicts and Weiland returns to offer himself to the supergroup, he is accepted. In 2004 Velvet Revolver released “Contraband”, the first album, very successful: it debuted in the first position on the Billboard chart in the United States and also appeared on the charts in Australia and England, the impressive song “Slither” was released. which dominated the charts that year and won the Grammy in 2005 for Best Hard Rock Performance. “Fall To Pieces” is another of the most representative songs of the band.

Traveling Wilburys – End Of The Line

In 1988 after finishing his work “Cloud Nine” George Harrison (ex Beatle) commented that he had intentions to start a new project where he wanted to play with his friends. Harrison started working with Jeff Lynne (Electric Light Orchestra) for a B-side of his most recent album, more precisely for the song “This is love”. At that time they began conversations with the renowned musicians Roy Orbison and Tom Petty, and, in the absence of a recording studio, they contacted Bob Dylan and in his studio they made the recording. They composed in just five hours and recorded under all voices “Handle with care”, seeing the quality of the song and how the musical chemistry between them flowed, they ended up meeting and recording a full length under the name Traveling Wilburys Vol. 1. The debut album sold more than two million copies in the first six months and received three times platinum status. It was well received by critics especially the song “End Of The Line” in general and was a return to success for Orbison, Lynne and Dylan, as Petty and Harrison had recent successes with their side works.

Asia – Heat Of The Moment

Arisen in 1981, it was a project that was preceded by several formations before achieving stability and world fame. After a couple of failed attempts, the supergroup finally got off the ground with Yes ‘Seteve Howe, King Crimson’s John Wetton and The Buggles’ Geoff Downes, while their headline projects were stalled. The following year they released their debut album called “Asia”, highly criticized by the group’s most conservative fans but a commercial success. Songs like “Heat Of The Moment” (perhaps the most successful and remembered song), “Only time will tell” and “Sole survivor” are released from them. The album spent 9 weeks at the top of the Billboard 200 and went platinum four times. In the United Kingdom it achieved the gold record, although the popularity was not as overwhelming as in other parts of the world.

Paul Rodgers has always been the best rock singer, many claim. Together with Simon Kirke Free, he invented the new heavy, with the help of the late Paul Kossof. But joining forces with Mott The Hoople guitarist Mick Ralph and Boz Burrell who had been on King Crimson was huge. Shooting Star was their hit song from their 1975 album “Straight Shooter.”.

The group appears in the late sixties, where Keith Emerson (The Nice), Greg Lake (King Crimson) and Carl Palmer (Atomic Rooster) come together taking advantage of the progressive revolution that was invading the world, especially Great Britain. With their fusion of Jazz, Rock and classical music, their electricity and power on stage, they quickly became something to talk about. The first self-titled album from 1970 is not very commercially successful, but it is a great showcase to bring them closer to the public. The following year they published “Tarkus” which brings them closer to the consolidation that would finally come with “Trilogy”, where they are much more mature and impose their own characteristic sound. In 1973 the album “Brain Salad Sugery” continues with the great reception of the critics and the followers of the group. After rumors and constant internal friction in the group, they release a couple of studio albums where the wear and tear begins to be noticed and the decline begins. A short time later they split up and presented several years of ups and downs, during the eighties they tried to regroup them for some presentations and in the nineties they re-released new studio material with moderate success.

Eric Clapton had been encouraged by the term and he did it again with Stevie Winwood (Spencer Davies and Traffic), Ginger Baker and not to forget the great Rick Grestch of Family. A fleeting and incredible band that only published a single album in August 1969. Enough if we take into account the level of members it had.

The first “supergroup” with members from both sides of the Atlantic. But the mix of The Byrds, Buffalo Springffield and Hollies was explosive. The voices of the angels of folk-rock that knew how to last in time and leave seeds in other groups that, although it seems incredible to this day, reap fruit. Alabama Shakes would have no place in life had it not grown up with Crosby, Stills, Nash & Young.

Cream – Sunshine Of Your Love

By 1966, Eric Clapton was considered one of the best guitarists in the UK blues scene and had been remembered for his time at The Yardbirds. After conversations with drummer Ginger Baker (The Graham Bond Organization), Clapton stated that he would like to work with the percussionist for his overwhelming style. The deal was closed with Eric’s request to bring Jack Bruce (bassist The Graham Bond Organization) into the group, which happened quickly. Baker and Bruce had already had a long history of fighting in their old band and it was cause to care, despite that, both agreed to leave their differences behind for the new project. The band debuted in July ’66 at a blues festival and later they made some presentations in different clubs, not having their own songs yet, they played several covers. Jimmi Hendrix, a declared admirer of Clapton’s work, asked them to let him join in on some jams, both of whom were pioneers in using the Wah-Wah stompbox. In that same year they released their first album “Fresh Cream” which reached the sixth position in the United Kingdom and managed to settle on the charts on the other side of the Atlantic. In 1967, after performing their first concert in the United States, they released the album “Disraeli Gears”, reaching the fifth position in the United Kingdom and the fourth position in the United States, achieving consolidation in the main countries and different lists of the world. In 1968 they released “Wheels of Fire”, a double album that marked their first number one on the charts, reached the top in the United States and Canada, while it remained in third place in the United Kingdom.