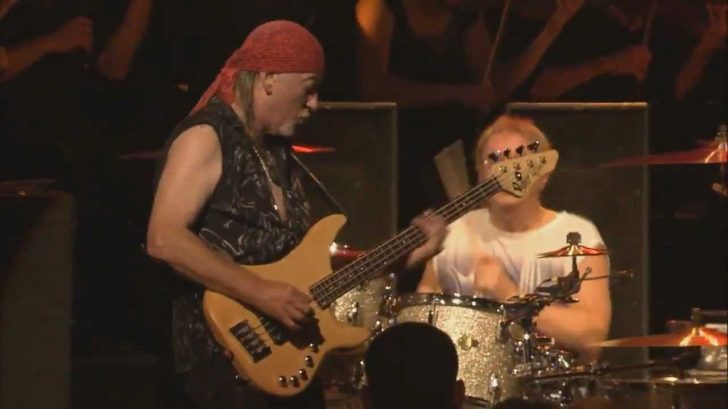 best known as the bassist for hard rock bands Deep Purple and Rainbow. As a member of Deep Purple, Glover was inducted into the Rock and Roll Hall of Fame in April 2016 with his contributions to the band as a monstrous bassist, we look at the 10 Greatest Songs By Deep Purple’s Roger Glover:

This song has incredible Glover riffs. This song was co-written by Ritchie Blackmore and Cozy Powell and was included in the album Down to Earth released by Rainbow in 1979.

Definitely one of Glover’s finest as he showcased his brilliant bass playing on this track. The song was co-written by him as a Deep Purple track on the album, Abandon released in 1998.

In ‘Maybe I’m A Leo’ they bring out their bluesier side by taking too much advantage of a slightly shocking by Glover’s riff. This song was co-written by him along with Ritchie Blackmore and was included in the album, Machine Head’ released in 1972.

Written by Joe Lynn Turner for Rainbow’s album, Difficult to Cure released in 1981. “No Release” continues down the path of hard rock, this time hand in hand with soul and blues bass riffs by Glover.

That darkness, in another way, is also noticeable in “Weirdistan”, which generally shows the more progressive wave of the group and with Glover hitting basslines, something that is very present in the album Now What?! released in 2013, reaching those orchestral arrangements that fuse classical music with rock, in which Deep Purple are pioneers.

Perfect Strangers released on the album of the same name in 1985, here we find the machinery of the Paice-Glover duo was still in perfect magazine condition. Jon Lord was still hitting the keys like no one else even though the classic Hammond sound was fading in favor of electronic keyboards.

The album Machine Head begins with “Highway Star”, an excellent song that contains a brilliant rhythmic structure, in which Lord and Paice compliment each other perfectly, without forgetting a great contribution from Blackmore on guitar and an impeccable work by Glover as he provides the high-octane fuel for Gillan’s gritty growl.

The first track on the album Who Do We Think We Are released in 1973 is “Woman from Tokyo”, the classic image of the album, which is nothing more than a Hardrock cut – in short, the magic formula Blackmore & Lord was still paying off, before the comings and goings of the first, and with Glover’s help and impeccable basslines.

The brilliance of “Hard Lovin ‘Man”, with a great Gillan and some great Blackmore solos, and the sense of groove that Paice and Glover provides are other fragments of the truly exceptional album Deep Purple in Rock released in 1970.

Smoke on the Water

Deep Purple released the wonderful album Machine Head in 1972 which would reach number five on the American charts, also reflecting a sublime harmony between all the members of the band and containing one of the most recognized songs of the band, the brilliant “Smoke On The Water.” The guitar riffs of Blackmore became immortal, and Glover’s grease basslines were locomotive.