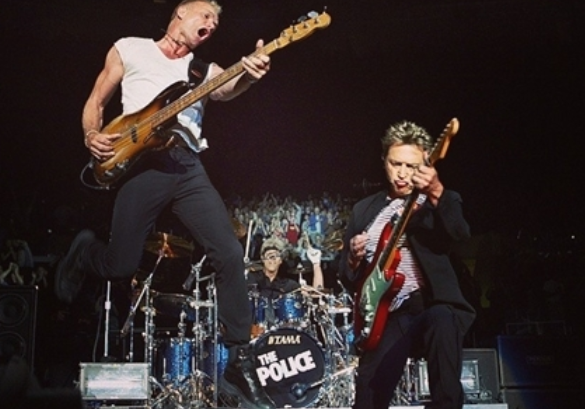 Led by Gordon Matthew Sumner, better known as Sting (a name derived from a yellow and black striped rugby jersey, like a wasp, that he always wore in his youth), The Police were one of the most commercially successful British teams in the United States. The trio, in addition to singer and bassist Sting (born October 2, 1951, in Tyne and Wear), was originally composed of drummer Stewart Copeland (born July 16, 1952, in the Egyptian town of Alexandria) and guitarist Henry Padovani, who was replaced by the experienced Andy Summers (born December 31, 1942, in Lancashire), a musician who already had a long career in rock, having gone through bands such as Animals or Zoot Money.

Sting, from his childhood he combined school with his love of music, particularly jazz. After completing his teaching studies, he worked as a primary and secondary teacher in several Catholic schools. While Steward when he and his family returned to the United States from England, he entered the University of Berkeley, in California. There he began to play in some groups, to end up recording with the progressive rock band Curved Air, of which his brother Miles was the manager. And Andy Summers formed a group with a friend and, encouraged by the good acceptance they had, they traveled to London in 1963, where they created Zoot Money’s Big Roll Band and performed at The Flamingo. In 1967, they renamed the group Dantalion’s Chariot.
In 1969 Andy Summers plays with Eric Burdon and The Animals before joining the Police.

The Police Break Up At The Peak Of Their Career

The Police disbanded in 1984 when it was at its peak, and it had become the most important group of the 80s. Then each of its members began their particular solo career. The most brilliant was that of Sting, both record and film, which has established him as one of the great musicians in Rock History.

It Was Ego That Broke Them

There was never an official statement or statements to legitimize this break. It was just the normal result of relationships hanging by a thread, despite the group’s worldwide success that turned them into a money-making machine. The wheel was loose and no one dared to stop it.

The Police Was Never Founded By Sting

Unlike what everyone believes, The Police was not created by Sting, but by another member of the band: Stewart Copeland. In 1977, Mike Howlett (bass and vocals), Sting (bass and vocals), Stewart Copeland (drums), and Andy Summers (guitar) formed the band Strontium 90. The group’s first album was called Strontium 90: Police Academy. Hence the name of the group that would later lead him to fame: The Police.

Copeland’s Dad Was A CIA Agent

The young Stewart didn’t know exactly how his father, who had been a trumpeter and had worked with artists of the caliber of Glenn Miller, earned his bread, but when he found out, all the pieces fell into place. They traveled so much because their father had a very particular profession: he was nothing less than a spy for the CIA.

His mother died at 53 and his father at 57. However, he was unable to attend the funeral of either of his parents when they died in the late eighties, as he was on tour. Right at the height of the band success.

In October 2003, Sting published his autobiography titled Broken music, where he recounts particular passages from his childhood that remain, according to his own words, intensely in his memory, to understand how the child he was has become the adult he is today.

Roxanne Was Supposed To Be A Flop

If you listen well to the beginning of this song, you will be able to hear a beat on the piano keys and a laugh. It so happens that on the day of the recording, Sting accidentally sat on top of the piano keys and the microphone managed to pick up the provoked sound (the random notes and his laughter). The band’s guitarist, Andy Summers devised the guitar arrangement to be as unique as possible. He wanted that just by listening to the first few seconds of the song, people would be able to recognize it immediately.

The Police got together in 1986 (after splitting up) to record updated versions of their old songs. The reunion revived the rivalries that caused their separation and this was the only song they managed to re-record. It was titled “Don’t Stand So Close To Me ’86.” Back in 1985, Sting worked with the Dire Straits on the song “Money For Nothing.” The chorus of that song (“I want my MTV”) has the same melody as that of “Don´t Stand So Close To Me”. Sting, a former teacher, penned the song, which centered on a relationship between a teacher and one of his students.

“How I kept my hands off them I don’t know,” he said. To make it clear, he has stressed over the years that he never acted inappropriately with any of his students, telling Q in the ’90s that the song took advantage of his role as a rock star: “You have to remember we were blond bombshells at the time and most of our fans were young girls, so I started role playing a bit.”

Although music is his passion, he has participated in more than a dozen films. From his film debut appearance in Quadrophenia, he appeared in several films during the 80s, such as Dune, The Promised One, or Stormy Monday. From the end of the 80s, he reflected and said: “this is not my thing”, although it has continued to appear anecdotally. His wife Trudie has also been involved in the film as an actress and producer.