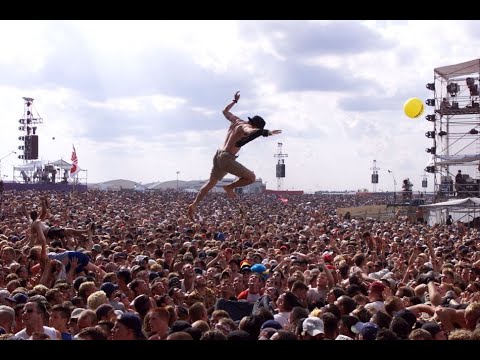 Three days of love and music, in homage to the historic festival of the sixties, was the premise of Woodstock 99.

Although the organization took note of the security problems of the 1994 edition, in which attendees were allowed to enter alcohol and other substances without problems due to the fact that the number of guards was not enough and the only physical barrier was a wire fence, the difficulties were noted from the first day.

Logistical problems in the provision of water and basic services were the breeding ground for the outbreak of bad behavior from a part of the public.

A large venue, but it seemed more like a relic of the cold war than a place conditioned to receive thousands of people. Although the publicity for the event referred to the spirit of the hippie era, early 90s youth showed that, above all, they were demanding consumers.

If in 1969, Jimi Hendrix allowed himself to make an electric version of the US anthem, which went down in history, thirty years later his shadow was far from appearing in Woodstock. In any case, a national symbol of the northern country had its moment at the festival, although not precisely to honor it. It happened during the Rage Against the Machine performance. In fact, the atmosphere was already heated. The Limp Bizkit performance, which occurred just before, left pieces of wood torn from the surrounding fences (on which people “surfed”), a rape complaint, and the organization’s warning to the public to respect each other, at the risk of canceling the star numbers of the night. Things calmed down a bit, and the quartet of Zack de la Rocha, Brad Wilk, Tim Commerford, and Tom Morello, came out on stage.

Woodstock 99 ‘took place in July, during the northern hemisphere summer. The temperatures in the three days of concerts reached 37ºC, for this reason, a large number of people gathered at Griffiss Air Base, had to endure the burning asphalt, dehydration, and dense dry air. In addition, the place offered little vegetation. Only a few abandoned hangars provided shade for thirsty and sweaty teenagers. To add insult to injury, the two main stages were far apart, forcing audiences to take pitiful walks in the scorching summer sun.

#5 – Water Supply and The Cost

It soon became clear that the water supply was insufficient. According to information published by The Baltimore Sun, during the days of the festival, around 700 people were treated in the infirmary for heat exhaustion and dehydration. Chronicles of the time note that the organization warned attendees to bring their own supplies. But what the respectable did not expect was that to buy the water they had to pay four dollars a bottle, a price considered excessive. A slice of pizza, for example, costs $ 12. It is true that there was a source to stock up at no cost, but the lines, according to the chronicles, were as long as those seen today in the subway to enter the platform at peak hours. Frustration soon gripped the audience and musicians were their targets.

#4 – Thousands of Bottles Thrown onto the Stage

With his show scheduled at 1:00 p.m. on Saturday 24, while the sun burned the audience’s backs, Kid Rock took note of the situation. Towards the end of his concert, he said he wanted to see “everything fly through the damn air.” Within seconds, thousands of bottles were furiously thrown onto the stage. Rock received the volley between ecstatic and surprised. People did not stop. Not even with the exit of the “Cowboy” scene.

#3 – Others were Less Fortunate.

During the presentation of The Offspring, on Friday the 23rd, the public began to throw the bottles at each other. And soon they reached the stage. One of them hit hard on the face of vocalist Dexter Holland, while he sang the song “Have you ever”. The impact moved his sunglasses, but he continued singing as if nothing had happened. At the end of the topic he spoke with the audience. With a smile, while dodging other projectiles, the vocalist took the situation with humor and asked everyone to have a good time. However, in the end Holland lost his glasses. When he came down to sing “Cool to hate”, near the audience, someone took them off.

The problems did not end there. The press releases of the time indicate that there were long lines to access the ATMs, which were eventually looted. The bathrooms collapsed from the influx of people, causing the toilets to overflow. Thefts were registered from the supply trucks, cars that were taken and overturned and one of the sound towers collapsed due to the number of people who got on them. One thing was clear at Woodstock 99 ‘; there was neither peace nor love.

While the organization proceeded to evacuate the press and the public, the police and firefighters came to control what by that time had already become a pitched battle. Uncontrolled, furious, and drunk, many attacked souvenir shops, overturning cars and burning what they found in their path.